Kangaroos peek out of their pockets: The zoo welcomes new cubs. It is not clear when she was born

/ PHOTO GALLERY / Red-necked kangaroos, giant and red – young of all these species can now watch in the Prague Zoo. Some are just peeking out of the bag, others are already leaving it. 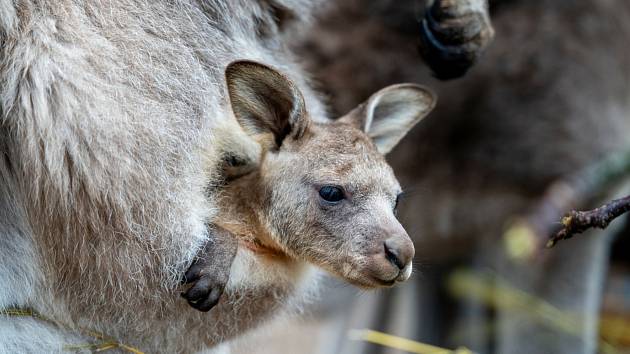 The Hagen kangaroo group has now grown to eight members with two cubs.

“In kangaroo cubs, we never really know when she was born. The newborn kangaroo is very small, completely bare, blind and has no hind legs. After giving birth, he has a long way to go to his mother’s pocket, where he sucks on his teat and then just drinks and grows. He starts poking his head out after only a few months, “Pavel Brandl explains the journey of kangaroo cubs to the world of mammal curators.

The most recent “peeping” addition boasts red-necked kangaroos in the through exposure of Darwin Crater – the cub stuck its head out of the bag only ten days ago. Huge kangaroos also share the enclosure with the latter. Their chick is “out of pocket” shortly after the first Christmas Day. even though he still drinks breast milk, he also tastes solid foods – bamboo leaves, grass and hay. Another young female of the same species has a local female in her bag, but she is still returning to her mother’s pocket, where her younger sibling is already growing.

SEE: Sobín was consecrated to a new chapel. The original demolished the truck

“Because each offspring needs a different breast milk composition depending on the stage of development, the female kangaroo can produce a different type of kangaroo in each teat,” explains Darwin’s crater breeder David Vala.

Despite their name, giant kangaroos are “only” the second largest species of marsupials. Red kangaroos hold the lead in size, and a total of three cubs can now be seen near the enclosure at the top of the Prague Zoo. At the beginning of January, one of the female Mošátko jumped out of her pocket and the other two peek out of the bags of females Miy and Karkulka. The name of this female kangaroo is more than appropriate – it has an unusually reddish coat, which is typical for males of this species.

The farmers’ markets in Prague are starting the season, they have had to start postponing on the embankment

Hagen’s kangaroos, who live in the zoo’s breeding facilities, are not far behind in breeding. Here, too, there are two cubs in the pockets of two females – the first stuck its head out of the vacuum at the end of January, the second in the first half of December last year. The older cub also often moves around the paddock, but still follows its mother.