Pedestrian Čeněk Topor scored in Prague. He is the second vice-champion of the republic

In the hall of Otakar Jandera in Prague – Stromovka, the PSK Olymp Praha section organized the MČR in walking for adults, juniors, adolescents, and pupils. 50 pedestrians and pedestrians boarded the 3000 m and 5000 m tracks. 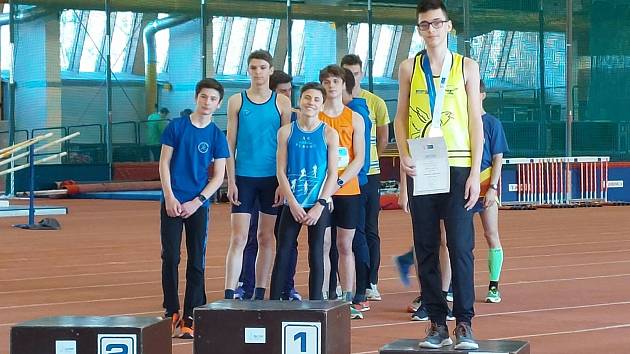 Orel Vyškov had only one pedestrian at the start, Čeňek Topor.

Čeněk was already one of the more experienced competitors in the starting field, who was commented on by Dr. P. Brandýs before the championship as follows: Thus, Šimon Václavík from Frýdek-Místek, this year’s discovery from AC Turnov Ondřej Plecháček, and Orel Čeněk Topor from Vyškov can use the precious metals far back. So that’s a challenge, it crossed my mind and in my mind I wished the prediction would come true.

The journey to Prague was smooth, there were multi-fights in the hall and we could admire the Czech athletic stars. For me, it was also beneficial in that I met an expert through walking: chief coach Čermáková, Mr. Brandýs, Mr. Lapka, Mr. Kratochvíl, Mr. and Mrs. Rein, nebo, or from ČAS D. Franklová and I could discuss a couple with them. valuable advice.

Success at the Championship of Moravia and Silesia in walking. Čeněk Topor won 1st place

Čeněk went through a registration processable, and after warming up a group of pedestrians, they brought him to the start. Shot – start – Cenda boldly came to the fore. “Hooray,” I said to myself, “Cenda has finally gone courage” and praised him for “good, stick with them”! It was as if Ondra of Trutnov heard it and began to “run” from them. No, they can’t run, that’s for sure! So Čeněk kept at least Šimon’s Frýdek-Místek. After the first kilometer, the referee stepped in front of Čenda and showed him the target for a bad knee. Hmm, there are strict judges in the republic, that’s what counts. And to Čend, as if someone had broken the eagle’s wings, his second opponent began to “run away” from him. “Chenda, hold on, put your hands down, you’re nice, come on” constant encouragement. And Cenda went, tried! He kept the third place and the performance 17: 51.17 ran in the hall on the track 3000 m. Eagle record, personal! Second vice-champion of the republic! That counts.

Eagle Athletic Balance. Looking back on 2021. He brought victories and losses

Congratulations to Cend and thank you for a wonderful experience and an exemplary representation of the Eagle.

Prague has relinquished vld and will open a center for refugees. It’s a mistake to Hib

Prague will reopen the center for refugees, she ordered her into government