Good marks for the Villeneuve-Loubet and Mouans-Sartoux cycle networks

According to the Barometer of Cycling Cities, the cities of the Côte d’Azur have great progress to make in terms of safety and comfort for cyclists. In the Alpes-Maritimes, Villeneuve-Loubet followed the top mark, closely followed by Mouans-Sartoux. We talk about it with Pascale Montrol-Amouroux from the Nice à Vélo association.

The Federation of Bicycle Users (FUB) recently published its 2021 barometer of cycling cities. This is a satisfaction survey conducted every two years to assess the quality of cycling networks in France. A large survey billed as ” the world’s largest citizen survey on cycling. For this edition, more than 275,000 people responded to the questionnaire and 1,625 municipalities appear in the ranking. In fact, the participants had to give a mark, from G to A+, on the performance of the cities in five categories: general feeling, safety, comfort, efforts of the municipality and finally parking and bicycle services.

At the national level, the barometer reveals that the level of development of cycle networks is deemed to be “rather preferred” to the use of bicycles. According to the FUB, the expectations of cyclists are changing faster than the pace of policies put in place by communities. In fact, 64% of respondents believe that the current conditions are bad.

Budding cyclists at the gates of Villeneuve-Loubet. ©Nathalie Michet

Two exceptions on the Côte d’Azur

Closer to home, on the Côte d’Azur, an observation is obvious: most cities are poorly rated ! Menton, Roquebrune-Cap-Martin, Beaulieu-sur-Mer, Vallauris, Le Cannet, Saint-Raphaël or even Roquebrune-sur-Argens are in the red with the worst score in the barometer: G, which corresponds to cycle networks “highly depreciated”. Nice, Vence, Antibes, Biot, Grasse and Fréjus do barely better with the “rather preferred” F rating.

Conversely, two municipalities stand out from the others with a “rather favorable” C rating. These are Villeneuve-Loubet and Mouans-Sartoux, the only towns in the Alpes-Maritimes to be noted in green in this barometer. Villeneuve-Loubet, equipped with secure cycle paths from East to West and from North to South, even achieves the feat of climbing on the third step of the podium on the scale of the Southern Region. In the Var, on the other hand, no municipality is displayed in green. 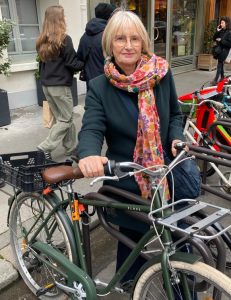 Pascale Montrol-Amouroux from the Association Nice à Vélo which organizes meetings every last Sunday of the month.

If the overall assessment turns out to be unflattering, it is above all because the infrastructures are considered insufficient or ill-suited, and this despite the kilometers of lane or cycle path announced with great fanfare by certain communities. The Nice Côte d’Azur Metropolis thus promises to trace 160 kilometers of additional cycle paths by 2026, in particular between Nice and Monaco. This axis is indeed very popular, including by commuters who choose the electric bike. There is also talk of increasing the number of parking points near public transport hubs and in car parks. A component intended to facilitate intermodality, an essential point to convince the population to travel by bicycle on a daily basis.

For its part, the Alpes-Maritimes department plans to invest 62 million euros in its “Mobility Plan 2028” in order to connect together the tracks that already exist. This will amount to tracing 84 km more, in particular on the coastal track between Mandelieu-la-Napoule and Menton, but also in the direction of the hinterland between Menton and Tignet. The program also provides for a better service to Sophia-Antipolis.

However, it remains to be seen whether the projects planned on paper will be carried out pragmatically, taking into account the needs expressed by bicycle users. How to make this practice more pleasant and less dangerous? What lessons can be learned from the BUF barometer? Pascale Montrol-Amouroux, member of Nice by bike association is the guest of the Club de Radio Monaco.

Journalist for Morning Made In Monte-Carlo on Radio Monaco every morning between 6:00 a.m. and 9:00 a.m.

how Monaco will have its reserve assessed

Gad Elmaleh, his son Noé in love: passionate kiss in Monaco with his companion