It is exactly 77 years since Prague suffered an incredible shock. Until then, the occupied Czech capitals avoided air raids, with the exception of several bombs hit the power plant in Holešovice in November 1944. But on February 14, 1945, when the end of the war was already in the air, a sudden unexpected blow came. A raid that marked the face of the city. Raid, there are still various controversies about the reasons in some circles.

That day, on Ash Wednesday, USAF 8th Air Force aircraft launched from a base in Great Britain. In total, there were four unions consisting of 1377 bombers accompanied by 962 fighters. Their tasks were different, but most of them were attacks on important transport hubs – railway stations or railway bridges. The targets were in Magdeburg, Wesel, Saxon Kamenice, but the strongest group of 462 four-engine flying fortresses headed for Dresden, where they were to complete the attack from the previous day, which was discovered there by the British RAF. However, a smaller group of machines separated from this union, which instead of targets in Germany attacked the cities in occupied Czechoslovakia. The bombs fell on Záluží near Most, Duchcov, Plzeň, but especially on Prague.

US sources say they attacked 62 B-17 Flying Fortress aircraft from the 398th and 91st Bomber Groups, which approached Prague five minutes and a half past southwest and dropped 152 tons of bombs in just nine minutes.

It was a fraction of the rest of the attacking machines, but the consequences were truly tragic. Military or strategic facilities that could be considered legitimate targets but were not hit. Several bombs landed only in the area of ​​the railway station in Smíchov or Vršovice, where they caused only minor damage. However, most of the bombs fell into the densely populated city center. The most affected parts were Vinohrady and Nové Město, but Smíchov, Vršovice, Nusle and Podolí were also affected.

City Statistics The Archive of the Capital City of Prague states that over 2,500 houses were hit, 68 were totally destroyed, 88 were severely damaged and 168 were severely damaged. The most affected vineyards recorded 21 houses destroyed, 41 very badly damaged and 59 badly damaged buildings. To those who paid the most for the raid, it is necessary to add the synagogue in Sázavská Street, which the Germans did not let go of the fire, and so the building was devastated by fire. Although its damage was not fatal, it was blown up in 1951 and a new primary school was built in its place.

But the worst were human sacrifices. The first census, taken four days later, mentioned 413 dead, 88 missing and 1455 injured. Gradually, the reports were refined, and after the end of the war, the numbers stabilized at 701 dead and 1184 wounded. Among the victims were 27 members of the Wehrmacht and 1 member of the SS. Among the last discovered victims of this raid are 23 people discovered in 1971 on the second basement of house number 1254 on Vinohradská třída, where Macešek’s famous sausage factory was once located. 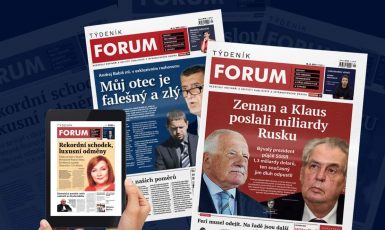 Celebrate your birthday with us! There is a discount for you and the new FORUM Weekly website

Why were the losses at the relatively small weight of dropped bombs so high? The first thing was that the people of Prague lived in the false belief that Prague would never be attacked, because the end of the war was about to fall. In addition, given the number of previous false alarms, people underestimated the seriousness of the situation and did not run from the imminent danger of hiding in anti-aircraft bunkers. And on this very day, the alarm was sounded late, just five minutes before the first bombs exploded. In addition, it became a tragic interplay of circumstances that several shelters were hit that could not withstand direct hit. This is especially the case for the shelter on Charles Square, which was fully occupied, and direct intervention here had really fatal consequences. The 16-year-old daughter of the famous painter Josef Lada also died here.

In addition, the farewell to the victims of the raid became a carefully staged theater directed by the Nazis. However, the Czech victims were separated from the German ones. While the official places said goodbye to the dead Czechs on the morning of February 18 in Vinohrady near the church of St. Ludmila on the then Reich Square, today’s Peace Square, the German victims were mourned in front of Rudolfinum on Mozart’s, today Palach’s Square.

Today we already know why a fatal mistake occurred. It was not an intention, but a coincidence of several tragic coincidences, the culmination was the unfortunate dropping of bombs on the Czech capital. The game was affected by unfavorable weather over Western Europe, where dense clouds made orientation and navigation difficult. Therefore, the aircraft, which later turned to Prague, first separated from their course at Lake Zuider in the Netherlands. The group’s chief navigator, Captain Harold L. Brown, dropped the onboard radar, so the group flew more and more to the southeast, until the deviation from the planned route reached approximately 120 kilometers. Due to a malfunctioning radar, the main navigator followed only the watch, the map and its comparison with the earth’s surface. It was therefore oriented mainly according to watercourses and larger cities. According to the original plan, they were to turn to Dresden in the area of ​​Cvikov, but due to the deviations caused, the planes were located near Pilsen at the time, from where they were supposed to follow the railway line that led them to Prague. Unfortunately, the Elbe in Dresden has a similar riverbed shape as the Vltava in Prague. This caused confusion and dropped deadly cargo. It must have been strange to the pilots, to say the least, that they were turning into a city that was untouched, while Dresden had been badly damaged by a British air raid the day before.

Almost immediately, the tragic consequences of the raid were caught by Nazi propaganda, which began to write about the cruel consequences of the “barbaric terrorist Anglo-American raid.” For example, on February 23, National Politics stated that “the murderous cynicism of the enemy has erupted exclusively on defenseless civilians, cultural monuments, hospitals, and urban neighborhoods.” 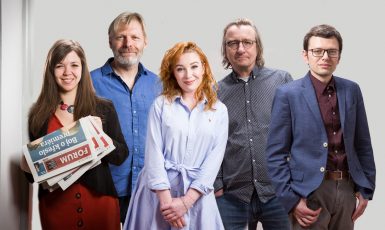 Let’s not be lulled! The weakened democracy is strengthened by the free media, and continue to support them

“Anglo-American terrorist pilots bombed some districts of the city of Prague at noon on February 14. The terrorist nature of this attack can be clearly seen from the fact that purely populated districts were hit. In addition to numerous apartment buildings, several hospitals, a women’s clinic and a children’s hospital, as well as culturally valuable buildings were also affected, ”said a CTK report issued shortly after the raid.

Similarly, however, this tragic event was later abused by communist propaganda. For example, in a book Americans in Western Bohemia in 1945, published by Karel Bartošek and Karel Pichlík in 1953, reads: “Just before the end of World War II, the US Air Force conducted barbaric raids on our homeland, which could not and did not matter for the military defeat of Nazi Germany and in which hundreds lost their lives. people, hoping for peace. The dead from the ruins of houses in Vinohrady and Pankrác and the ruined history of the memorable Emmaus are a calling exclamation point of the accusation of the American bombing of Prague at the very end of the war, February 14, 1945. “

Another, this time a new American raid on Prague took place on March 25, when factories in Liben and Vysočany and in Kbely, Letňany and Čakovice were bombed.

‹ Rain, sunny spells, wind: varied weather in Toulouse and Occitania, this Monday › A difficult victory for Lézignan in Avignon