The director of the video clip – Algina Bedulskė – gathered a team to fulfill the ideas of the clip. The dance composition was created by choreographer and dancer Brigida Penkevičienė, the choreography by dancers Juozas Veiverys, Grėtė Vosyliūtė and Simona herself, and the image was created by stylist Dovilė Cibulskaitė. The creative team of the 30-person recording and video clip united New York musicians and Lithuanian filmmakers.

The record was recorded by Mike Marciano, an award-winning Grammy-winning audio engineer, and Dave Darlington, a New York recording wolf who is well-known for his work with Sting, Wayne Shorter, Herbie Hancock and Miles Davis.

You can see the video here: 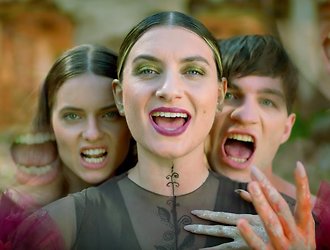 Bird language is a mixture of folklore and jazz, which combines improvisation, modern and traditional sounds of Lithuanian kankle, dance and breathtaking Lithuanian landscape. The clip shows exceptional views of Lithuania – Merkinė manor in Šalčininkai district (Republic of Paulava), Stone Sculpture Park “Vilnoja” in Sudervė town and “Vytenis Planned Park” still under construction, which will eventually become an amusement park for young families.

The track reveals a common theme for Simona’s latest album, which is called “Bird language”. Simona’s work is dedicated to nature and our connection with it.

“Press release” means the distribution of news releases about services, games, companies or institutions, etc., created by news agencies, legal entities and individuals. When deciding on the publication of information, UAB 15min takes into account topicality, public benefit and public interest. UAB “15min” is not remunerated for publishing this content. The editorial board has the right to edit, shorten, supplement and delete the links and titles in the text.

Landsbergis – about the status granted to him: Lithuania finally managed

The viscous history of Kaliningrad does not end: are Grybauskaitė’s accusations against Nausėda justified?