Omicron subtype not yet widely detectable in Austria

The omicron subtype BA.2 can be found in an increasing number of sewage treatment plant samples in Germany, but it does not seem to be spreading over a large area, according to the virologist Andreas Bergthaler in an interview with the APA. 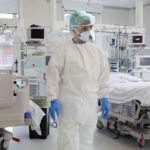 It is currently difficult to assess what role the sub-variant can play in the context of the omicron wave. When looking at the high number of infections and, fortunately, even lower numbers of hospitals, it is important to “remain cautious”.

The proportion of the new dominant variant Omicron has been increasing dramatically in Austria for several weeks – in step with the number of infections. Current data from the Department for Infection Epidemiology of the Agency for Health and Food Safety (AGES) indicate a proportion of 97 percent in the third calendar week, according to the data at the Medical University and the Research Center for Molecular Medicine (CeMM) of the Austrian Academy of Sciences (ÖAW ) working scientists.

The majority of the whole genome sequencing is carried out by the team led by Bergthaler, Christoph Bock and AGES. It also applies that although a large number of SARS-CoV-2 tests are carried out in Austria, the entire genome of the pathogen is examined less frequently than in pioneering countries such as Denmark or Great Britain.

Nevertheless, the waste water monitoring, which is very well developed in Austria, even allows conclusions to be drawn about the composition of the sub-variants. Since April 2020, a far-reaching research network has been looking for SARS-CoV-2 genetic residues in wastewater. There was also evidence of the sub-variant BA.2 from Omikron, which is on the upswing above all in Northern Europe. While it already accounts for around 70 percent of infections in Denmark, in other countries with a good overview of variants it is not so clearly established or even stagnates in some cases.

“In Austria we now find BA.2 from one week to the next in more sewage treatment plants”, such as in the Vienna area, Wiener Neustadt, Salzburg and in parts of Carinthia, Styria and Tyrol. However, the percentages in the three clarification analyzes where the first evidence was found did not increase in the earliest available samples and continued to average around eight percent. “Nevertheless, it does not affect the fact that BA.2 will prevail over time,” says the scientist. However, there is currently nothing to be seen of a BA.2 wave in the omicron wave.

The decisive factor remains whether another, possibly serious, clinical picture is associated with BA.2. According to Danish data, this should not be the case. The diseases rarely seem to progress as severely as in the case of Omicron BA.1.

It is fortunate that Omikron has not yet led to increased occupancy in Austria’s hospitals. If the number of new infections exceeds 40,000, this could change in the coming weeks. “It can be assumed that the number of hospital admissions will increase,” the virologist suspects: “I would still be cautious about dismissing Omicron as a mild infection.” To date, however, the numbers suggest that the wave could be managed with the capacities . It is still scientifically unclear what the high numbers mean with regard to “Long Covid”.

In any case, the genetic material analyzes also show that “Delta has not disappeared”. The question is whether, after the omicron wave has passed, delta, a certain subvariant of omicron “or a still completely unknown variant”, will again dominate the further infection process. A certain coexistence is also conceivable, because the Delta variant has also proven to be likely to be changeable in the six months it has been in our latitudes: “The Delta that we have now is not the Delta from six months ago. “

Looking to the future, the expert now sees “strong efforts” to put crisis management on a basis: “It seems to me that we are on the right track in some areas, but we haven’t gotten there yet.” In communication with the population – for example for vaccinations, in the speed of obtaining information and decision-making as well as in dealing with data, their exchange, their processing and linking, there are still many challenges that will hopefully be overcome by autumn.

In order to keep an eye on the development, Bergthaler sees great potential in the analysis of sewage treatment plant samples – also for questions after the pandemic. The wastewater offers the opportunity to discover a large number of potentially circulating infectious agents and thus to make a future contribution to the public health system.

Alpine skiing: New season with lots of Austria and overseas

‹ Bitter oranges, anatomy, Dark Star… What to do in Monaco this weekend and next week? › Review of the week with Ivaylo “Noisy” Tsvetkov and Yuliana Doncheva – Politics – Bulgaria – Your day