Ospedaletto Euganeo. The Carabinieri of the TPC Unit of Venice rico

Four sacred works were recovered by the Carabinieri of the Nucleo for the Protection of Cultural Heritage (TPC) of Venice, coordinated by the Public Prosecutor’s Office at the Court of Padua, as part of specific art market control services aimed at preventing and obtain trade in cultural goods of illicit origin.

The works had appeared on the antiques market during the summer, sold by a Lazio auction house. The soldiers of the TPC Nucleus of Venice, contacted by the unsuspecting buyer, compared the images of the assets under auction with those contained in the “Data bank of illegally stolen cultural assets”, thus identifying the sculptures.

The investigations carried out by the TPC nucleus of Venice made it possible to reconstruct the history of the statues: after the theft and receiving stolen goods, the works had been the object of various properties, which had affected various Italian regions, up to Lazio passages to a Lazio antiquarian. Furthermore, in their wanderings, in order to mask their origin, they were deprived of their most superficial white color, thus presenting themselves as gold.

16 years after the theft, the Carabinieri TPC of Venice will thus be able to return to the Curia of Padua and to the community of Ospedaletto Euganeo the four statues representing the saints, of great devotional value. 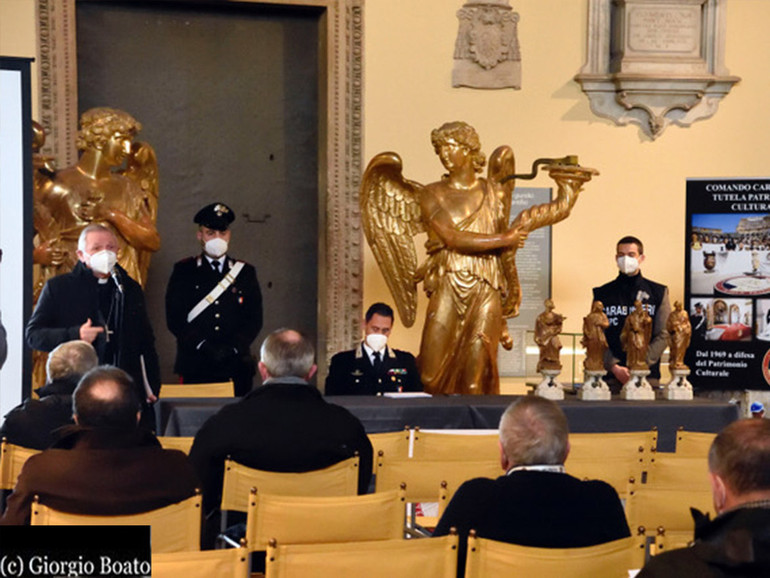 ‹ Unusual: the 150-tonne entrance door to the Necker hospital sold at auction near Toulouse › Charlene of Monaco addicted to a dangerous cocktail of sleeping pills, Albert breaks the silence