Florence, foray into the car of the anti-mafia prosecutor Nastasi: he is the owner of the Open investigation, in Siena he had dealt with the death of David Rossi

In the night between Wednesday and Thursday someone opened the door of thecar, parked under the house, and left there rear light. It is the description of the mysterious raid in the vehicle of the public prosecutor of the Anti-Mafia District Directorate of Florence, Antonino Nastasi, currently the holder of the investigation into Open Foundation from Matteo Renzi together with the deputy attorney Luca Turco. Nastasi, moreover, when he was on duty in Siena had dealt with the investigation into the death of the MPS manager, Davide Rossi.

From illicit financing to corruption cases, all the accusations and facts disputed against Renzi and his “Giglio”: this is why the Open investigation is not a ‘media trial’

The news was published today (Saturday) from Florentine courier, explaining that the assignment of an escort the magistrate will be examined by the next committee for public order and safety. The episode and its nature are in fact still to be clarified: on Thursday morning the prosecutor Nastasi, who lives in the countryside, reported annex police to have found the car with a door open and the rear light on. From the Vehicle nothing was taken away, not usb keys with music. The light could not have been turned on accidentally nor could it have been forgotten since no one has been sitting in the back seat for weeks. The magistrate’s car had been regularly closed the night before and the light was definitely on spent. For this moment it is not excluded that it may speak of a intimidating gesture. The complaint presented by Nastasi always reads on Florentine courier, will be transmitted to the prosecutor of Genoa, competent to investigate crimes committed against a magistrate serving in Tuscany.

Nastasi is the second magistrate in a few days to come to the attention of the committee for order and security: the protection for the deputy prosecutor was decided on Monday Luca Turco, vicar of the chief prosecutor Giuseppe Creazzo, owner of the hottest inquiries of the Florence Public Prosecutor’s Office, from the one on the Open Foundation – conducted together with Nastasi – to the one on the mafia massacres, together with the other deputy prosecutor Luca Tescarelli. 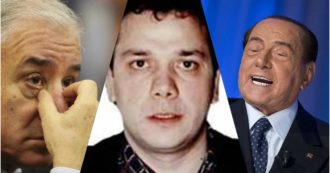 The boss Graviano to the prosecutors of Florence: “There is a written paper on the economic relations between my family and Berlusconi. 20 billion invested “

After being six years pm in Siena – where he conducted the investigations on Monte dei Paschi, on the Mens Sana Basket and on the football team – Nastasi has been in Florence for four years where he joined the anti-mafia prosecutor. In addition to the investigation Open in Florence is dealing with Tescaroli investigations on piloted competitions at the Faculty of Medicine. Nastasi was also among the prosecutors who participated in the investigation into the death of David Rossi, which took place in March 2013. Just a few days ago he had been summoned by the parliamentary commission but then the hearing was postponed due to the imminent election of the new one President of the Republic.

Support ilfattoquotidiano.it: if you believe in our battles, fight with us!

Hold up ilfattoquotidiano.it it means two things: allowing us to continue an online newspaper full of news and insights, free for all. But also to be an active part of a community and to do one’s part to carry on together the battles we believe in with ideas, testimonies and participation. Your contribution is essential.
Support now

Judicial year, criticism of the Cartabia reform from Turin to Naples: “Non-passability? How to set a maximum length of stay in the emergency room “

University of Siena: three days to talk about Europe at the Certosa di Pontignano

Ruby ter, the Prosecutor of Siena appeals against the acquittals of Berlusconi and Mariani

‹ the planetarium of the Coupole d’Helfaut has finally reopened › Ineos Will Fall does not give up: “Plastic produced with fossil fuel simply cannot be produced in an environmentally friendly way” (Antwerp)