“My Praguers understand me. ”In Mozart, he finally entered the hearts of the inhabitants of the Czech capital. She had a reason. Just like everywhere else in Europe, where he gave concerts, i in Prague, his famous music, which he composed with ease, aroused unprecedented upliftment and admiration.

At the age of 31, when he first visited Prague, paid for genius – an original composer of world parameters. Few composers are so well known and revered to this day, which results in, among other things Oscar-winning film Amadeus from the less famous Czech director Miloš Form († 86). Mozart just celebrated success in Vienna with his Figaro’s wedding. It was its introduction that attracted composers to Prague in the early 1787. first, but not for the last time.

Because of the money?

The premiere of Figaro’s wedding took place in Vienna on May 1, 1786. Surprisingly, shortly afterwards, in a strange way at her extraordinary success with the audience and Emperor Joseph II (d. 48), there was talk of her launch in Prague. For Mozart, it wasn’t so much a matter of prestige. He was in debt at the time, so heone hundred ducats to ensure a rerun of the performance in the Czech capital“, Came as the professor of music history Claudio Casini states in the book Amadeus: The Life of Mozart.

Or because of love?

The other side remains that Mozart was already married to Konstanza Mozart at that time († 80), his ancient love lived in Prague, singer Josefína Dušková († 69), whom he met at the age of 20 in Salzburg, Austria. At the time, “he gave her the aria Ah, lo previdi (Oh, I knew it) when he heard her sing at a concert,” says Casini.

“He was born among them a relationship that was destined to last a lifetime. When Wolfgang left for his mother in Munich, “Casini returns to 1777,” the rumor spread throughout Salzburg that he left to follow Dušková to Prague. “

It was not the case – Dušková was experiencing the first years of her marriage to František Xaver Dušek († 67) at that time, and Mozart continued the mischievous life of a whimsical but ingenious composer, who one day also settled alongside another. However, when Mozart visited Prague 10 years later, with his ancient love, for which, according to Casini, he always had a “weakness,” did not forget to meet. Later, he even stayed at her Bertramka residence for a while, and they stayed in touch for the rest of Mozart’s days.

However, let’s go back to 1787, when Mozart visited Prague in the winter for a concrete one invitation of Count Jan Josef Thun-Hohenstein († 76). „8. January 1787 Wolfgang and Constance left Vienna for Prague with a group of friends, “says Casini. Three days later, after stopping along the way, they gradually stopped in Znojmo, Jihlava, Čáslav and Cologne, passed through the gate of the capital of the Czech Kingdom.

“In Prague, Wolfgang received a great reception both for the success of Figaro’s wedding and for the usual Masonic hospitality,” says Casini. “He lived in the palace of Count Thun in Malá Strana, in the ancient quarter on the left bank of the Vltava below Hradčany. ”With a probability equal only certainty, as the Thuns had several palaces in Prague, it was the palace in Thunovská Street just below Prague Castle, where the embassy of the United Kingdom of Great Britain and Northern Ireland is located today.

Not only Praguers were Mozart, Mozart was also Prague and its inhabitants excited which he soon described in correspondence. “He reported to a friend about a triumphant welcome in PragueCasini writes. “Count Thun immediately invited them to lunch, followed by a concert lasting a year and a half, in the afternoon a big ball in the palace of Count Pachta, the most respected of the great aristocratic family in Prague. ”We are talking about František Josef Pacht from Rájov († 89), who has held numerous important positions during his life – from. vice-governor of the Czech Kingdom to the President of the Czech Regional Court. He hosted Mozart repeatedly in “his” palace on Anen Square.

Wolfgang Amadeus was then “pleasantly surprised that the dance music was inspired by themes from his Figary, transformed into contradictions and alemandas, “says Casini, who lets Mozart share his impressions in one of the letters:” Because he speaks of nothing but Figaro, it is not played, it is not played, it is not sung and nothing is written but Figaro. They don’t go to an opera other than Figaro, still only Figaro. “

He first presented this to the people of Prague for the first time at the Estates Theater, then called the Nostic Theater. The very classicist look and genius loci of the pompous building has already made the composer huge impression. The theater was also behind the reason for its relocation from the castle grounds to the Old Town.

Estates Theater 2019: The original red-white-gold color of the decoration was changed to white-gold-blue in the 1920s.

With his luggage, he headed “to a hotel called At the three golden lions at the Coal Market in the Old Townto be as close as possible to the Nostic Theater, where his opera was performed, “says the professor of music history. “He could see the theater from the windows. Nearby was the large dormitory of the Clementinum, where he was introduced to visit by a learned priest. “

The promise of better times

Mozart felt in Prague again loved AND recognized by the audience, especially then appreciated. Not that he did badly in his “home” Vienna, but all the time court intrigues complicated his life just as you can’t find a permanent place. He dreamed of becoming imperial court composer, however, Joseph II, who was otherwise extremely sympathetic to Mozart’s talent, preferred the Italian composer Antonio Salieri (d. 74).

“Prague brought him recognition, which Vienna denied him, ”Says Cass, noting that although Mozart enjoyed success, The “glory” there was fleeting, as one successful opera was soon replaced by the reputation of the new opera. But Prague? “It simply came to our notice then provincial town, in which it was still valid Mozart’s glory from earlier years, ”Says Casini. “But the enthusiasm of the people of Prague was evoked mainly by their sincere affection for Mozart’s music. The Czechs were (…) more subtle music connoisseurs. “

It was not just the prestige that Mozart received in “Mother of Cities”. For example, for a concert he gave in Prague on January 19, the first of which was his freshest at the time symphony called Prague, received thousand gold, “for him needed like never before“. At the same time, he received an order for a new Italian opera, which was to be performed in Prague in the autumn of the same year.

Mozart kept his promise and therefore The Estates Theater became the site of Don Giovanni’s world premiere, one of the most magnificent musical works of the modern age. Later, the world performed another of his famous operas here. Therefore, when he returned to Vienna during the first days of February 1787, after about a month in Prague, he could say to himself:My Praguers understand me. ”And they really understand the expectations to this day. Because although Mozart has been resting in an unmarked grave in the cemetery of St. Mark in Vienna, his marriage of Figaro is still performed at the Estates Theater. 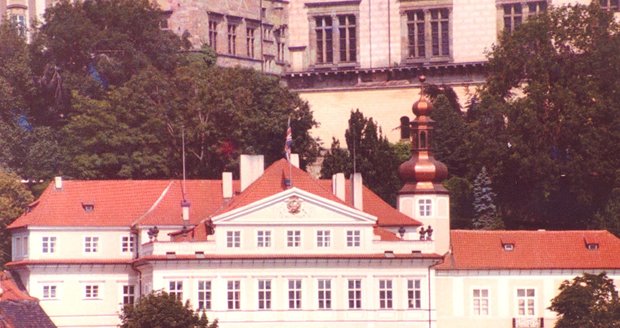 There is an enviable view of Thun Palace, where WA Mozart used to live. However, it is much nicer from its higher floors to the whole of Prague.

Author: Embassy of the United Kingdom of Great Britain and Northern Ireland

‹ Hungary would support Ukraine’s NATO membership, but… › Slovenia will reduce its self-isolation to 7 days from Monday