Violations of weapons law: hunters and collectors targeted by the judiciary – Liechtenstein

VADUZ – The new rules for weapons have apparently not yet reached all Liechtensteiners. And the police are very careful. Violations of the weapons law at the district court are currently booming. Yesterday, both the gun fan who loves to collect and the experienced hunter demanded responsibility for illegal equipment or the wrong storage of guns. “I didn’t know” was not accepted by the court.

In the first case, which was heard yesterday at the district court, a Liechtensteiner had to sit in the prosecution chair for four offenses and violations of the weapons law. The state police had several improperly stored hunting rifles and ammunition in his apartment in August – one of them was even ready to hand in a gun bag in the bedroom. The officers also confiscated three illegal silencers and an illegal rubber baton during the house search. The passionate hunter was extremely remorseful in front of the judge: “I made mistakes and I stand by them.” He had just grown up with weapon handling, which is now considered improper, as the accused explained: “I live alone and didn’t think anything of it.” At the same time, the man confirmed that the storeroom where most of the guns and ammunition were found was at least locked.

“I just forgot about that”

Several weapons and the three illegal silencers were his father’s heirlooms that “just lay around” – including several “poaching rifles”. “Of course I don’t go poaching,” said the Liechtensteiner, dismissing the judge’s curious question and smiling. “But as a child I was there from time to time.” The defendant understood very well that he had not kept the weapons in accordance with the law – i.e. well secured – and vowed to do better. In addition, that he failed to submit the relevant papers to the state police after the sale of some weapons, as the law actually requires. “I just forgot,” said the hunter.

With a look at the rubber baton, the accused reported that it had been hanging unused on the same key board for more than 40 years – but “without justification, that’s right,” as the man showed himself remorsefully here.

With the gun ready to hand in the gun bag in the dining room, he explained that he was about to go hunting with it and had taken a shower beforehand when the state police knocked and seized the guns and gun parts. Prosecutors believed the man and eventually dropped the point from the indictment.

The court was also very benevolent towards the accused – not only because of his probably white vest, but also because of his confession to be judged. The regional court proposed a diversionary agreement, which both the man and the public prosecutor agreed to: With the payment of 1000 francs, the hunter was forgiven for the two offenses against the weapons law (silencer/baton) without a verdict. However, this was not possible for the two violations (improper storage/non-reporting after the sale of the weapon). Here the judge imposed a fine of 500 francs. Together with the procedural costs of 300 francs, the hunter can also put the adversity behind him with a payment of 1800 francs – without an entry in the criminal record. “God knows it’s not a big accusation – with hardly any criminal energy behind it,” as the judge himself had to admit. “We’re definitely not dealing with a criminal here.” There are completely different cases.

Whether the judge meant the trial against the shooters, who had startled the lowlands several times in the summer with salvos fired like a machine gun and were finally caught at the Vaduz Rhine dam, remained open. This hearing should also have taken place yesterday, but had to be postponed at short notice due to the defender’s illness. The trial against a second Liechtenstein citizen, on whom the state police had found a gas pressure gun, was also adjourned – which led to charges of illegal gun ownership and improper storage. Because the invitation to the court date had not reached the defendant in a timely manner, the judge allowed him some leeway to coordinate with a legal representative.

Yesterday, however, a third Liechtenstein citizen appeared with a lawyer at the district court, who was also accused of several violations of the weapons law. During a search of the house, the state police had discovered, in addition to narcotics, another weapon that was prohibited or required a permit – all of which, according to the indictment, were improperly stored in his room: in addition to several switchblades and folding knives, daggers, throwing stars or batons, two revolvers and a pack of ammunition

The gun collector was just as taken with knives as pistols. (symbol photo: SSI) 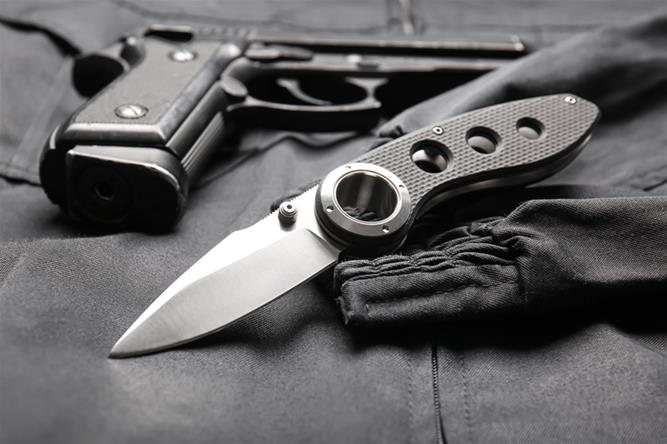 The gun collector was just as taken with knives as pistols. (symbol photo: SSI)

“I’ve been collecting these since I was young – mainly knives and gas pressure guns,” explained the man who works in agriculture. Later he would have received the offer to buy two “real pistols”, which he then took advantage of. “However, nobody told me at the time that I had to obtain a permit for this in this country and I didn’t deal with it either,” as the accused justified himself to the judge. “I just didn’t think about it. If I had known that, I would definitely have gotten a gun license.” Incidentally, he never fired the pistols.

“You have to inform yourself!”

The man was also remorseful about the drugs found after an inglorious past: “I haven’t used marijuana or cocaine for years.” In view of his current work-intensive job – seven days a week with only one week’s holiday – that would no longer be possible. His defense attorney again pointed out that the weapons found would be old stock, which would have been free in the past. “My client was simply not familiar with the changed gun law.” The district court is not responsible for the ignorance of the man. “That doesn’t protect,” said the admonishing judge. “You have to find out about the applicable laws.” For offenses against the Weapons Act, he subsequently pronounced a fine of 100 daily rates of 10 francs – albeit conditionally for three years. The accused has to pay a fine of CHF 1,000 for the improper storage of the weapons and the narcotics found. The verdict is not yet legally binding.

Hilti increases sales by over 5 percent by April – Liechtenstein