Thessaloniki: He got infected with coronavirus and went to work normally in the public market …

A fruit seller in Thessaloniki was found positive for the coronavirus the day before yesterday and one day after his counter in the public market. As he said, he had to do it for financial reasons, but is now required to pay a fine of 5,000 euros.

Speaking to Mega and the “Live News” show, the 42-year-old explained that he tried to find a replacement but failed. Eventually, he found a man to sell this merchandise but could be on the counter after nine in the morning. So the producer went to the popular normally, stood on the edge of the market and not in his post and waited. The other derivatives were amazed by the image, asked him what was going on, he answered them, called the Authorities and was fined. 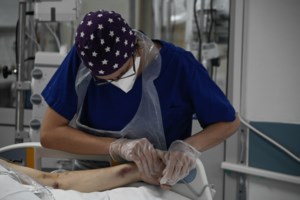 Apostolos Kakaloudis noted that he is not going to pay the amount because he has no money and can not do otherwise. “I had to go out for work,” he concluded, revealing that I have not been vaccinated, as he stated, he is afraid.

“The rest of the family is vaccinated” he added and stated that he was ill for a third day, without any symptoms.

Thessaloniki: The murder of the 36-year-old real estate agent with a specialist vascular surgeon in the Court of Appeal

The 17-year-old who had disappeared in Thessaloniki was found

‹ The Nordic left is back in the lead › Breaking News | The attacker who killed Nurse Ömür Erez was caught! If it’s the first time…