Hostinec Na Slamníku: it got its name from the ancient tailoring tradition

/ PHOTO GALLERY / Pub Na Slamníku is one of the oldest still functioning facilities in Prague. You would find it on the corner of Wolkerova and Gotthardská streets in Bubeneč, Prague 6. Its history dates back to the middle of the 17th century and is full of surprising twists. 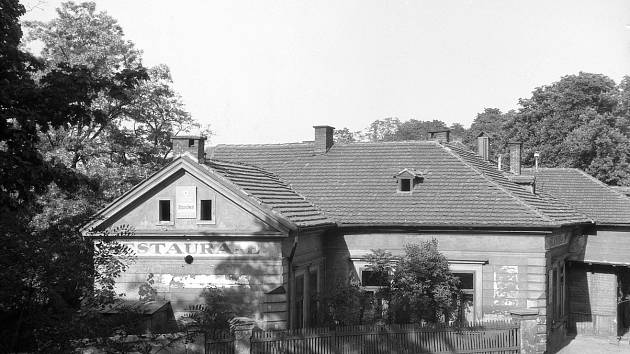 | Photo: from the collections of the Museum of the City of Prague

Like other businesses outside the center, she used to be a coaching inn, where after a long journey rested formans, pilgrims, but also people who went to Prague to see the coronation or other big event. Its original name was Dolejší krčma and it also included a smithy, a barn, fields, vineyards and the whole garden. In 1741 the land was filled by French troops and only the building remained of the entire estate. She often changed owners and tenants. One of them, a certain Franz Albitz, was expelled not only from the pub but also from Bubeneč at the beginning of the 19th century, because he liked noisy parties even after dinner, which was then set for midnight.

The company got its unconventional name in the first half of the 19th century after the “Straw” festival. For this occasion, the Prague tailors and their assistants made a straw mat, ie a mattress made of canvas, stuffed with straw and fastened to long poles. They adorned it with bows, cuts of colored fabrics and embroidery of the girl and the young man. The masquerade was carried in the procession every Tuesday after Easter from the Bruska gate to Bubeneč. There the procession hung her to a pub, where people danced around her and beer flowed. The tailors welcomed the spring and sang the marriage. The riotous merriment attracted local visitors from all over Prague, but according to the memories of the witnesses, they brought every immigrant back to the appropriate limits.

In 1876, the Bambásk family bought the company and remained in their ownership until 1956, when it was nationalized. During the First Republic, Emil Hácha, the later president during the Nazi occupation, then the president of the administrative court, was a frequent guest here. Thanks to the concentration of “subversive elements”, the popular pub became a thorn in the side of the communist regime, which tried to turn it into a classy wine bar in the 1980s. The interior underwent a number of changes, but the experiment came out only a few years before, due to low attendance, the gates of the good old pub reopened. Its history is also connected with all sorts, mostly alternative concerts, which took place and still take place in the local hall. A few years ago, the pub underwent extensive renovations, but most locals agree that the original genius loci has been preserved.