Farmers near Jesenice set fire to straw, protested against changes in subsidies

/ PHOTOGALLERY / Farmers set fire to a pile of straw on Thursday near Jesenice near Prague in protest against changes in the setting of subsidies. 30 trumpet tractors drove past the happening site. The event was attended by about 50 people, a large part of whom were journalists. Representatives of agricultural organizations disagreed with the planned changes and called on the government to act. “We do not want to divide farmers into small and large,” said Jan Doležal, president of the Agrarian Chamber. 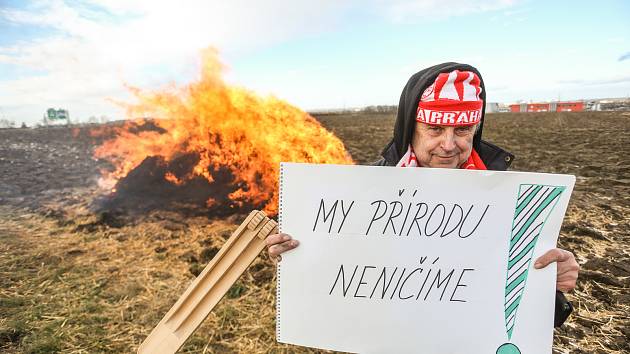 Farmers protest in Vestec near Prague on Thursday, January 20, 2022.

The event, which took place between the fields by the road between Vestec and Hodkovice, was part of today’s protests in other parts of the Czech Republic. The chairman of the Agricultural Association, Martin Pýcha, stated that hundreds, perhaps more than a thousand tractors and other agricultural machinery drive on Czech roads today. “We are still calling on the government to deal with us,” he added.

The participants wanted to symbolically show that “it is high time to involve mainly representatives of the professional agricultural community in the discussions on the change in agricultural policy”. The burning of straw was supposed to symbolize the speed with which the government can now influence Czech agriculture for many years. The event was disturbed by wind and cold. “The weather does not suit us and we can say that the current government does not want us either,” Doležal said.

We are on the verge of strength, teachers warn. Numbers of positive tests in schools

According to agricultural organizations, changes in subsidy policy unfairly favor small farmers. Agriculture Minister Zdeněk Nekula (KDU-ČSL) said on Wednesday that he did not deny anyone the right to demonstrate, but refused to give in to pressure.

Representatives of the governing coalition agreed last week to change the subsidy rules for the years 2023 to 2027. The Ministry of Agriculture originally planned to determine the maximum amount of subsidies for large agricultural holdings. In the end, it backed down, but increased the share of money earmarked for smaller farmers. It also limited the maximum amount of investment subsidies from 150 to 30 million crowns.