SEE: The renovated vestibule of the metro at Knížecí will be a gallery by the end of the year

The Na Knížecí metro vestibule has been transformed into a gallery. The city with the transport company and the Gallery of the Capital City of Prague is organizing the exhibition Past Future here. Its main theme is the Prague metro and passengers will be able to see the exhibited works in the renovated showcases right in the lobby until the end of this year. 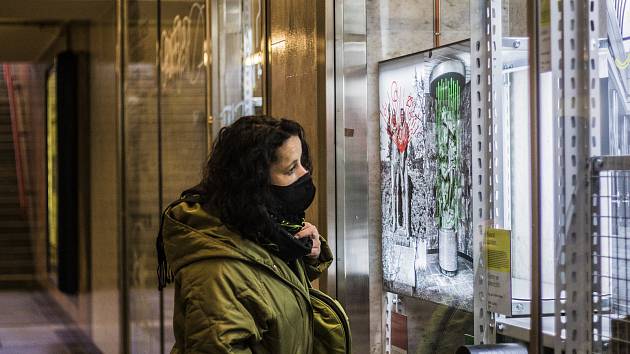 The Na Knížecí metro vestibule has been transformed into a gallery.

The former, somewhat run-down idea of ​​the futuristic metro of the 1970s is portrayed here as the story of Jules Verne. The aim of the exhibition is for the passing spectator to have a different perspective on materials and works of art through sci-fi and a futuristic vision for the Prague metro.

The exhibition offers several perceptual and optical, interconnected, or overlapping layers or plans. The authentic layer or reality consists of spatial objects and photographs, actually used materials from the Prague metro, building and architectural prefabricated parts, parts of works of art and interior accessories. Another layer, according to the creators, are the well-known ceramic, glass and stone tiles of the metro, around which every passenger walks daily.

The last content layer consists of information text, definitions of terms and descriptions of exhibited objects, which will help viewers with orientation in time and space.

The exhibition in the lobby at Knížecí stanice metro Anděl can be seen from 18 January to 31 December 2022. The author of the concept and graphics is designer Adam Tureček, curated by Anna Švarc and Marie Foltýnová. “During the year, we moved only in the above-ground areas of the Prague metro as part of the city change. This exhibition is part of the metro itself and is a kind of tribute to its housing phenomenon, which ensures our daily life, “says Magdalena Juříková, director of the Gallery of the Capital City of Prague.

“The space of the vestibule, which was cleaned of commercial installations from the 1990s during the reconstruction, could be an optical game with an exhibition, which we would like to supplement with a spatial installation of the work of art or occasional presentation of artistic performances,” adds curator Anna Švarc.