/ PHOTO GALLERY / According to the owner, it has long been called Hotel Šroubek. However, a luxurious company hid under an inconspicuous name during the First Republic. The views of pedestrians on Wenceslas Square have been attracted for a good 115 years mainly by its impressive Art Nouveau façade. Currently, the owner of the building is trying to return the glory to its interiors. 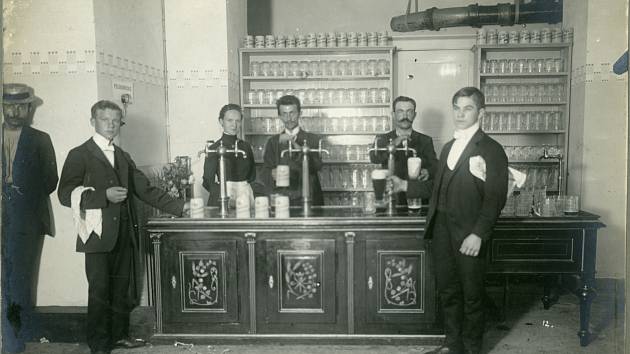 | Photo: from the collections of the Museum of the City of Prague

The hotel on Wenceslas Square was established in these places as early as 1872, when it replaced the old coaching inn. The design was undertaken by the famous architect Josef Schulz, author of the National Museum and Rudolfinum. However, the then appearance of the company did not last very long, in 1905 it was rebuilt in the Art Nouveau style. It was bought by Karel Šroubek in 1924 and for a long time no one called it anything other than the Grand Hotel Šroubek.

The hotelier advised the presidents

Šroubek came from a poor village family, but his determination led him to the hotel industry. He opened his first business in just thirty years. When he bought an Art Nouveau building on Wenceslas Square 15 years later, he was already a rich man, but he certainly did not intend to be idle. In the foyer, he added an additional service of Czech glass and grenades and personally contributed to the comfort of the guests. To learn from his mistakes, he handed them a satisfaction questionnaire written in several languages. He is so famous for his interest in etiquette that he became an advisor in organizing official events at Prague Castle.

At present, we find proof that this is a comfortable company in Central Europe. The truth is that the level of Prague hotels was low at the end of the empire and in the early years of the First Republic. Hotel Šroubek boasted, for example, running hot water, central heating and an elevator, which was not quite common at that time. He even had primitive air conditioning that worked on the principle of the ice water cycle. But the rooms were cramped and the toilets of many of them were in the hallway. The hotel was overwhelmed by the decoration: it was one of the most beautiful Art Nouveau buildings in the city. That is, after all, to this day.

However, the guests did not just spend moments of rest in the hotel on their way to the beauties of Bohemia. Its history is rich in important events. In 1912, the writer Franz Kafka organized his only author’s reading here. Before World War II, British businessman Nicholas Winton lived in Šroubek and spun his plans to save Jewish children from the threat of Nazism.

SEE: The renovated vestibule of the metro at Knížecí will be a gallery by the end of the year

In the early 1950s, the company was nationalized and became the Grand Hotel Evropa. Mr. Sroubek died four years later and the family emigrated to Canada. His work then fell into disrepair, although it still welcomed influential guests. After the Velvet Revolution, the building was restituted and subsequently sold. A major reconstruction has been going on for several years now, which should hopefully be completed this year.