The trial of a sports journalist, blogger and player of the Minsk football club “Krumkachy” (“Crows”) Alexander Ivulin, who has been behind bars for more than seven months, Monday, January 17, in the Belarusian capital. Ivulin, who was recognized by human rights activists as a political prisoner, is accused of organizing actions that violate public order. If found guilty, he faces up to four years in prison. In addition, Minsktrans billed the journalist for 39,000 rubles (over 13,000 euros).

On the first day of the hearing, Alexander Ivulin, in response to a prosecutor’s question, confirmed that there were no calls in his YouTube video to “do something and change it.” He also denied accusations of fees in the commercials “negative assessment of the current government.” See DW for details.

The beginning of the hearings of the Ivulin case

Alexandra Ivulina accuses that on the ChestnOK Youtube channel from August 2020 to March 2021, he met “video recordings of an inciting nature with the aim of conducting destructive activities” in order to “aggravate emotional tension in society, create a negative assessment of the current government and discredit Republic”. Belarus in the international arena”. It is also believed that he persuaded citizens to commit acts that grossly violate public order.

In addition, journalists are charged with participating in protests on August 23 and September 27, 2020. During the hearing on the first day of the process, Ivulin did not deny what is currently observed during the recovery period in places subject to criminal prosecution in his case, but he condemned the accusation of initiating a case in the videos of “negative assessment of the current government and discredit” of Belarus.

Ivulin answered this way: “I can say that after watching my videos, people began to go to stadiums.” My favorite story: a woman from small Chechersk, 300 km from Minsk, after watching a video on the channel, decided to send her child to training at FC Krumkachy.

The hearing of the case continues on January 18.

It should be reminded that Aleksandra Ivulina, a Tribuna.com journalist, author of the ChestnOK YouTube channel about Belarusian football (both the website and the channel of the Belarusian authorities were recognized as extremist. – Red.), who in 2021 tried himself as a player in the first league club Krumkachy, was detained on June 3, 2021, not far from his home. At the same time, the cameraman Yaroslav Pisarenko was also detained, together with the animals Ivulin rented an apartment. Wallpaper was condemned for the fact that a white-red-white flag was hung on the windowsill of the apartment. Pisarenko received 15 days of administrative arrest, Ivulin – 30. “There was a note in the protocol that we found a flag was hung out as a sign of solidarity with Roman Protasevich. This was Sasha’s second detention (the first time was on November 15, 2020 during a rally in memory of Roman Bondarenko in Minsk, then Ivulin was fined 30 exceptional values ​​( about 270 euros). Red.), – says Yaroslav Pisarenko. – In the police department against us, that if we admit guilt, we will give less time. We decided that we would not admit anything. How can you say that the flag was hanging if there was none? After the administrative arrest, I almost immediately left Belarus, I really hoped that Sasha would also be released.”

On July 9, it became known that he was being charged with “organizing group actions that grossly violate public order” (Article 342 of the Criminal Code).

The detention of Ivulin saved many

Yaroslav Pisarenko admitted that he still does not understand the reasons for their detention and Ivulin’s high concentration of attention – by this time on ChestnoK he practically did not look for materials about the persecution of Belarusian athletes for a wide range of motives, Ivulin focused on the reality show about Belarusian football “A Sasha”. exodus?”, which he launched when he started playing for “Krumkachy”. 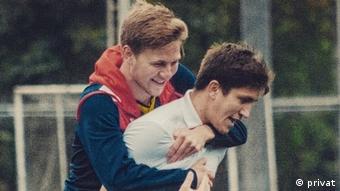 “I admit that this is jealousy on the part of Belarusian officials.

In turn, the author of the Life-Raspberry YouTube channel, Nikita Melkozerov, who once also worked in finishing publications, believes that the detention of Ivulin’s cause is a plot in support of Krumkachi goalkeeper Alexei Koltygin. At that time, there was a trial in the case of his brother Pavel Ovcharov (sentenced to five years in prison, recognized as a political prisoner. – Red.).

“The authorities have a clear, undisguised phobia regarding any form of public participation. I also decided to leave Belarus.

Support for athletes and fans

Soon, Alexander Ivulina was more than once interested in Belarusian athletes, as well as football fans. During the Krumkachi matches, the fans at the 25th minute (Alexander played under the 25th number) raised their T-shirts and white sheets with this number and chanted “And Sasha’s outcome?” Solidarity with Ivulin did not go unnoticed – riot police began to be on duty at football matches, fans in T-shirts with the 25th number were let in at the expected stadium, some were even detained.

Journalists also actively meet Belarusians abroad. On September 26, the “Alexander Ivulin Cup” was held in Scotland, organized by the People’s Consulate of Belarus in Edinburgh and the human rights organization Libereco. Representatives of the Belarusian diaspora and artists from Scotland took part in the tournament. Football match of solidarity of athletes also Belarusians of Bialystok with the Polish team Fortecy No.

On the eve of operations on the turnover of Ivulin took place in Poland, Lithuania and Ukraine. Posts dedicated to journalists were made by many athletes. “You are the one who did more for Belarusian football than he did for himself during the entire time of his capture,” wrote gymnast Semyon Bukin. “Sasha, you are the most innocent person that I personally know, but for some reason you are the heir,” said the athlete Yana Maksimova.

If found guilty, Alexander Ivulin faces up to four years in prison.

10 million tons of food worth $5.4 billion were exported from Russia to Kazakhstan, Belarus, Kyrgyzstan and the Army in 2021