The Bolzano breaks through the Steffl Arena in Vienna

The Bolzano conquers another, very important victory in the overtime, conquering the Steffl Arena in Vienna for 1-2 thanks to the goal of captain Bernard arrived just 4 seconds from the end of the extra time.

Fairly balanced start of the game, then Vienna tries to be seen with a shot from Antal which, fortunately, does not create big problems for the Foxes. The first penalty of the match also arrives almost immediately and is against Vienna, with Hackl being sent to the penalty bench for a foul on Catenacci; with the extra man, Bolzano tries to put Starkbaum’s cage under siege, finding the goal after some unsuccessful attempts thanks to a shot by Trivellato that ends up in the net thanks to the decisive close detour of Insam that totally puts Starkbaum out of action . The Viennese try to react immediately, but the Foxes keep the center of gravity high and dirty several dichi in the neutral zone, coming close to doubling with Bernard’s pole, with Halmo unable to bag the rebound; the Capitals goalkeeper then foils a shot from distance from Parini. He shows no sign of easing the red and white pressure, with Lowe trying to surprise Starkbaum with a shot from distance, but the Capitals goalkeeper manages to deflect. Shortly after comes the penalty against the foxes, with Frank being sent to the penalty bench for crosscheck; the hosts pitched their tents in the red and white defensive third, but without succeeding in their intent, but Lowe commits another foul and condemns his team to play 5 on 3 for about thirty seconds. In double numerical superiority, Vienna becomes even more dangerous, but the Foxes manage to resist thanks to some decisive saves by Boyle and recover Frank on the ice. Although still in inferiority, Bolzano allows themselves the luxury of starting on the counterattack with Frank and also manages to earn an attacking engagement and then they return to jouster in 5 against 5. Vienna tries to keep their center of gravity high, Bradley tries the conclusion which Wall tries to deflect but fails to catch Boyle blocking the puck. Capital pressure remains high, but the Foxes try to respond blow by blow, trying to restart in transition; the game remains masculine, even if at times it is played on the edge of the foul. The referees whistle a wrong change from Bolzano, with Vienna closing the first fraction in numerical superiority, but going to rest under a goal. 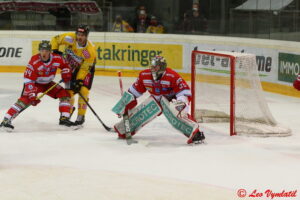 The second fraction begins with Bolzano that must “kill” 1:17 of residual numerical inferiority, but the PK of the Foxes resist with tooth and nail the attempts of the hosts who slightly lacked in aim and allowed the return on the ice by Miceli who, shortly after, makes Starkbaum shiver with a back shot. In 5 5, Bolzano is against danger with a shot from Maione that enters the net, but the referees do not confirm the mark because Starkbaum’s was displaced; shortly after, Frank will also go in front of the opponent’s cage. Another penalty arrives against Bolzano, with Tauferer having to sit in the penalty bench; with the extra man, Vienna tries both with the conclusions from a distance and with the close attempts, but once again the Foxes special team manages to “kill” the penalty without too many problems. Bolzano begins to suffer the pressure of Vienna, but still manages to resist the bosses’ offensives who, thanks to a foul whistled against Catenacci, find themselves playing for the fifth time with the extra man. The Capitals immediately become dangerous with a diagonal from Wall that is rejected with the boot by Boyle, then the hosts devour a colossal opportunity with Plastino who saves with the door unguarded. Catenacci returns who does not control an inviting assist from Gazley and then Vienna fortunately manages to find the equalizer with Moncada carambulating the puck on Boyle’s leg and skate and then ending up on the net. The referees call another penalty against the Foxes for too many men on the ice, but the red and white PK raises the wall in front of Boyle who, however, manages to stop the rare discs that filter. It is back in 5 against 5 and Mizzi immediately tries to engage Starkbaum who rejects; after a Ciampini-Maione combination allows the latter to place a very inviting puck in front of an opponent’s cage that no teammate manages to touch in the pocoguar poconita network. At the second siren, 1 to 1 between Vienna and Bolzano.

The Bolzano immediately starts the attack at the beginning of the third fraction, becoming dangerous with Miceli, Catenacci and Ciampini within a few seconds, but Starkbaum still manages to save his own goal. When he manages to set the action well, Bolzano becomes very dangerous with Miceli, whose conclusion is however stopped by Starkbaum who advances and closes the mirror of the opponent’s door. The two teams face off openly, with Bolzano that seems to recoil slightly in front of the offensive gusts of the Gialloneri, but the Foxes still manage to become very dangerous with Maione and Gazley that put the shivers in the rearguard of the hosts. The referees whistle a penalty against the Capitelli, with Sheppard sent to the bench punished for holding; with the extra man, Bolzano struggled to find openings in the Viennese rearguard who had a fairly easy game in avoiding dangers at Starkbaum. The numerical parity lasts a few seconds, because the referees send Meyer to the penalty bench; Catenacci immediately engages the opposing goalkeeper who rejects, repeating himself immediately after on Gazley’s slap. The same number, white and red, hits the outside of the net shortly after, then Bolzano risks in transition and thus loses the opportunity to exploit the numerical superiority. We enter full garbage time with the two teams starting to show some signs of fatigue and the attacking initiatives seem to be efficient; Hartl tries diagonally with less than a minute to go, but finds Boyle’s save. The third siren sees the two teams still on the tie score and the game thus slips to overtime. 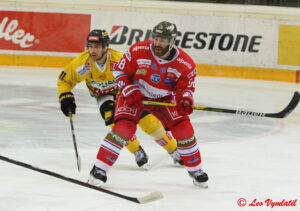 Over time, Gazley immediately touches the net with a shot that ends slightly high; shortly after it is Halmo who worries Starkbaum after a good stubborn action. Vienna becomes dangerous thanks to a “hole” in the red and white defense, then gains a numerical superiority thanks to the foul committed by Bernard; the Capitelli besiege the red and white cage with the Foxes who are unable to free the area but manage to resist and, just 4 seconds from the siren, finds the winning goal thanks to a diagonal by Bernard that surprises a badly placed Starkbaum who is surprised from the conclusion of the red and white captain.

Bolzano thus celebrates an important victory for the classification that sees the troops of coach Greg Ireland return to the provisional second place and thus prepare the best for Sunday’s match that will see the red and white challenge the ice of Szekesfehervar’s Gabor Ocskay Jr.

“Marconi was also awarded this way, it’s an honor”