Russia at the ATP Cup – 2022: Daniil Medvedev and Roman Safiullin beat the Italian national team and made it to the semifinals

The Russian national team snatched the hardest victory from the Italian team at the ATP Cup and made it to the semifinals. Our guys are just handsome! Daniil Medvedev became the best player of the tournament in history, and Roman Safiullin is our new secret weapon.

Medvedev has repaired the serve and is crushing the opponents again! Russia became the leader of the group at the ATP Cup

The Russian national team has approached the final round of the group stage of the ATP Cup – 2022 as the sole leader. Thanks to the efforts of Daniil Medvedev and Roman Safiullin, our team was able to beat strong teams from France and Australia. Moreover, the debutant of the Russian national team, Safiullin, won all his fights in general – two singles and two doubles. But although Medvedev made a misfire at the start in a meeting with the Frenchman Hugo Humbert, then he only won. Recall that due to positive tests for coronavirus, Andrei Rublev, Aslan Karatsev and Yevgeny Donskoy did not come to Sydney. So Daniil and Roman have nowhere to wait for help. 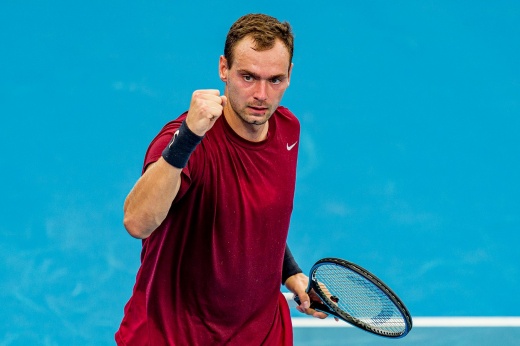 In general, according to the semifinalist of Roland Garros in 1989 and the winner of two tournaments in the Masters series, Andrey Chesnokov, the ATP Cup is a very successful competition in order to enter the season: “It’s good that the ATP Cup exists. At this tournament, you can always look at your strengths and capabilities, you don’t have to be afraid of losing. For Medvedev, this is a great opportunity to look at his condition, assess his strength before the Australian Open. I saw how Danya works in the preseason. He is doing a tremendous job. When you play the first matches after such preparation, you do not have enough playing feelings, the muscles are wooden. In general, it’s okay that Medvedev lost the first match. But he played a quality game against de Minor. I did not expect Safiullin to win his two matches. Roman is great. Participation in the ATP Cup will give him some freedom to go to the tournament in the tournament ”.

The final match of the Russians in the group stage of the Italian national team was a repetition of last year’s final. But, as already mentioned, with a different composition of participants from the Russian team. However, the Italians also have an update in their ranks. One of the most promising players of the tour, Yannick Sinner, successfully entered the position of the second number of his team. And the leader was Matteo Berrettini. By the way, both Italians are now in the top 10. And after the removal of Rublev, it was the Italian national team that turned out to be the highest-rated team in the tournament.

The match Russia – Italy according to the regulations started the second numbers of the teams. Yannick Sinner and Roman Safiullin have never met in the professional tour before, and it is worth noting the huge difference in the ratings among the players. Roman is now 167th, and Yannick is 10th. The Italian started the match quite cheerfully: he took the lead with a break – 2: 0. But Safiullin immediately “switched on”, leveled the situation – 2: 2, then reached the triple break point, but did not hit the opponent – 3: 3. In an absolutely equal fight it came to a tie-break, where the Russian did not use a double set point, but the opponent did not flinch at the most crucial moment – 7: 6 (8: 6). In the second game, the Russian had the opportunity to turn the tide of the match, but he never used one of the six break points. But Sinner had enough one break to formalize the victory in two sets – 7: 6, 6: 3 in two hours of struggle.

After that, the Russians no longer had the right to make a mistake. The first numbers of the teams entered the court – Daniil Medvedev and Matteo Berrettini. Previously, they met twice, and our tennis player won both times – in Indian Wells-2018 and just in the final of the ATP Cup – 2021. The fight turned out to be very difficult, although, of course, Medvedev, most likely, has not yet gained his best form. Perhaps the Russian is worried about minor injuries, in any case, this is not the first match in the tournament, Daniil spends with a warming tape on the abdominal muscle. The first set was dictated by the Russian. In the second tennis player, he made several wrong decisions. Well, in the third game, Medvedev achieved success – 6: 2, 6: 7, 6: 4 in 2 hours 38 minutes.

The fate of the match Russia – Italy and tickets to the semifinals were decided in a pair combination. It was played by the same players – Medvedev / Safiullin and Berrettini / Sinner. The match turned out to be incendiary and interesting. The Russians took the lead with a break – 4: 3, but immediately lost the advantage, and in the end they again gave up their serve – 5: 7. In the second game, Daniel and Roman were again the first to take someone else’s serve – 2: 1, but this time they kept the advantage – 6: 4. The fate of the fight, the match and the entire ticket to the semifinals was decided at the championship tie-break, where our tennis players could not be stopped – 5: 7, 6: 4, [10:5]…

This is how our tennis players won a strong-willed victory, made their way on Saturday, January 8, met with a team from a quartet C (Germany, Canada and the USA). In addition, Daniil Medvedev has established himself as the best player in the history of the tournament. During the drawing, he won 10 matches alone, and taking into account three combinations of combinations – 14. His closest pursuers won 11 victories each – Novak Djokovic and Pablo Carreno-Busta.

ATP Cup leaders in terms of the number of victories:

The most important thing is that our guys played with fire, enthusiasm, and a good mood. It was evident that they enjoy their actions on the court. In general, Medvedev has tried several types of triumph celebrations. The audience especially liked his waves with his hands.

Well, one cannot fail to note just an incredible, unthinkable blow in a doubles match past the pillar. How he was able to get the ball and put it between the net and the ball is unclear!

‹ Does BVB mix with Randal Kolo Muani? – Frankfurt in the role of favorites › Romantic night in an igloo, fondue in the Älplerstube