Petrovice: They used to be a seabed, today they are the smallest part of Prague

Incomplete two square kilometers Petrovice is the smallest part of the city in the capital. Today, more than 6,000 people live here, although – if the time machine could take us to a time that human memory cannot even remember, we would find ourselves in those weeks of Petrovice where we probably would not have expected it. Under water!

At the bottom of the sea

“The rolling landscape around Petrovice has been three times in its existence seabed, “Well Petr Říha in the book Petrovice – 770 years: History, present and future of the Prague – Petrovice district. This happened during the Paleozoic, Paleozoic and Mesozoic, before the continents were divided. The water from Petrovice did not quite disappear even after millions of years.

Their territory partly includes the Hostivař dam, where the remains of that “seabed” can still be found today. They are slate slopes along the dam. “It is a proof that about 490-500 million years ago, sandy mud settled here at the bottom of the sea. And it is their strengthening that created these sandy shales, “says Říha. In the Kozinec hill, quartzites were formed, which are even older.

The water was replaced by forests

It is not entirely clear when Petrovice can be spoken of as a village with permanent settlement for the first time. the written document dates back to 1352, Říha believes that the age of Petrovice is at least a hundred years older – they could have been founded in the years 1230 to 1250. However, it is certain that the first human steps were taken even before the script was created – The surroundings of Petrovice have been inhabited since prehistoric times, especially the Kozinec hill near the Hostivař fort.

“The area in which Petrovice lies was until almost the end of the first millennium covered by impenetrable forests,” says Říha. “The reason was most likely that this area was located in the buffer zone of the Přemyslids and Slavník family, who controlled a large part of Central, Eastern and Southeastern Bohemia until almost the end of the 10th century. Neither of the two rival parties was apparently interested in building any larger settlements in the area. ” hornbeam AND beech.

We are already at the beginning of Czech history, when princes from the family of the legendary Přemysl Oráč ruled over Prague and the de facto Czech principality. Their imaginary competitor of power was the Slavníkovci based in Libice nad Cidlinou east from Prague. It made an end behind the power struggle of both families murder Slavníkovců, which took place in 995. Even after the impenetrable forests, there are no more monuments in Petrovice today – all of them, even those in the vicinity, due to settlement. “She remains a rarity Milíčov Forest, which is a locality that has never ceased to exist in the history of the forest and has remained so to this day. ”The Milíčov forest is located only a few hundred meters from Petrovice.

The existence of forests and trade routes then gave rise to two nearby villages, which can also be found on the maps of the metropolis today. These are Měcholupy. The naming of these villages is quite prosaic, because they were inhabited by paws, who robbed the buyers of “bellows and bags with goods and often cut them down in their lives., “Říha mentions that their forests were the forests on the site of Petrovice.

Thus, the so-called settlements were created. bivalves. “There were two villages in the area with that name. Over the centuries, their name changed first to Malé and Velké Měcholupy and later, when Malé became larger than Velké – to Horní and Dolní Měcholupy. “

It cannot be said that the water element would replace the water element in this way. Botič flows through Petrovice, which was already full of ponds in the Middle Ages. “Medieval records mention the local fishing guild and also capture many species of fish and crayfish delivered to the royal court and church dignitaries, “describes Říha.

We are not ahead of this at all, because as is well known, Bohemia became a kingdom for the first time in 1085, when Wroclaw II was crowned. At that time, however, it was still impossible to talk about any Petrovice, life was circulating here to a large extent. Important trade routes led here. “It was mainly the so-called Prague princely country road from Vyšehrad through Strašnice, which copied the river Botič and Petrovice she bypassed from the east, “says Říha, adding that the journey continued Pitkovic, Mnichovice and Benešov, finally to Linz, Austria. The trail had to be relatively wide, as “a large number of cattle, which ended up somewhere other than the Cattle Market, had to rush through it the most.”

He just played the currently mentioned Botič for the existence of Petrovice crucial role. As is well known, the people settled there, where they had suitable conditions for subsistence, and therefore for defense against potential enemies. Both conditions were perfectly met by watercourses on which ponds could form. “The oldest settlement was undoubtedly on the promontory above Botič in the place of today’s church and chateau,” says Říha. It is therefore a locality between today’s Novopetrovická, Edisonova, Bellova and Grammova streets.

If we can rely on topographical delineation, what about time? That, as has been said, is a nut. Petrice is first mentioned in documents only in 1352, which would make them younger than, for example, Dubeč Chodov and Záběhlice. However, the charter was not founding, nor was it mentioned in the Register of Papal Tithing. So it is a logical assumption that Petrovice is older, but how much?

It will help us with a more specific assumption archeology. “The stone building of St. Peter’s Church. According to the building’s historical analysis, Jakub Senior is dated after 1250, “says Říha. The reasons for building the church are obvious – settlement. “Given that the construction of the stone temple was certainly preceded by the construction of a fortress, residential houses and a wooden church, we can move the first settlement to at least the beginning of the 13th century. Since then, Petrovice as a settlement, later a village and a village, has gradually grown to in 1968 they became an integral part of Prague. 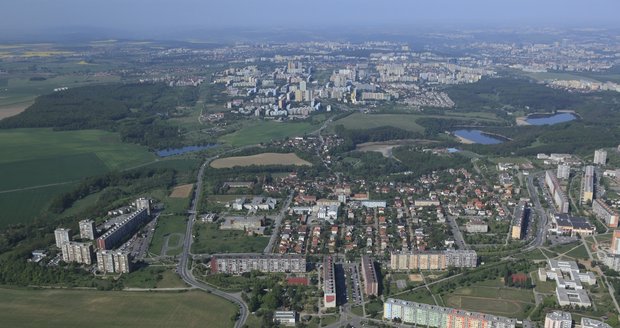 Aerial view of the Prague-Petrovice district, which is located in the east of the capital.

Prague residents often do not declare their permanent residence, and the city loses billions as a result

‹ Albert of Monaco: his four children reunited for the first time in a photo › ++ Corona protests: “Lying press” slogans in front of the ZDF studio – escalation in several cities