New Year’s Eve in Prague: Thousands of people are celebrating the New Year, with hundreds of police officers on the streets

New Year’s Eve celebrations in Prague are still quiet, according to firefighters, police and paramedics. While in the afternoon in the historical center of Prague there were mostly families with children, in the night they were replaced mainly by foreigners. In addition to Czech, English and Russian sounded mainly on Wenceslas Square and Old Town Square. According to the city company Prague City Tourism (PCT), 60,000 visitors could reach the capital on New Year’s Eve, which is significantly less than before the pandemic. 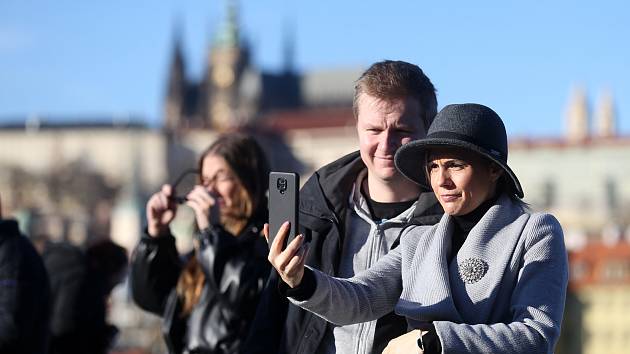 Prague Castle and Charles Bridge under siege by tourists, Old Town Square no longer attracted so much.

Nevertheless, the rescuers who set up a large tent on Wenceslas Square are ready. Hundreds of police officers oversee security and public order and anti-epidemic measures in Prague. During the New Year’s celebrations, ambulances of the Prague ambulance will be available to the public on Wenceslas Square and Old Town Square in addition to normal traffic. The transport company will extend the operation of the metro until two hours after midnight.

PICTURE: The windows and the facade were destroyed by an explosion years ago, today there is an unconventional gallery

Dozens of opponents of anti-coronavirus measures met in the Old Town Square in the afternoon. In Loretan Square, religious leaders again commemorated the victims of the pandemic. But by far the most were those who just walked through Prague Castle, Charles Bridge or the old town and Lesser Town streets. As midnight and the beginning of the new year approach, tens of thousands of people can be expected, especially around Wenceslas Square.

There is a ban on the use of pyrotechnics at the center, but this will discourage people from celebrating. There is no ban on alcohol consumption in public, nor is there a time limit for restaurants or bars.

Firefighters intervened until 11 p.m. in eleven fires due to pyrotechnics, which only affected bushes, rubbish or garbage cans. The Prague ambulance service at its center in Wenceslas Square helped, for example, men after falling from a scooter or women with allergies. The rescuers also dealt with one accident with fireworks, which did not happen in the center. This follows from the information on twitter of firefighters and rescuers. Prague police spokeswoman Violeta Siřišťová told ČTK that the police had so far dealt mainly with the use of pyrotechnics in places where it was forbidden, and they set out to be involved in pyrotechnics in Řeporyje.

Gastronomic establishments in Prague are relatively full. checks evidence of completed vaccinations or covid-19 disease in the last six months. There were often more than four people at the tables, which is currently the allowable limit if they are not members of the same household. However, many of them did not meet the condition, and the restorers mostly did not find out. Due to the favorable weather and the high temperatures in December, there is much more intensive efforts in Prague’s streets by the Minister of Health Vlastimil Válka (TOP 09) to prevent people from developing unnecessary contacts due to the continuing spread of the coronavirus disease.

It has been banned from using pyrotechnics in Prague since last year. These include the monument reserve, nature parks and protected areas, the surroundings of watercourses and islands, dams and dikes. The ban also applies in the vicinity of the Troja Zoo and homes for the elderly and other residential social facilities. The company for animals has prepared a form for firing fireworks. It can be used to fill in the place and time, including people’s batting on New Year’s Eve, and to state, for example, animal reactions, human and animal health problems due to pyrotechnics and whether the police were called and how they intervened.

This year’s New Year’s Eve is the warmest since 1935. They measured a record 15 degrees

Compared to previous years, the welcome of the new year on January 1, 2022 in Prague will be complete without fireworks organized by the city or projection on buildings, so-called videomapping. Due to the covidu-19 pandemic, the municipality decided not to hold the event. The welcoming of the new year did not take place even a year ago. Last year, Prague firefighters intervened in 18 fires related to fireworks.