Man in Havelock: In 1899, a thief terrified Prague

“In January and February 1899, there were several very bold thefts in Prague, mainly in the rooms of inns and cafes. The perpetrator, a young man of about seventeen, dressed in a havelok and a green hunting hat with a feather, he usually locked himself in a house where there was an inn or a café for the night, and hid there. He waited until one or two hours after midnight for everything in the house to die down, then crept down, slammed the door or window, entered the room, and stole what he could. He mainly looked at the drawers in which he sensed cash“” Read the indictment, which was read before the Prague court in 1899 and which is quoted by Dan Hrubý in the book Prague Murders.

A thief with a feather behind his hat

According to the defendant’s letter, it is clear that the described thief was really rude, which for a long time also bore fruit. In addition, he was almost a boy, according to witnesses “from behind, he looked more like a child, and only a direct look in his eyes revealed that he was already fifteen years old“. However, his clothing, ie havelok – a long sleeveless coat with a wide collar, cape and hunting hat with a feather – became his hallmark. It might seem that a thief in such striking clothes would be easy prey for detectives, but the opposite was true, and so the “man in the havelock,” as the people of Prague began to call him, became literally for the detectives from the security department.

He robbed Slavia too

The first theft, which he was responsible for, took place on January 21, 1899 in the then Gürtler restaurant (at Václavské náměstí 784/26). Around eleven o’clock he hid in the house where the restaurant was and waited for the house to sleep. He entered the restaurant kitchen through an open window and stole 133 gold coins, 60 tailors, and a pocket knife from the drawer. Around three in the morning, when the local housekeeper opened the gate for one of the tenants, he slipped out onto the street.

His other robberies were similar, and the still famous Slavia café was not spared. The more robberies there were, the more detailed the description of the unknown robber, which at that time was already being talked about all over Prague, was available to the police. I therefore On March 1, Inspector Josef Lederer received word that the man matched the description he was holding at the Na Slovance wine bar in Na Poříčí Street. The inspector immediately went to the perpetrator, but unfortunately missed him. However, the trail was hot, so the inspector finally managed to find the young robber in the Variety (today’s Karlín Theater).

During the interrogation, Inspector Lederer found that it is a former waiter’s apprentice, Gustav Havránek, born on October 28, 1882 in Lenešice near Louny. He was only 16 years old when the police arrested him. Havránek was given 18 months “hard” for his thefts.

Influencer from the 19th century

However, 16-year-old Havránek, with his unconventional clothing, left a mark on the minds of Praguers. In the spring of 1899, they liked a new type of coat – havelok. “A man in a havelock will only need a thorough havelock now, because he is sitting in the shade, and people with a new spring are also thinking about new clothes. Buying a havelok until the robber was secured was a consideration. But perhaps that is why mysterious romance attracted so many people to deliberately design such a dress. It is also said that such a havelok is actually an extremely cheap garment. And in a spring of 1899, the national image magazine Besedy lidu wrote a seasonal suit out of defiance and the desire to find out what was going on. 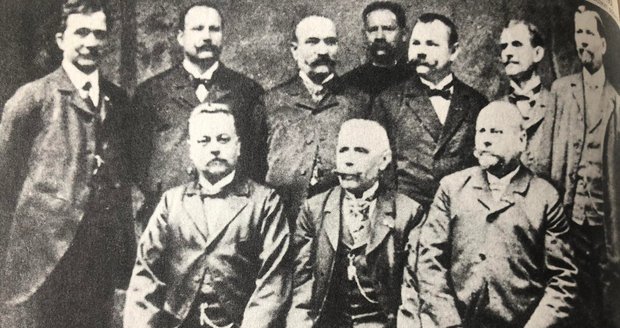 Police officers from the Security Department. Inspector Lederer is sitting in the middle.

The view of Prague from the church tower is great, it brings a physical and internal view, says the bell tower and Prague chief planner Ondřej Boháč

‹ He couldn’t resist a good job, but only for fabulous money. The traditional storytelling with the Vltava became fatal to him. Secrets of celebrities › Toulouse. Madame Sans Gêne moves to Saint-Cyprien