/ PHOTO GALLERY / Department store U Nováků in Vodičkova street no. 28 has a rich history. In almost 120 years of its existence, it became the home of several well-known theaters, the nearby brewery had to give way to it, and the unexpected collapse of the neighboring house only benefited him. 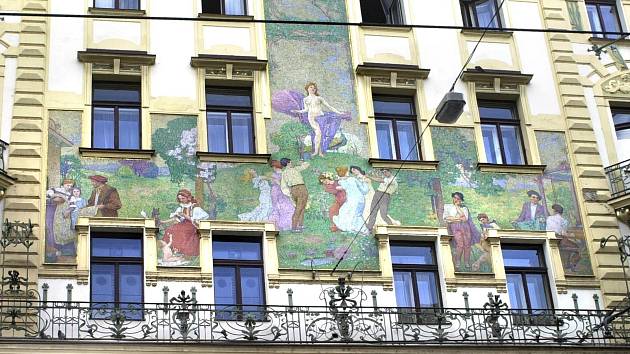 At the time, the highly modern Art Nouveau house stands on the site of the famous butcher of Mr. Vodička, to whom the whole street was named. It was established between 1901 and 1904 under the baton of the architect Osvalda Polívka, who is also responsible for the construction of the Municipal House. He was modeled on luxury department stores in Paris and Milan. But it is not just an ordinary building, its large winding corridors are more like a labyrinth.

The trade disaster has benefited

It’s actually a coincidence. The building, which was connected to the department store in V Jámě Street, unexpectedly collapsed to the ground at the end of the 1920s and U Nováků could expand. So now it has two entrances, from Vodičkovy and V Jámě streets. The older part of the house was built to order by Josef Novák, a businessman with textiles and tailoring services.

Breweries have seen a new trend. Traditional pubs have been replaced by garages and clubs

But it was not just Novák’s tailor’s salon and fabric shop that were located here. You would also find offices, warehouses, passages with shops, a games room, exhibition halls, a sports hall and even the cabaret hall and the U Nováků Theater, which could accommodate up to 700 people. To attract customers, he spared the owner nothing and money at all. A great attraction was the fountain and aquarium in the hall, and for the very first time they had the opportunity to refresh themselves during shopping in some predecessor of today’s “food courts”.

U Nováků thus became one of the first truly multifunctional department stores in Prague. The local passage is the oldest in Prague right after Lucerna. And another “technician” could boast of another technology: an elevator called a paternoster. At first, however, the owner had to deal with a curious problem. The customers were repelled by the smell from the neighboring bar and the U Štajgrů brewery. Thanks to his persistent efforts, the brewery was closed down, its main part demolished and the wings attached to the department store.

The house is also inextricably linked with theaters, of which several were located here. In the 1930s, an ensemble led by Jan Werich, Jiří Voskovec and Jaroslav Ježek, who went down in history as the Liberated Theater, moved here from the Na Slupi Theater. At present, the U Nováků passage is the home of the ABC theater.