Will Czech Television start after Stanjur in the pursuit of a sensation? Commentary by Štěpán Cháb

Description: His name is Stanjura, do you want him?

Do you remember last year’s farce with a ‘investigative’ report by Czech Television, which chased the Ministry of Finance Alena Schillerová around Prague and tried her out of English? A humorous nipple into our political swamp. Are you planning the same investigation into the new Minister Zbyněk Stanjur? He openly admits that he does not speak English and that he will hire an interpreter to the union.

“At least five new ministers will not be able to handle a professional conversation in English,” Hospodářské noviny reports. “We have a ministry that admitted to us that we do not speak English, but also a ministry that did not respond to our questions at all. Of course, we sent everyone, ” they wrote Economic newspaper.

For example, the Ministry of Labor and Social Affairs Marian Jurečka (KDU-ČSL) revealed that he did not have a certificate, but that he had once studied German and was now trying to catch up with English. According to the letter, this is quite a problem during the Czechia’s presidency of the EU, ie in the second half of 2022. And there is not so much a problem with Marian Jurečka, he can easily chop his motivational quotes about his love for his neighbor in Hindi, no one will even notice it. But what about the new Minister of Finance, who will hold talks with the finance ministers of other member states? There, in fact, we get to the field of another nemehla, which will pass to the Czech Republic with all the greatness. How many in a row?

“There is a real problem there, because on the one hand, Minister Stanjura has clearly told us that he will use an interpreter, that he will not speak well enough to lead the conversation, and that he will preside over the ministerial meeting and, let’s face it, that there will not be much power. with dignity, when he will have an interpreter at the presidential table, who will have to translate every sentence for him, “journalist Martin Ťopek pointed out, adding that behind-the-scenes meetings are essential. Interpreters are not allowed there. What will Stanjura do there? Embarrassed? The results of such actions will be cultivated just as embarrassingly. Nothing in favor of the Czech Republic. We send the dumb and deaf to sharp negotiations.

I said to myself – damn, being a minister is a responsibility, it definitely requires strength of personality, knowledge and skills. And the result? Let’s compare it with the normal work of a banker.

I peeked at Česká spořitelna. Position of a personal banker in Prague. Position requirements, I dare quote one sentence from the whole advertisement: … you can speak English. The responsibility of a personal banker? Compared to the Ministry of Finance ridiculous. Virtually zero. His is so adorned with various control mechanisms that he is unable to make his own decisions that would affect anything except the afternoon lunch breaks of the personal banker himself. 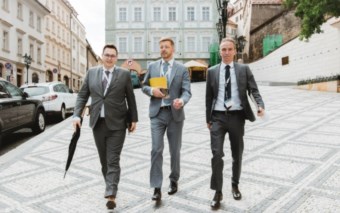 But the work of the minister. In addition, the Minister of Finance? The trade of the whole republic, its prosperity, its future. And because we are in the European Union, we need to be able to negotiate really hard with the Ministry of Finance of the other Member States and with the Union’s institutions. And Mr Stanjura will be severely silent. The pinnacle of his ability will be to have, following Schiller’s example, present a phonetic transcript of some useless speech, which he reads with horror and then turns backstage, but does not hide. A hilarious techno version of his speech will then be created on that account. See the techno version of President Miloš ‘Bubblebum’ Zeman’s speech.

And so it occurs to me – wouldn’t it be appropriate for the current government of the future to vote on the conditions for nominees for ministerial positions, where one of the items will be a compulsory knowledge of at least two world languages? It’s too? After all, it’s a minister’s chair, it’s not a foundry in the boiler room. Of course, expertise could be added to the conditions for the ministerial meeting. But with that, we would eventually come to the conclusion that Strakovka will in future be a very, very empty house for sale, not the seat of government. After all, we have a musicologist as Minister for European Affairs. Minister of Foreign Bachelors with no experience at all. Minister of Finance Amiga computer repairman with a bonus of ignorance of English.

‹ What Salzburg midwives achieve in times of the Corona › Lithuania has strict international recommendations on migrants: rejection must cease