PICTURE: The robotic competition was dominated by a team from Prague 2. The main role was played by robotic waiters

The thirteenth year of the Robosoutěž organized by the Faculty of Electrical Engineering of the Czech Technical University for high school and university students has had its finals. 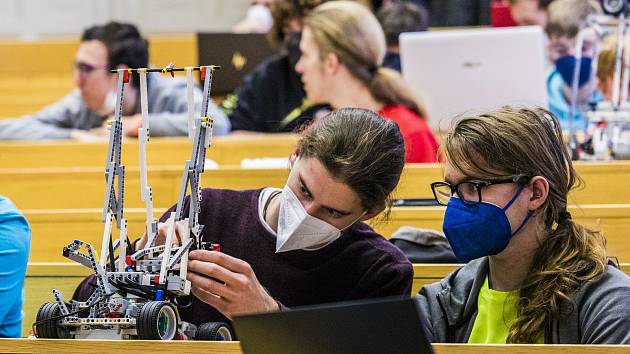 The thirteenth year of the Robosoutěž organized by ČVUT for high school and university students has had its finals.

The competition took a year off and is now back in full force. The individual rounds, of which a total of 106 teams took part in November, brought 32 advancers, three other teams received a wild card, and two university teams from FEE CTU also take part in the competition.

As in previous years, this year’s main goal was to fulfill the assigned task with the help of the LEGO Mindstorms kit. This time it was given the name ROBO waiter and the main role was played by balance – the robot had to autonomously cross a straight track with a variable slope, but without a guide line. he had to keep a wheelchair on his platform.

VIDEO: How do robots celebrate Christmas? CTU entertains with a holiday clip

The STV Team from the House of Children and Youth of Prague 2, consisting of Kryštof Kordík, Kryštof Holý and Richard Agulár, won the high school and university teams. Teams E4 and PIKOBOTI from SPŠ Ostrov took the second and third place.

The winner of the design evaluation category was then the Gymstr sixth Ó team representing the Strakonice grammar school.

“The competition teams surprised us because they managed to come up with a truly original design solution, but only the pendulum, which we considered when designing,” said competition organizer Martin Hlinovský from the Department of Control Engineering, FEE CTU.

Live: TK AVIA City – a new district in the north of Prague

‹ The modern folklore convoy Dijon Dijon Saturday March 26, 2022 › Nice and Monaco in the fight for a Cape Verdean nugget?