On the occasion of the 32nd final of the Coupe de France against Monaco, redstar.fr looks back on the striking confrontations between the two clubs

First episode today, with a focus on two great Audonian victories against the Monegasques, both at Bauer and with a score of 2-0.

Red Star and ASM, two legendary French football clubs have faced each other 15 times in 1952, with a perfectly balanced record since: six wins on each side, for three draws. The last confrontation between Monegasques and Audoniens dates back to the 18th Ligue 2 in 1976-77, a match that Monaco had won by a score of 2 but to 0.

During the 1965-1966 season, the two clubs still played in the first division. Counting for the 26th Championship day, this meeting takes place in a Bauer stadium which was full for the occasion, with more than 7,000 spectators present. Red lantern of the first division, the Red Star has only 13 points (victory at 2 points), with six units behind the 18th (jump-off), having won only three times during the first twenty-five days. For their part, the Monegasques point to an interesting 6th place in the ranking.

Even if the Red Star comes out of a decent performance with a draw obtained in Lyon (0-0) during the previous day, the Audoniens are hardly favorites before the reception of Monaco, having not won any meeting since the 12th day, more than three and a half months. In front of his audience, the Red Star must react to stop the current bad series.

In the first period, the two teams neutralize each other and fail to score, despite some hot situations on both sides, like this action by Theo, well repulsed by Dantheny, the Audonian goalkeeper. Shortly before the break, the Red Star striker Taillepierre was injured and was evacuated on a stretcher, before resuming his place in the second half. Despite a goalless draw, the Audoniens had a convincing first period, preparing more aggressive in the duels and enterprising in the game.

Back from the locker room, the Red will make the difference for the first time at 55th minute, with a realization of Manzano, who finally manages to deceive the vigilance of Casolari. Fifteen minutes later, the same Manzano will be at the start of a sharp action before serving Taillepierre, visibly well recovered from his injury, which will deceive the Monegasque goalkeeper a second time. Twenty minutes from the end of the match, the Audoniens lead thanks to a game turned towards the offensive, with a well-established and united collective. Above their opponents of the day in the engagement of the Audoniens will get several more situations facing a Monegasque team in difficulty in this second half.

At the final whistle, it was a huge relaxation in the ranks of the Red Star. The relaxation of finally having had a taste of victory again and of having ended with a long negative spiral.

More than a year and a half after their last confrontation, Audoniens and Monegasques found themselves on the field on August 27, 1967. After a season spent in the antechamber of the elite of French football during the 1966-67 season, the Red Star is back at the highest national level for the 1967-68 season after an incredible merger with Toulouse. During the first day, the Audoniens obtained a draw on the side of Metz (1-1), while the Asémistes lost at home against the Girondins de Bordeaux.

For the second day of the first division, Bauer finds the elite of French football, with a particularly interesting poster. The only downside on the Audonian side: coach Avellaneda will have to compose again without Lacaza, his titular left winger, still on the flank because of a sprain that occurred at the start of the match against Metz. 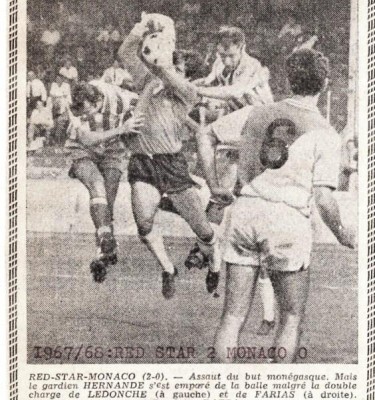 From the start of the meeting, the Audonians show self-sacrifice and solidarity to gain the upper hand. Shortly before the half hour mark, the Avellaneda players find the loophole through Ahache, who makes Bauer roar at the 24th minute of play. The Monegasque goalkeeper Hernandez will have a lot of work against the excited attackers of the Red Star, like Ledonche and Farias (see photo). The Audoniens return to the locker room with a logical advantage of a goal.

The second half got off to a perfect start for the Red Star, and José Ahache would once again defeat the Monaco defense, allowing the Red Star to take the lead on the scoreboard. In a full Bauer, the 9,000 spectators savor the spectacle offered by the Audoniens. At the end of the match, the Red Star will let the visitors continue the ball, without conceding any big chances. Thanks in particular to defensive solidity at all times, like Moy and Monin (see photo), who won numerous aerial duels with the opposing attackers. 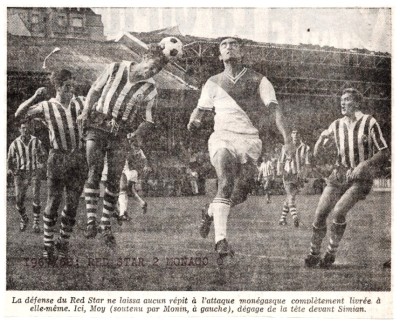 The Red Star held on and won another gala victory in front of their home crowd against the Monegasques. With this success, the Audoniens confirm their good start to the season and are in fifth position in the standings. The Red Star will complete the first phase at 6th place an excellent result for a promoted, before ending the season in the soft underbelly, easily ensuring his maintenance in the elite.

PSG unfolds with Mbappé, Monaco does not break

L1: PSG unfolds with Mbappé, Monaco does not break

Luis Campos is thinking of a Monaco player to strengthen his defense!