The Railway Administration won the architectural design for the new expressway terminal in January, specifically from the author duo Jiří Opočenský and Štěpán Valouch. It was the first architectural and urban competition at the expressway terminal in the Czech Republic. Now the administration was working with the architects to finalize the competition design. According to the reports, for example, the comments of local governments and also the proposals of the representatives of the French state railways SNCF, with which the Czech Railway Administration is cooperating for the preparation of expressways in the Czech Republic, were incorporated. Other reasons for modifications to the proposal were also the ongoing work on the documentation for the zoning decision of the section of the high-speed line Elbe, which is part of the terminal was to be.

In the processed study, nfor example, the new northern entrance to the interchange, which according to the administration should improve the accessibility of the pedestrian terminal from the village of Nehvizdy. There are also new footbridges to improve access to the platform from the car park. According to the administration, the terminal is also more spacious than in the original design, so that it has sufficient capacity for transport demand. Waiting rooms will also be set up on the platforms. The terminal will also include bicycle stands and lockable boxes and equipment for recharging electric bicycles. An electric charging station should then be available at every fifth parking space.

The planned terminal, so far with the working name Prague East, will serve mainly to the inhabitants of the north-eastern parts of the Central Bohemian Region and the surroundings of Prague. The station should allow them to use the high-speed rail without traveling to the city center. There will be regular rail transport to the center of Prague at the terminal, where the journey should take about 15 minutes, and also to other cities. Since the construction of the terminal, the administration also promises an impulse for the development of the surrounding area. However, the local government will be fully in charge of further development of the localities in its neighborhood.

The terminal will be part of the planned section from Prague Běchovice to Poříčany. This is one of the most developed projects in the preparation of the expressway in the Czech Republic, for which the administration has announced a contract for the processing of documentation for land management. The state is also preparing in the accelerated regime the sections Přerov (Prosenice) – Ostrava – Svinov on the backbone route between Prague, Brno and Ostrava, the section Brno (Modřice) – Vranovice on the route Brno – Vienna / Bratislava and also two sections between Prague and Dresden.

The construction of high-speed lines should significantly increase the capacity of the current railway network and also speed up connections on busy lines. Construction has been talked about in the Czech Republic since the 1990s, but preparations have only begun in recent years. 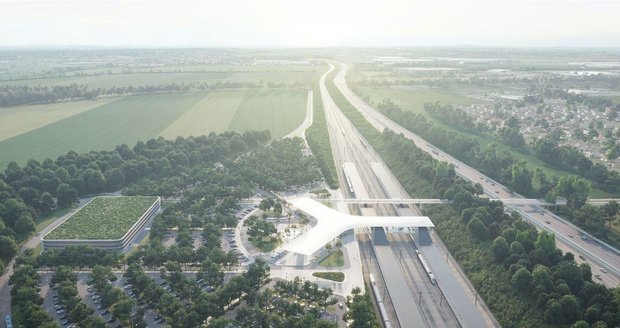 The first high-speed railway terminal will be built near Nehvizd. The situation will begin in 2025

MHMP: The capital is dealing with the hasty dismissal of the contact center in Prague 5

‹ Brussels focuses the bazooka on Big Tech › Not only the Majdans will spend Christmas outside Poland. Dowborów also rests under palm trees