Tram, appeal to the TAR against the San Marco variant

Appeal to the administrative court against the alternative variant to the historic center, it was presented by the municipal councilor Mario Razzanelli

FLORENCE – An appeal against the Variante al Centro Storico has been filed with the TAR of Tuscany, as announced by the city councilor Mario Razzanelli, former promoter of the Referendum on the tram line passing through Piazza Duomo. The appeal was signed by twenty citizens and by Mario Razzanelli.

The variant involves the passage of Line 3 of the tramway from Piazza della Libertà towards Via Cavour, up to Piazza San Marco and back on Viale Matteotti via Via Lamarmora. Instead of being supported by poles, the wires of the tramway will be anchored to the buildings of the two streets.

“I asked this administration to consult the Florentines who live along the route of Line 3.2.1 and the VACS to find out if they are in favor of this. Giorge’s answer was lapidary:” NO, we won the elections and since the tramway it was in our program we can build it. ”Today a consultation on the line would allow in a very short time to verify the willingness of the Florentines residing the route of the tramway.

Razzanelli added “Alternatively we have proposed to use 2 compasses to connect Piazza della Libertà not only with Piazza San Marco but also with Piazza del Duomo. We would avoid devastating this part of the historic center and save 40 million euros. Is this perhaps the problem? “.

The use of listing ten critical issues and in particular the decision not to subject the project to environmental impact assessment is contested. 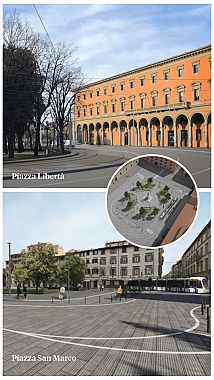 “The VIA should ensure that the number of passengers transported to the Municipality of Bagno a Ripoli has a positive impact on traffic. A difficult fact since two lanes are removed on the ring road between Piazza della Libertà and Piazza Beccaria, only two lanes remain along the Lungarno Colombo and a single lane on Viale Giannotti and Via Poggio Bracciolini. take the Florentine streets and clog them “concluded the councilor.

ALVINI, Cup route to get ready in Florence

JOVIC UNLOCKS, FLORENCE IS WAITING FOR HIS GOALS

IT HAPPENED TODAY 7 AUGUST 1420: WORKS FOR THE CONSTRUCTION OF THE MOST ORIGINAL DOME IN THE WORLD START IN FLORENCE: THE BRUNELLESCHI DOME

‹ Now Norway has something to avenge – VG › Alfred Haberpointner in the Salzburg Museum: mental work and physical effort