The Prime Minister does not see the fault of the ministers

The Prime Minister did not see the fault of the ministers and stated that they had assumed the “reputational damage” caused by the actions of the management of Lithuanian Railways.

She stated that she appreciated the readiness of G.Landsbergis and M.Skuodis to take responsibility, but could not agree with that.

“Not only because, as it turned out, the ministries had to act unaccompanied information, but also because the least dangerous way for the state to refuse cargo has yet to be marked, and resignations will not help to do so. Therefore, I will not submit requests for the resignation of the ministers to the President and I have persuaded the Minister to withdraw the requests tonight, “the Prime Minister said.

I. Šimonytė hopes that by the end of January at the latest, all “national solutions to the existing situations, ensuring the interests of the state national security and minimal financial risks” related to the termination of Belaruskalij transit will be presented.

“At the same time, proposals would be made at the EU level and further sectoral sanctions against the Belarusian regime and maximum synchronization with the US sanctions would be sought,” the Prime Minister stated.

The opposition raises many questions

Meanwhile, 50 representatives of the Seimas opposition on Tuesday registered a resolution of the Seimas proposing to form a Seimas temporary commission to investigate the transit of Belarusian fertilizers through Lithuania in 2021. in the fall.

Representatives of the opposition emphasize that the transit of Belaruskalij fertilizers through Lithuania with the message of AB Railway, the Ministry of Foreign Affairs and the Ministry of Transport continues and the US sanctions against this company do not enter into force, although the and to stop the transit of fertilizers from 2021. December 8

Members of the Seimas see reputational threats to the prestige of the state and the credibility of its foreign policy. The requirement for political responsibility and publicity is emphasized in the damage that may be caused to the state and the required transit of Belaruskalij fertilizers through Lithuania, which can determine the duties of high positions and their responsibility.

It is proposed that the Seimas form a Seimas temporary commission of inquiry of 13 parliamentarians and instruct it to carry out the circumstances of the transit of Belaruskalij fertilizers through Lithuania in the autumn of 2021. parliamentary inquiry.

Representatives of the opposition want the commission to determine which persons are responsible. The Commission should also determine the meeting of the Lithuanian Railways on 23.08.2021 and the meeting of the Head of the Lithuanian Railways, the Head of Law and Compliance and the Chief Financial Officer with the Deputy Minister of Foreign Affairs and the Head of the Sanctions Group on 30.08.2021. The current situation was briefed by the top ministers of the Ministry of Foreign Affairs and the Ministry of Transport and Communications.

The Commission should identify the decisions and decisions taken during the MoU meeting with OFAC investigators on 24.09.2021, as well as other cases of cooperation / consultation with OFAC.

The Commission should evaluate the meeting of the Board of Lithuanian Railways on 28 September 2021 and determine the decisions taken during it and the persons responsible for their control;

The Commission would assess the application of Lietuvos Geležinkeliai by letter to Belaruskalij regarding the transition to advance payments and the subsequent agreements, their initiation and the persons responsible for them, and the receipt of advance payments on a regular basis. It was also established whether and to what extent the ministers or the Prime Minister of the Ministry of Foreign Affairs and / or the MoU had been informed of the advance payments received. 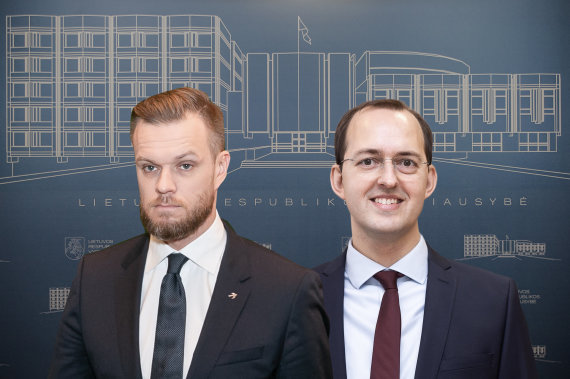 The Commission should also determine under which Lithuanian railways received an official commercial offer on 8 November 2021 for the payment service of one payment platform, Belaruskalij, after 8 December. and to assess the extent to which the Minister of Foreign Affairs and the Ministry of Foreign Affairs and their political team were aware of the proposal; what decisions or assessments the ministers and their political team submitted to the management of Lietuvos Geležinkeliai.

The Commission should also determine whether the government, in the presence of Prime Minister Šimonyte and / or the Chancellor of the Government, discussed the transit of Belaruskalij fertilizers during the US sanctions and / or related advance payments, and, if so, what decisions were made on transit and and / or in respect of advance payments.

it is proposed that this parliamentary question be carried out and that conclusions be presented by 2022. March 31

The resolution is proposed by 50 representatives of the Seimas opposition from the Regions, the Social Democrats, the Lithuanian Peasants ‘and Greens’ Union, the Labor Party, and the Democrats on behalf of Lithuania.

China threatens Lithuanian business with new sanctions: what does this mean? | Business

The billion-euro question – when will foreign tourists return to Lithuania?

“Elektrum Lietuva” offers a competitive offer to users in the dark: a fixed price for 36 months

‹ On Friday 17 December Istanti Sonori returns to the Cantiere San Bernardo in Pisa › OMV Petrom expands the network for recharging electric cars in the Republic of Moldova and Serbia, which will be connected to Bulgaria and Romania through 100 stations by the end of 2022