the traffic controllers on strike in New Aquitaine, the Toulouse-Bordeaux route severely disrupted

STRIKE – The management of the SNCF announced, Sunday, December 12, a strike movement which will punctuate the day of this Monday. The strike mainly concerns the traffic controllers at Bordeaux station. Disruptions are thus to be expected on the Toulouse – Bordeaux line.

Users of the Toulouse – Bordeaux line will be patient this Monday morning. SNCF filed a strike notice valid from 8 a.m. on Monday morning, can we read on the Twitter account of the railway company. The movement concerned the whole of New Aquitaine and mainly train switchers at the station. The latter thus called for an end to work, in particular at Bordeaux station.

The management of the SNCF was then not in a position, last night, to predict disturbances and invite travelers to consult its website this Monday morning to check if their trains are announced, canceled or delayed.

Trains canceled between Toulouse and Bordeaux

Only seven trains will run between Toulouse and Bordeaux during the day of Monday according to the SNCF website. The latter offers alternative routes, or substitute buses depending on the case. 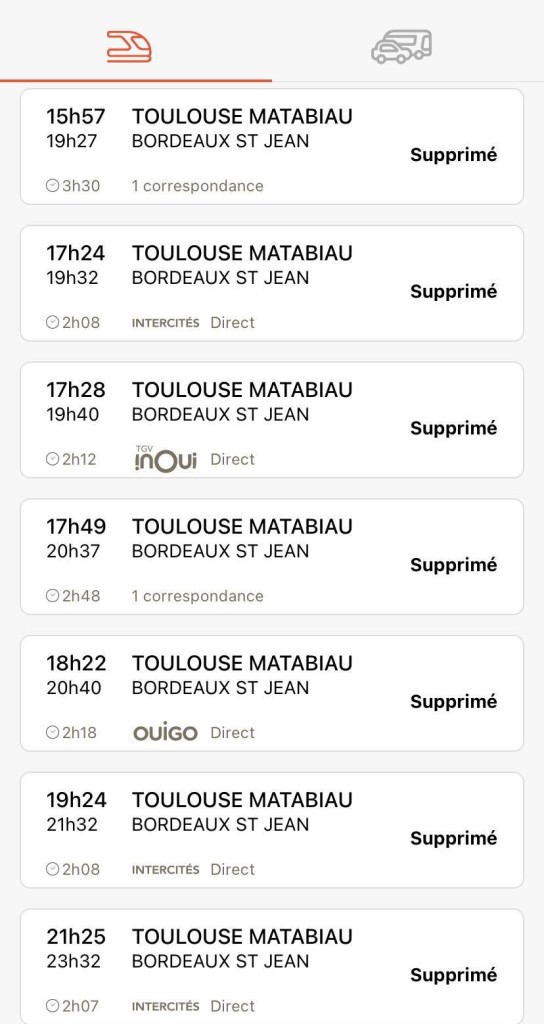 According to the SNCF reservation site, no train will run between Toulouse and Bordeaux from 3.30 p.m. In the direction Bordeaux Toulouse, the trains will stop their service from 6:28 pm. According to the railway company, traffic will resume normally on Tuesday morning.