In Martano opens the Lecce club named after Sticchi Damiani. “In Pisa with many fans”

LECCE – (tdg) The local section of the Lecce club named after Lecce president Saverio Sticchi Damiani has been inaugurated at Palazzo Corina in Martano. A crowd of people welcomed the Giallorossi number one, accompanied by his wife Marina. Also waiting for him are captains Lucioni, Barreca and Vincenzo Mazzeo, Lecce’s Under 16 coach. Also present was a representative of Lecce Women coached by Vera Indino. 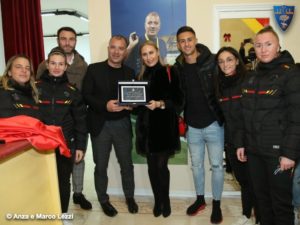 Applause and fireworks, and then more photos and autographs for the main architect of the club’s climb from Serie C, after six seasons, three years ago.

Sticchi Damiani cut the ribbon in the presence of the mayor of Martano Fabio Tarantino and the president of the club Fernando Stomeo.

Martano is the seventh club named after Sticchi Damiani. “The seventh born during our management – he said -, and this is already a source of great pride. It means that there is excitement, the desire to come together, to live this passion together. I thank the friends of Martano who have given me an incredible welcome. I didn’t expect it. Among other things, in such a beautifully organized venue and all the enthusiasm of the new generations. It’s beautiful. I always think where I started with my partners, how much we have done, is a company that people love. And the club has found the enthusiasm of the people “. 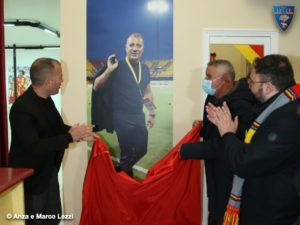 Sticchi Damiani also talks about Saturday’s match in Pisa. “It will not determine anything, it will be the highlight of the day, but the championship is still very long. We want to play well and hopefully with many fans in tow. We are doing everything in these hours to make it easier for them to travel. We need our people ”.

Legambiente ‘against’ piano recovery of the Curtatone and Montanara barracks