Inviting Amsterdam residents on a cycling section in Bordeaux is like putting a Bordeaux resident in front of a “pain au chocolat”. Fright is assured, at best. Logical, when we know that the Dutch capital “has 50 years of bicycle policy experience, and we have 20“as Isabelle Rami recognized on November 17. The elected metropolitan delegate for alternative mobility (EELV, Ecology and solidarity) then guided her Amsterdam acolytes for a bike ride in the streets of Bordeaux.”You are still at the very beginning“, remarked one of them. Or almost. Since after two volumes in 2011 and 2016, Bordeaux Métropole presents its third bicycle plan.

Bordeaux Métropole in the era of post-covid mobility

It is therefore Isabelle Rami who put it to the vote during the council of this Friday, November 26. With a stated objective: that the bicycle represents 18% of journeys in metropolitan Bordeaux by 2030, against barely 10% today. The use remains very unequal between the city center, where the modal share of cycling already stood at 15% in 2017, and the outskirts. To achieve this, the pillar project is based on the development of a cycle network of 14 routes, like tram lines, to mesh the territory over 270 kilometers.

“This express bike network [ndlr : ReVE] will be the construction of an independent network but which relies on already existing infrastructures. For example, there is a discontinuity on the Bordeaux-Parempuyre axis, which we are going to complete. We will have a network where the cyclist will have priority “, promises the elected to La Tribune.

The routes of the Express bicycle network devised by the Metropolis still need to be discussed with the municipalities. (Credits: Bordeaux Métropole)

GPSO: the alliance between the PS, the right and the center validates the LGV in Bordeaux Métropole

A metropolitan deployment that gives hope for a breath of fresh air in ever-increasing number of cyclo-workers and other bike-riders. Cyclist flows in the first quarter of the 2021-2022 school year are indeed particularly high, according to sensor data compiled by the Open Data Workshop. According to our calculations, bicycle traffic would have increased by 20% between the period April-June and September-November 2021. cohabitation between soft and motorized modes of transport.

To slide towards a more widespread and secure practice, the agglomeration encountered on the table 138 million euros for the first phase of the cycling plan from 2021 to 2023. A significant investment, supplemented by a provisional envelope of 150 million for the Network alone express bicycle which must be delivered in 2030. For its previous bicycle plan, the metropolis had invested up to 70 million euros between 2017 and 2020. Enough to give pledges to elected officials, until the dubbing of the old one. mobility delegate Brigitte Terraza (DVG, Socialists and related parties) who triggered “the strong ambition of the metropolis and the great will of the mayors to develop cycle networks.“

ZFE, 30 km / h, floating: what will change in Bordeaux in terms of mobility

The agglomeration will also need the support of the municipalities, since a majority of the financing of the cycling plan – i.e. 85 million euros over 2021-2023 – will be based on the Co-development contracts (Codev) and Fund of ‘municipal interest (FIC, dedicated to road works) discussed between the two communities. An orientation however questioned by the opposition metropolitan councilor Guillaume Garrigues (LR, Métropole Commune (s)). “This requires municipalities to withdraw other projects, especially since the FIC is quite limited and our municipalities are forced to make choices.“he opposed.

One sector in particular has been the subject of debates for several years around the sharing of public space: the Toulouse road, south of Bordeaux. And the project to establish a one-way traffic there, the experimentation of which is wanted by the mayor of Bordeaux, crystallizes the attentions a little more. “The one-way street is the only solution for setting up a real cycle path in view of the reduced width of the road “, considers William Boy. “But that would be to the detriment of the bus.”

The young architecture student, originally from Bordeaux, has been standing out on social networks for several months by proposing urban developments to integrate the bicycle into the road network. On the menu: two-way bicycles, pedestrian lanes or even Dutch roundabouts and crossroads – again them. Conceptualizations that even go so far as to seduce some elected officials because obviously, on paper, it is often exciting.

For an Express Bike Network! ??
Make the course of the Somme and the Toulouse road a major axis of this network to link the Place de la Victoire to Villenave d’Ornon! Here is the example of a Dutch crossroads Barrière de Toulouse. pic.twitter.com/hXGcAEhmen 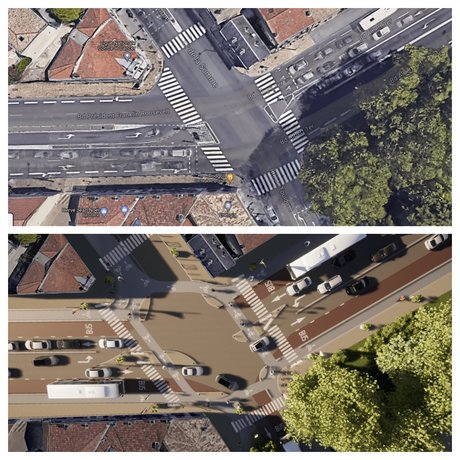 The proposed development of the Toulouse barrier with a Dutch crossroads. (Credit: William Boy)

After studying the documents for the new bicycle plan, the architecture student is cautious. So what is announced “a cycling network independent of the road network“, several portions of the ReVE appear to rely on bus lanes.”Line 1 resumes the route of the high-level service bus, which is currently under construction. It’s a bus lane, not a cycle lane“, argues William Boy. This is indeed the case on the intra-ring road part of this major line.

Nothing for the lessons, nor for the station

Moreover, the bicycle plan has not yet resolved the perilous equation of how to develop a cycle path on the boulevards. Line 13, known as the “boulevards”, could require the removal of at least one row of trees along the entire length of the route; an option not really on the program of a metropolis that would like plant its million plants by 2030. Another shortcoming: the difficult integration of cyclists on the courtyards of Bordeaux, these major arteries congested at peak hours, where cars, public transport and soft mobility rub shoulders, often in common lanes.

This aspect is however crucial since, as our analysis of the data from the bicycle sensors of Bordeaux metropolis reveals, one of the most frequented sectors is that of Cours Verdun, with 2,500 bikes per day on average. Or, if a portion of a two-way cycle path has recently been set up, there are currently no plans for the Réseau express Vélo to be deployed there. As for the course of the Marne, which rests the station in the hypercentre.

Number of bicycles passing each day on average in 2021

The stone bridge sees an average of 5,908 bicycles pass each day in both directions in 2021. This is the sensor that records the highest level of traffic in the metropolis. (Source: Bordeaux Métropole open data workshop)

It therefore seems difficult for the cycle network to be completely independent from the existing road network since the public space is, in fact, limited. The express bicycle network is, however, only the emerged part of other more specific developments that will emerge. And if the cyclists, always more numerous, being able one day to go to work by taking “the 14 then the 10“Like the Paris metro, they will still have to find their place among other forms of mobility.”There is still lots of trails to explore to compete with Copenhagen and Amsterdam and become the French cycling capital“, admits Fannie Le Boulanger (EELV, Écologie et solidarités) deputy mayor of Bordeaux. Dutch visitors in particular pointed to the recurring discontinuities of the cycling network as the main black point. To believe that the metropolis will not only have to pedal faster to get there. but pass well on the large plateau.

‹ For Belgians, the Saint-Nicolas lives in Spain and sails on a boat › REPORTING. At the Toulouse parcel sorting center, a crazy pace just before the holidays