Where to go public skating in Prague this year? Take a look at the overview of Prague ice rinks Other sports Sport | Pražská Drbna

December without winter sports would be like Christmas without a tree. We bring you an overview of Prague ice rinks under the open sky, where those interested can skate in Prague this year, whether they own their own skates or rent them on the spot. We know this from the ice rink on Letná, under the Žižkov tower or on Vypich. But where to go when these favorite areas are full? Here is our overview.

Prague 1: Skating in front of the Estates Theater and on Střelecký Island

The center of Prague offers skating as usual on Fruit market. The view of the Estates Theater in the immediate vicinity of the ice rinks brings with it an unmistakable atmosphere. This year, it will open at Mikuláš, ie on Sunday, December 5, and people can skate there from ten o’clock in the morning until nine in the evening until the end of January next year. Admission is free, for a fee the operators offer skate rental.

The rink, on the other hand, is a complete novelty on Shooting island, which has been open to the public since Thursday. It opens at two in the afternoon on weekdays and at ten o’clock on weekends, and up to nine people can skate there. Admission is free for children under 10 and citizens of Prague 1, others pay 50 crowns. Skates can be rented for a fee.

They have also been skating in Prague 1 since Friday, December 3 In František in Kozí Street. Admission ranges from 40 to 70 crowns and skate rental costs 50 crowns. The rink opens at a different time each day and the ice is undergoing half-hour landscaping, so we recommend checking the schedule before the trip.

In the summer of this year, Prague opened tentacle under the Hollar Gallery on the Smetana embankment. During the summer months, there was a cafe and a cultural program, now it is transformed into a skating rink. The ice surface here should be located directly at the level of the Vltava, which should evoke an atmosphere of skating on the river. The area will open on Monday, December 6 at four o’clock in the afternoon. Admission to the ice rink is free, and skates can be rented on site for a small fee.

Prague 2: Skating in the park or in front of the villa

The inhabitants of Prague 2 will have a short distance to two ice rinks this year. In addition to the traditional ice rink in Grébovka they can skate as well in Riegrovy sady.

In Grébovka or Havlíčkovy sady, the ice rink is located right next to Gröbe’s villa, in Riegrovy sady then next to the garden restaurant. For both ice rinks, the entrance fee is fifty crowns, in the morning the areas are accessible to schoolchildren and from two in the afternoon to eight o’clock in the evening for the public. They will be in operation until the end of February.

The ice rink in Riegerovy sady serves children from kindergartens and primary schools in the morning and the general public in the afternoon. Photo: Prague 2 district

The Žižkov ice rink is located directly below the TV tower in Mahler’s orchards. From the first of December to the end of February, it is possible not only to skate every day, but also to have drinks and snacks on the ice. The organizers are tempting for mulled wine and grilled specialties. Admission ranges from 100 to 120 crowns, you can rent skates for 50 crowns.

This year, those interested will skate in front of the shopping centers Arcade Pankrác AND Westfield Chodov.

Due to the great interest, the ice rink in Pankrác is larger this year, on 600 square meters they skate daily from nine to nine until the end of February. Skate rental costs 80, admission 60 crowns. In addition, children under the age of six have free entry.

The Chodov ice rink boasts an atypical shape – two smaller ice rinks are connected by bridges from the ice rink. A novelty this year is the ice bar, which offers refreshments to skaters right on the rink. Admission, as well as skate rental, ranges from 80 to 120 crowns. 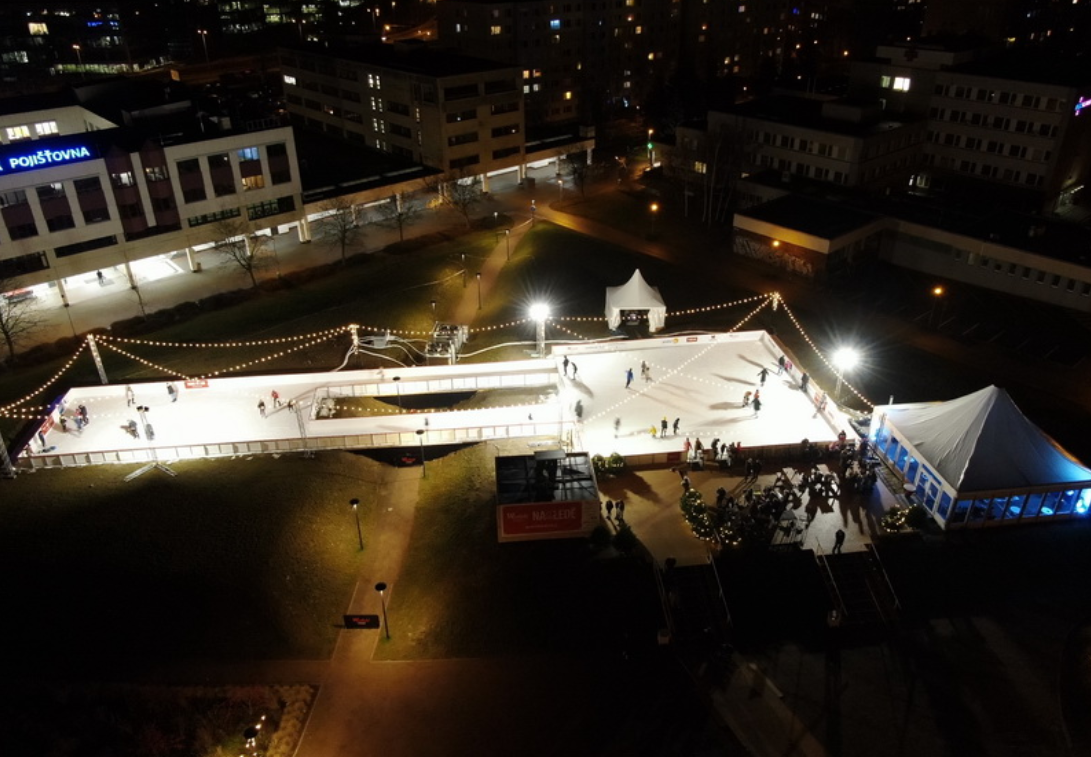 The ice rink in Chodov boasts an atypical shape or bar right next to the ice rink. Photo: Chodovnalede.cz

Prague 5: Skating rink behind the church and in front of the department store

Since the first of December, skating has been held in Prague 5 behind the Church of St. Wenceslas on the square on October 14. On Sunday, December 5, the grand opening will take place together with the St. Nicholas gift. Admission to the area is free, renting skates costs 80 to 120 crowns.

A novelty in Prague 5 is the ice rink at the Metropole Zličín shopping center. Skates from nine to nine are skated here daily and the entrance fee costs 50 to 100 crowns. It is also possible to rent skates for 80 to 120 crowns.

Prague 6: Skating in front of the Hvězda park

Prague 6 offers traditional skating on Vypich. The grand opening took place together with the lighting of the Christmas tree at the end of November and the area will be open until the end of February. Skate rental is available on site and admission is free. It is open every day from nine to nine.

Na Letné there are two ice rinks next to each other – one larger for adults and one smaller for children. Admission is free as every year and is open daily from nine to nine. The areas will be open until the end of February. A part of the complex is also a large heated tent, where skaters can comfortably change. Visitors can also have snacks or rent skates on site. The organizers also offer skating courses for children and adults. 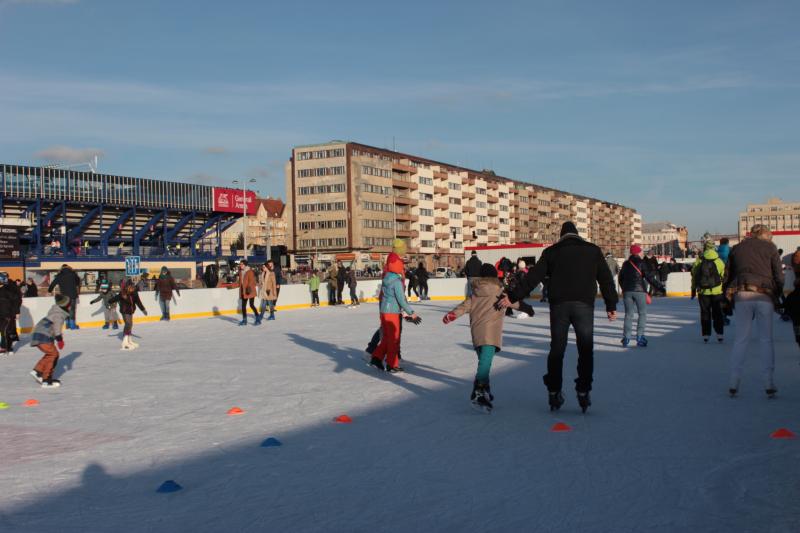 In Letná, skating is directly opposite the Sparta Stadium. Photo: Praguest.com

Prague 8: Skating with a drink in hand or ice rink at the swimming pool

This year, Prague 8 offers four ice rinks to those interested. The first is the rink at Glowacký Elementary Schoolwhich is especially suitable for families with small children who want to learn to skate. Admission ranges from 20 to 60 crowns, the rental shop also costs 60 crowns.

Skates are also on site swimming pool Ládvíwhich turned into a skater’s paradise for the winter. On weekends, skating here is from nine to seven o’clock since November, and it starts at one o’clock on weekdays. The uniform entrance fee is 49 crowns and you can rent skates for 80 crowns.

The ice rink is located this year as well at Löwit’s mill in Liben. Skating costs 40 to 60 crowns, skates can be rented for 80 crowns. It is open daily from nine to eight.

The last, special ice rink in Prague 8, is called River Rink and is located in the area River City in Karlin. Here, as in Chodov and Žižkov, you can have a snack right on the ice. In addition, various accompanying events take place here, such as figure skating performances or afternoon skating with DJs. Admission costs 80 to 120 crowns as well as skate rental.

Prague 9: Ice rink in front of the shopping center

In Prague 9, they skate on Černý Most, directly in front of the Černý Most shopping center. Admission costs a hundred, the operators also offer to rent skates or a kindergarten for the little ones. The desktop will run until the end of January. Candidates can skate every day in four blocks from nine to nine.

Skating rink on Černý Most. Photo: Černý Most Center

‹ New Year’s Eve in Prague is not moving, hotels are half empty. New government measures are to blame › Warsaw. Rubbish charges at risk? Housing cooperatives’ protest