The MiG-23 fighter is being transported from Prague to the museum in Kunovice.

Soviet-made supersonic aircraft to Kunovice will be lent by the state-owned company LOM Prague, on the company’s premises the machine has been standing in Prague’s Malešice for the last 19 years. The transport of the aircraft is part of the agreement on the loan of machines from the state enterprise LOM Prague to the museum in Kunovice. “TBy doing so, we are once again strengthening our cooperation with the Kunovice Aviation Museum, and I am very happy about that. Not only will this save another legendary machine of the Czechoslovak Air Force, but it will undoubtedly please many aviation enthusiasts of military aviation history, “said Jiří Protiva, Director of LOM Prague.

Before loading the plane with the crane, the mechanics removed the wings from the machine. However, the fuselage will carry the transport as a whole. The planned route leads through Polygrafická, Sazečská, Tiskařská and Průmyslová streets to the South Junction and through Spořilov and 5. května Street to the D1 motorway, which the convoy leaves at exit 210 near Holubice in the Vyškov region. From there, they will head to Kunovice via Slavkov u Brna and Chřiby.

According to Burkhard Jung, the director of the transport company, would have the entire route about 285 kilometers long handle in about four and a half hours. “If everything goes according to plan, we could be in Kunovice at half past five. However, the real time will depend on the traffic situation in Prague and also on the weather during transport,” said Jung.

The MiG-23 MF fuselage number 7184 will be the first aircraft in the Kunovice Museum, which belongs to the so-called third generation of fighters and at the same time the first changeable wing geometry. At the same time, it will represent the Žatec air base, where the machine served in the 11th Fighter Air Regiment. The MiG-23 aircraft was created at the turn of the 60s and 70s of the last century as a successor to the more famous MiG-21. however, both types were eventually produced in parallel.

In September 2016, the transport of the fuselage of the former government aircraft Tu-154 attracted a lot of public attention. He was transported by a tractor from the military airport in Prague’s Kbely to the Aviation Museum in Kunovice. The journey of more than 50 meters long and tens of tons of heavy set took three days. It was historically one of the largest aircraft transports in the Czech Republic. The convoy with wings and other parts of the machine, which is today one of the main attractions of the museum, arrived in Kunovice a few weeks later. 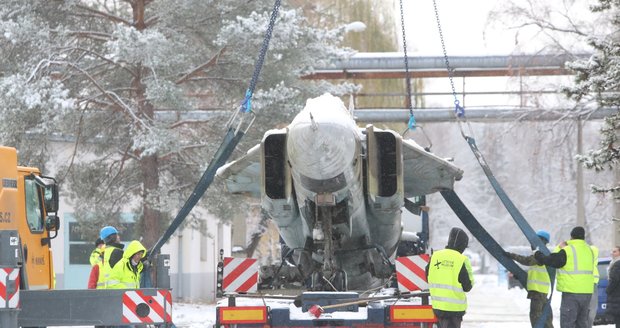