Lithuania lives like Sweden in 1990: explained why there was a crisis in the good life

Economists also sometimes talk about recovery and political aid and measures, but it is becoming clear that many Western countries are not recovering but are experiencing long-unseen economic prosperity and prosperity. There is a record increase in household income, savings and purchasing power, which is not being caught up in supply.

Manifestations of the crisis are already difficult to find

Commenting on the term “good life”, N. Mačiulis admitted that some such oxymoron of the crisis is coming out.

“The crisis is associated with something bad going on, mainly unemployment, declining incomes and more goods and services for us. At the moment, of course, politicians and economists are hinting that we are still in a pandemic crisis. But looking at the economic indicators, it is really very difficult to find those manifestations of the crisis.

Looking at Lithuania’s macroeconomic indicators, the unemployment rate has returned to pre-crisis levels and employment is much higher. There are many more people in work than there were before the pandemic. Wages have risen by a fifth since the start of the pandemic, not to mention the rise in real estate prices, the three billion increase in household deposits, the rise in corporate savings and deposits. ”

However, due to the economic importance, it was emphasized that flation was growing unless the annual growth of prices in Lithuania was almost 10%, and in most Western countries such inflation had not been seen for up to three decades.

“Where does inflation come from? We have a much-needed demand, such a strong desire to consume, to buy everyday consumption, investment goods, energy, which supply fails to catch up. There is also a lack of necessary components – semiconductors, raw materials, now there is a lack of energy resources.

There is not enough electricity, not enough gas and it all leads down to the prices of final consumer goods and services. The main reason for this is that most of them have a lot of money and a lot more desire to spend it, ”N. Mačiulis pointed out.

He explained why this might have happened. According to the economist, for the first time in history, central banks and the government worked in tandem in a highly coordinated manner in all countries of the world.

“The central bank is increasing the money supply, cutting interest rates, and the government is taking the money and distributing it. Higher social benefits, higher unemployment benefits, additional benefits for seniors and students. This was very obvious in Lithuania, but even more money was distributed in the USA.

It may look like that silver bullet. Why hasn’t anyone thought so far? If there is a problem, social, environmental or health related, we print the money and distribute it to the population. <...>. But the real income of the population has not fallen. The paradox is that the fears of politicians and economists were great in the beginning. “

According to N. Mačiulis, it soon became clear that the population had adapted. They traveled less, spent less money on vacations, restaurants, concerts, sports clubs, but still spent less.

“They started spending money on housing and furniture.”

This, he said, allowed economies to pick up very quickly before the pandemic. Sometimes in a quarter and sometimes in two quarters.

“Virtually all Western countries are living better than they were before the pandemic. But there were two factors here. One factor that residents did not want to stop their lives was the economic constraints on it all. You could spend money somewhere, at a restaurant, or on a trip, but you spent elsewhere.

<...> Clearly, this has helped sustain that economic activity, and the industry has been up and running. It is in an unprecedented state of prosperity. We see that, but it very quickly turned into a shortage of supply. They cannot supply and bring as many goods as consumers want in the West. “

He also added that it was not only consumers who did not lose revenue who contributed to this, but also central banks and governments who are still flooding with that money through a good channel.

“So, and it is very difficult when there are fewer consumers who want to work, the shortage of workers is at record highs. In both Lithuania and the United States, more than one in two companies say that a vacancy is prepared, there is a record salary, but there are no employees.

However, Professor R. Lazutka said that there are really other sides to life.

“Especially if we are talking about Lithuania, I will start to say that we have had such a golden age here for a decade. In fact, the average of those economies has been growing. I looked at the historical data, so now we can say that we live on average like Swedes. Our GDP per capita is roughly in line with 1990 levels. Sweden’s GDP per capita.

It was, in fact, a good time. Pandemics are a very short-lived thing and the consequences are not entirely clear when it comes to inflation. It can be a very heavy hangover, but in the long run, this is the way to integrate into the EU market and the costly market for our producers. Also additional EU support. “

On the other hand, the professor continued, that wealth is very unevenly distributed. According to him, when it comes to deposit records in banks, one should look at the distribution.

“As far as I can see, half of the population is only 10%. of total financial assets and, conversely, 10 percent. the richest have 50 percent. There are still studies that show whether people could pay unexpectedly. 42 percent. population in Lithuania answers that no. What do unexpected expenses mean? That is 430 euros.

This means that 42 percent. residents, if their teeth break or some household appliances break down, it is a problem to change it. There are, of course, great inequalities and big differences. In other areas, such as education, life expectancy varies greatly. It seems to me that the discussion should be just here, because if there is no crisis after the party, it is really necessary to pay attention to the distribution of all that wealth, ”R. Lazutka assured. 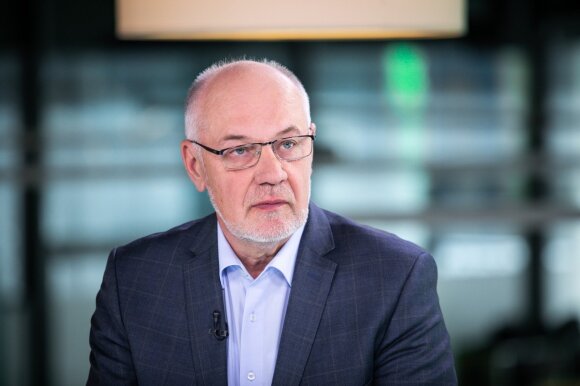 N. Mačiulis sadly joked that everyone lived equally well only in the Soviet Union, and there are greater inequalities in democratic capitalist states.

“In the Soviet Union, everyone is equally poor, and now there are differences for a variety of reasons. It is not the case that income inequality increases. For example, the monthly wage will increase faster than the minimum average wage from January. The population receiving the lowest pajamas has been catching up lately. Retirement pensions have lagged behind wage growth for a decade, and a large proportion of retirees’ income is now being indexed fairly quickly.

From next year, even for those who do not have enough seniority, the jump in pensions will be very significant. However, I agree that with a minimum wage, social benefits will not solve income inequality. “Increasing the NPD also helps to reduce the tax burden on those who, for example, earn less, have more of their purchasing power, and are more compensated for the burden of that inflation,” the economist explained.

According to him, in the long run, as the state is prospering now, the biggest problems need to be focused on as well.

“For example, education. Why do we go above 80% of GDP per capita? well above the EU average. According to individual expenditure, the population consumes, <...>, how much we keep 90 percent. EU average. We have surpassed not only all the neighboring countries, but also Spain and Portugal.

However, when it comes to healthy life expectancy, we are 10-15 years behind the EU average. When it comes to physical activity, there are twice as few physically active people as in the Scandinavian countries. When we look at the performance of students, we lag behind all the neighboring countries except Russia and Belarus. These indicators are expected to worsen the most and attract the most attention. ”

According to the economist, in the long run, income inequality arises in this area if a person has many chronic diseases, is ill, has no education and cannot change professions.

R. Lazutka clarified that the property inequality in Lithuania is not high and it is not, because the mass donation of apartments in “block” houses.

“If we compare the property of many people with residential housing, then in Lithuania that property inequality is not great. Inequality in income and opportunities is greater. What to do? First of all, we should stop thinking that if we talk about reducing inequality, we are going back to the Soviet Union.

He also warns that it is not important to control the income and income in order to avoid many social problems.

“It’s also the prevalence of crime and mental illness.”

Observes with horror what is being observed in Poland: I pray that Lithuania will not go astray

‹ Before the Hanover game: HSV trembles for Miro Muheim › Ukraine showed the best result in terms of shooting speed in the men’s world