Sunday 5 DecemberAlma Basket Patti receives at the PalaSerranò The PalaGiaccio Florence with the clear aim of achieving results despite the difference in the standings. The pattesi can aspire to something more with the arrivals of Allegra Botteghi (already gone in double digits at the debut) e Liliana Miccio, but as always happens the new grafts reveal the need to redesign new team balance.

The coach of the Alma Patti Mara Buzzanca

The coach knows it well Mara Buzzanca: “We are happy with the arrival of Botteghi and Miccio. They are two decisive grafts, but we must work to unite the group, raise the intensity and the level of attention, find the balance that will allow our team to perform at its best with this new conformation.“. The match against Florence is the most classic of the top-downs: the Tuscans are third in the standings, Patti is behind along with Battipaglia.

“They are a complete team, with important players, like Marta Rossini, among the best scorers of the South Group together with ours Marta Verona and this says a lot about how offensive Florence is. We will also have to pay attention to Reani, Scarpato And Of the oil“. Two-ball at 15:30, the referees Andrea Parisi from Catania and Lanfranco Rubera from Bagheria (PA) will direct the match. 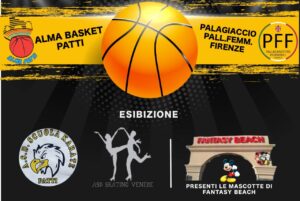 Many collateral events scheduled at the PalaSerranò in Patti

On the occasion of the match against Florence, the Alma will re-propose the events that attracted the public so much before the pandemic. During the warm-up, “Rebeal Heart” of the Feel Project by Sicilian DJs will be offered at PalaSerranò Eugenio Ferrara And Maurizio Lessi, piece broadcast during the warm-up of Inter-Napoli at the San Siro stadium on November 22nd.

Filippo Tripoli will instead organize “The Shows in the Entertainment”, an event wanted and supported by the president Attilio Scarcella, by the deputy Franco Buzzanca and by the team manager Mariana Kramer. The performance of the students of theAsd Karate of Patti of the Piccione brothers and ofLike Venus Skating di Piraino directed by Rosalinda Galipò. Also there will be the mascots of “Alaride” to ensure entertainment for the little ones. Alma Patti-Firenze will be broadcast live on the company’s official Facebook page, with the technical support of Davide Benedetto and Valeria Orlando and the commentary by Chiara Borzì.

A program for Florence 2022. A reflection on “Argomenti 2000” regarding the CEI conference at the end of February.

‹ The Iren Genova Quinto returns to party in Albaro: Posillipo beaten 8 to 5 › Which is the second largest Hungarian city? You will be surprised by the answer, a lot of people know the answer badly