Petersburg design bureau “Rubin” has designed a whole line of underwater unmanned systems of various classes. This was announced by the general director of the enterprise Igor Vilnit. The most famous brainchild of the design bureau, he called the autonomous super-deep-sea vehicle “Vityaz-D” – the world’s first robot, sank to the bottom of the Mariana Trench. Also “Rubin” is working on the complexes “Harpsichord”, “Juno”, “Amulet”, “Talisman”, other enterprises of the Russian Federation, the Sarma drone for navigating ships along the Northern Sea Route and the Poseidon nuclear drone for the Navy. According to experts, Russia is seeking to acquire wide underwater robots to perform defensive and research tasks.

Director General of JSC CDB MT Rubin (St. Petersburg) Igor Vilnit in an interview with the Krasnaya Zvezda newspaper about the company’s latest achievements in the field of underwater robotics.

The most famous brainchild of the design bureau of the Northern capital, he called the autonomous uninhabited underwater vehicle (AUV) “Vityaz-D”. It was the world’s first marine unmanned complex that dived in the sea of ​​the Mariana Trench with a depth of more than 10 thousand meters.

Znamen event took place on May 8, 2020. For immersion, Vityaz-D was launched from the Pacific Fleet rescue vessel Fotiy Krylov. At the bottom of the Mariana Trench, the Russian apparatus carried out mapping, photo and video filming, and also installed a pennant dedicated to the 75th anniversary of the victory in the Great Patriotic War.

“The most famous device is the deep-sea Vityaz-D, the world’s first unmanned aerial vehicle, which explored a part of the Mariana Trench, passing through a given amount. It was created by order of the Advanced Research Fund (FPI), ”Vilnit said.

Elite of the army and navy: the Russian marines are being improved and improved

On November 27, Russia celebrates the Day of the Marine Corps – one of the most combat-ready formations of the Russian army. For more than 300 years …

As reported in the materials of “Rubin”, the complex “Vityaz-D” for performing survey and search and research tasks “in the bottom layer and on the ground of the World Ocean in the entire range of depths, up to depths of 12 thousand meters.”

During the implementation of the project, specialists from Rubin and other leading domestic enterprises created new structural materials and implemented technical ones that ensure the immersion of the Vityaz-D components to the maximum depth and with minimal energy consumption.

The power bases of the AUV are made of titanium alloys, and its outer contours are made of spheroplastic, which compensates for the excess weight of the uninhabited vehicle and gives it a streamlined geometric shape. The movement of the device is four cruising power units and ten electric thrusters.

As the founder of the Military Russia portal Dmitry Kornev provides in an interview with RT, on the basis of technologies integrated into Vityaz-D, new robotic complexes (RTK) will be created for ultra-deep diving, both military and civilian.

“Vityaz has tested many technologies that have been announced on other underwater drones. “The most important thing, in my opinion, is that our engineers have such a strong body, capable of resisting the monstrous,” explained Kornev. 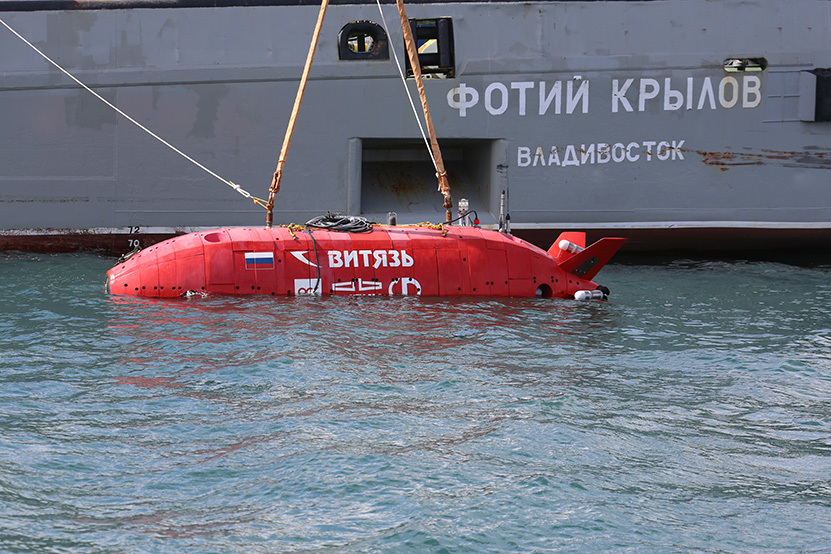 As the general director of “Rubin” is supposed, the further development of submarine RTKs will be associated with the expansion of functionality, cruising range, expansion of the volume and variety of information collected.

Vilnit also predicts the emergence of so-called “resident” robots. For a long time, these AUVs are a way to work in their definite state in conjunction with bottom stations, which provide the transfer of functions that facilitate the transmission of regular data and download the collected data from the vehicles.

“Rubin” is considered in Russia as a diversified design bureau of marine engineering. According to Vilnit, today the company is working on new projects of autonomous underwater vehicles for various purposes.

“The Harpsichord-type apparatus has been designed and built, the Surrogate target robot, the Juno light-class apparatus, the Amulet family of small robots, the Talisman remote-controlled unmanned underwater vehicle, as well as a number of other vehicles, including Including the heavy class, “- said the general director of Rubin. 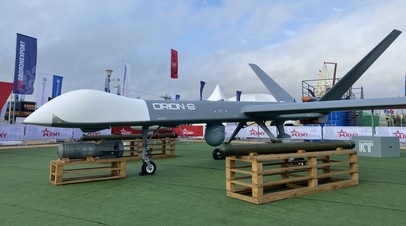 The most priority foreign market for the Orion reconnaissance and strike UAV will be the Middle East. About this declared …

“Harpsichord” is a type of AUV designed for surveying and mapping the seabed and sounding the ground. Externally similar to a torpedo, the apparatus can be placed on any ship of the Russian Navy.

Thus, the “Harpsichord-1R” complex is already in operation as part of the Pacific Fleet. The mass of this drone reaches 2.5 tons, the cruising range is up to 300 km, the autonomy of operation is 120 hours, and the working depth of immersion is up to 6 thousand meters.

The further development of this AUV is the “Harpsichord-2R-PM” complex (sometimes the name “Harpsichord-2R” in the media). It is assumed that it will be carried by special nuclear submarines of project 09852 BS-139 “Belgorod” and project 09787 BS-64 “Podmoskovye”.

The next drone in Rubin’s nomenclature is a 17-meter modular AUV with a Surrogate lithium-ion battery. The device is capable of imitating the actions of submarines, mapping the area and reconnaissance.

According to Rubin’s specialists, this RTK will be able to carry out missions for 15-16 hours and will replace real submarines in naval exercises, which will reduce the cost of maneuvers and risks for crews.

Another novelty of the St. Petersburg design bureau is the compact device of the light class “Juno”. Due to its weight and size characteristics from floating craft, from a pier or unequipped shore.

The class of small underwater RTKs in the Rubin line is represented by the Amulet vehicles. They are designed to carry out inspection, search queries in shallow water. 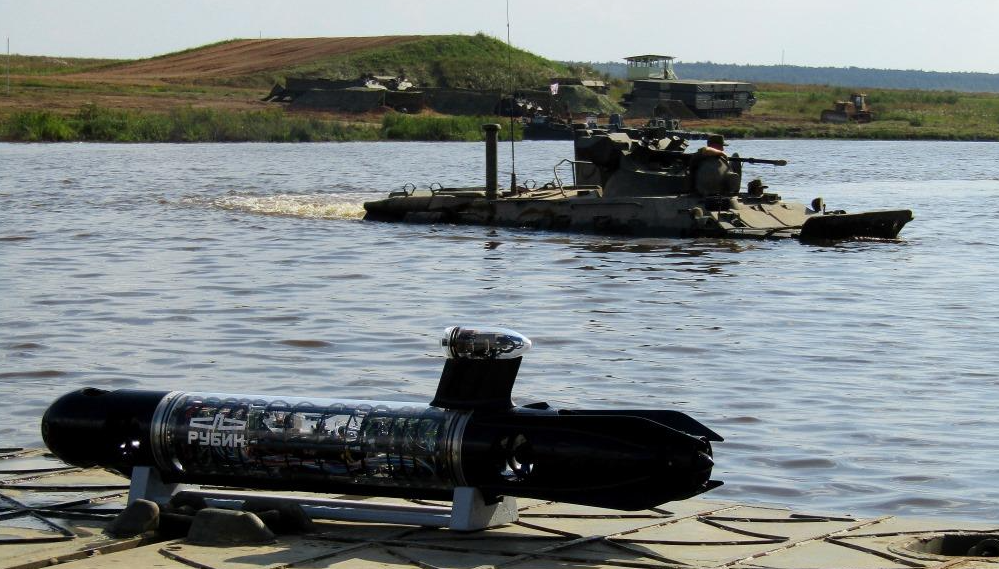 The most compact autonomous complex used by Rubin is Talisman, which can be operated without the use of special crane equipment and is highly maneuverable. 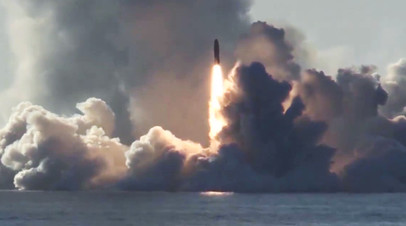 “Invulnerable to any missile defense systems”: how Bulava missiles enhance the nuclear component of the Russian nuclear triad

Along with the drones listed by Vilnit, the domestic industry is creating several other AUVs. One of them is the Sarma underwater drone. It is being developed by the Lazurit Central Design Bureau (Nizhny Novgorod) and the Almaz-Antey concern with the support of the FPI. A drone to ensure the safety of the passage of ships along the Northern Sea Route.

The peculiarity of the device is that it can operate without surfacing and communicating with satellites, focusing on its own data from the navigation system.

The pinnacle of development of autonomous underwater complexes is called the Poseidon nuclear drone, which caused great concern in the United States.

For the first time, Russian President Vladimir Putin Federa spoke about the capabilities of this apparatus in March 2018 in a message to the general meeting. As the head of state said.

According to Dmitry Kornev’s forecast, in the medium term, Russia will acquire a wide range of AUVs of various classes for civil and civilian needs. Underwater drones will greatly simplify and reduce the cost of work related to exploration, exploration of the seabed and currents, the search for dangerous sunken objects, including mines and disposal of toxic substances.

“Nowadays, for solving many problems, a marine underwater drone is much cheaper and more practical than a submarine or a bathyscaphe. AUV, depending on its characteristics, can be sent to almost any desired depth and range, without risking the lives of people. These developments are needed by the Navy, scientists, and mining corporations, ”the expert explained.

In the comments of RT, Dmitry Litovkin, editor of the Nezavisimoye Voennoye Obozreniye newspaper, expressed the opinion that the strategic goal of Moscow’s development in the area of ​​submarine RTKs is a kind of “colonization” of the seabed and space. The implementation of this task will have a positive effect on the defense, scientific and economic potential of the Russian Federation, the analyst is sure.

“For obvious reasons, the real technical capabilities of modern and promising Russian AUVs are unknown. – summed up Dmitry Litovkin.