After Znojmo’s blow, Bolzano suffered their second consecutive defeat and third in the last four games of the ICE Hockey League. At the PalaOnda in Via Galvani the Vienna Capitals win 1-2 at the end of a rather ugly match between two mediocre teams, with many mistakes on both sides, but at least there was a review of a Bolzano who tried to fight until the end, while making big mistakes in the finalization phase. 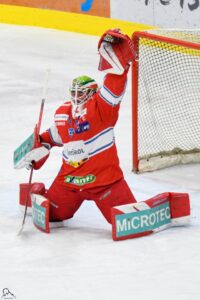 The Bolzano immediately tries to put pressure on the opposing defense that closes well in front of Kickert; Vienna tries to respond, but the defense forgets about Gazley who, thrown towards the opposing goalkeeper from a precise pass by Frank, presents himself in front of Kickert, unbalances him with a couple of feints and then bags into the net. The advantage is to give the Foxes wings, but he leans too far forward and holes in defense, does not take advantage of it, having the shot rejected by Fazio. It is the antiphon of the Viennese equalizer that arrives shortly after at the end of a 2 against 1 with Fazio rejecting a first conclusion, however granting a rebound on which Hartl arrives like a hawk to equalize. The Bolzano feels the blow, but immediately tries to get back in the lead with a shot from Bernard who, however, ends up prey to the opposing goalkeeper. The first penalty of the match is against the Foxes, with Findlay sent to the bench punished for hook with stick, but the first opportunity is for the red and white hosts, with Frank starting a nice counterattack and serving Halmo’s trailer, but Kickert manages to save himself, albeit with difficulty. He tries to make Vienna dangerous with a diagonal from Hartl, but Fazio manages to put the leg on the opponent’s diagonal and to reject; it is the only gasp of the guests during the numerical superiority. We return to play in 5 on 5 and Bolzano returns to put pressure on the opposing rearguard, but a lost puck in defense by Di Perna makes the fans present at Palaonda shiver, fortunately the Foxes defense manages to free. The Bolzano pushes and puts pressure on the opposing rearguard, but without being able to worry too much the visiting goalkeeper who, when called into question, responds present. There is also a penalty against Vienna, with Neal sent to the penalty box for late play. The first chance with the extra man for the Foxes comes from Maione’s bluliner, but Kickert is well placed and saves. Shortly after the red and white numerical superiority is canceled by the penalty whistled to Findlay. Vienna recovers the extra man and Fazio is immediately under siege, but is reactive to reject the close conclusion of Antal and also Bolzano returns with the 5 men on the ice. The first fraction ends with a counterattack by Bolzano, brought forward by Findlay who, however, prefers to serve the tow of a teammate at the conclusion. Team at the first rest on the tie score.

The start of the second fraction is more balanced and it is the guests who become dangerous in the fray, with Fazio anticipating Sutter by a whisker; Bolzano responds with Frank trying to serve a teammate

to Kickert but fails in front of filtering the disc. The Bolzano returns to grind discs and remains fairly continuously in the attacking zone, but the shots that come to worry Kickert are very rare. At the pressure of the red and white, Vienna reacts with lightening actions that do not, however, undermine the device prepared by coach Armani. Fazio is very good at opposing an opponent diagonal and then getting up immediately to avoid the tap-in. The team hosts raises the center of gravity and crushes the Foxes in the defensive zone, with Fazio foiling an evil touch from Antal. A tired phase goes through it, with the two teams making a lot of mistakes but ending little and not in a dangerous way as to create problems for the two goalkeepers. A charge, which appeared hard but substantially correct, by Lowe against Preiser gives life to a close clarification between the two who are both sent to the penalty; shortly after Halmo almost surprised Kickert, but the shot of the number 91 of the Foxes ended up against the mask of the opposing goalkeeper. The guests high the pressure the pressure, Mizzi then devours a good chance against Kickert, it is almost only Vienna, with the yellow and black guests who try to benefit the physical decline of the red and white who, however, touch the new advantage in the fray, but the Catenacci’s touch is deflected by Kickert just before crossing the goal line. Shortly after Miceli recovers and defends a nice puck behind the opponent’s cage and serves for Findlay in the slot, but Kickert manages to save himself in two halves. Suddenly Vienna found the advantage with a shot from Lakos that surprised Fazio and slipped into the net after kissing the post. The Bolzano immediately tries to react, but it turns out and risks suffering the third guest goal, but this time Fazio lies down on a bearskin and saves his cage. Guests benefit from a network at the sound of the second siren.

Guests immediately under pressure at the beginning of the third period, but it is Bolzano that touched the equalizer with Gazley who, unfortunately, found the opposition of Kickert after a good pass from Findlay; shortly after it is 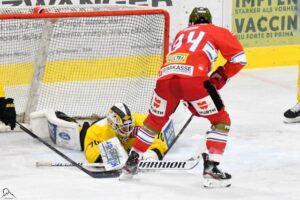 Halmo not to find the right time to beat the opposing goalkeeper already lying on the ice. Another tired phase of the match, with Bolzano trying to push, he almost reaches the end, but then always misses the last step. The game remains very physical, while the two teams begin to show signs of fatigue; then he tries Drilled by the blue, but the shot becomes a fairly easy prey for Kickert. The referees let go a lot, perhaps too much, then whistle a foul against Bauer; with the extra man Bolzano tries with a central percussion from Trivellato, but the shot of the red and white number 53 is too central to worry Kickert, then De Haas also tries, who finds the effective opposition of the opponent goalie. Just at the end of the numerical superiority a Trivellato torpedo that Kickert does not hold back but Vienna still manages to save itself due to the broken cap. The Foxes press to press, the Viennese defend well and try to sting on the counterattack. We enter garbage time with Bolzano who are still struggling and trying to recover the result and find themselves enjoying a numerical superiority for the penalty whistled against Bauer, but fails to make themselves dangerous. Coach Armani calls the time-out to give the latest information to his team, you can keep Fazio on the bench to field the extra striker, Vienna just misses the empty-net. The last desperate assaults of the Foxes do not produce appreciable effects and the game ends with the victory of the guests.

Now the Foxes, who will still be led by the Armani-Egger duo, will return to the ice on Sunday in the early afternoon to face the Graz 99ers, again at PalaOnda.

Austria: Vienna, greater health offer in the seven hospitals of religious orders. In one year 450 thousand patients were treated

Austria Vienna – Fenerbahce, the prediction: possible GOAL and teases the over 2.5

‹ Ligue 2 – 17th day: in Toulouse, the left is looking for its candidate › Ukraine offered its allies a broad package of measures to deter Russia