As more and more Belarusians apply for humanitarian visas or political asylum, Lithuanian intelligence has warned that the Belarusian KGB may try to recruit some refugees or infiltrate its agents among them.

According to the Department of Homeland Security, the aim is to gather information about Sviatlan Cichanouskaya, the leader of the Belarusian opposition currently living in Lithuania, and its environment, Belarusian public organizations and their members to identify possible violations and try to discredit and influence their actions, decisions and statements.

According to Lithuanian intelligence, provocative actions may also be aimed at inciting distrust and hostility among the Belarusian opposition who have taken refuge in the country.

Department of Homeland Security 15min confirmed that in April of this year Lithuania added Ilya Begun, who had arrived in Lithuania with a humanitarian visa obtained through a human rights organization, to the list of undesirable persons.

“An information technology specialist who introduced himself as a refugee since the crackdown on the regime in Vilnius has flocked to S. Cichanousko’s environment, supported by the Belarusian refugee organization Dapamoga, the Strana dlia žizni Foundation (SDŽ), and other exile activities. The person sought to get closer to them, among other things, by establishing romantic ties and friendships with their helpers and activists, ”the SSD commented, which was forwarded by the intelligence service in response to 15min issues.

At the beginning of the year, I.Begunas, possibly after completing the task, left Lithuania for Belarus with great haste, leaving even a part of his personal documents. Shortly afterwards, some Belarusian organizations operating in Vilnius reported the stolen data from their computers.

As soon as he arrived in Hungary, Becun took part in a show on the regime’s TV channel ONT, in which the exiled opposition was disturbed, saying the latter was acting against the state, and later joined the so-called “Democratic Forces Roundtable”.

When these circumstances became clear, one person from the Belarusian opposition environment benevolently revealed that he had provided certain information to I. Begun without bad intentions, part of which later appeared in the propaganda channels of the regime in order to compromise the opposition, informed Lithuanian intelligence.

According to Lithuanian intelligence, a similar operating scheme was not exclusive, attempts were made to apply it in several other cases.

15min journalists have collected data on one similar this summer.

Pasak 15min sources, a former Belarusian law enforcement officer Andrei Abramenka was still in Belarus with a request to help him be illegally brought to Lithuania and apply for asylum here.

He entered Lithuania illegally after crossing the border in Varėna district, later appeared with signs of beatings, until he finally disappeared from sight. A few days later, the person’s story about the smuggling of migrants across the border appeared on YouTube, and conversations with Lithuanian officials were secretly recorded. 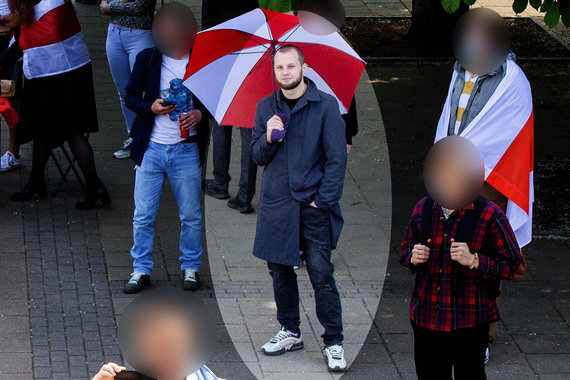 Lithuanian intelligence officers 15min confirmed on Thursday that the case is “part of the same picture”.

The SSD informed that for preventive purposes it monitors and evaluates some persons who have already arrived in Lithuania illegally or with humanitarian visas and is awaiting a decision on granting asylum.

“Intelligence warns Belarusian refugees who may be recruited by the Minsk regime not to engage in criminal activities in Lithuania, which would result in the imposition of established criminal sanctions.

Persons who have experienced the attention of the secret services of the Belarussian regime should be directed to contact them, they are encouraged to contact the SSD hotline by phone 8 700 70 007 and / or e-mail [email protected], ensuring the confidentiality of the applicants, ”the SSD commented.

Cichanouskaya, who participated in the presidential elections in Belarus, arrived in Lithuania in August, shortly after the vote, the results of which falsified in favor of dictator A. Lukashenko.

She has long held her husband, a video blogger, who was imprisoned by the regime before the election.

Cichanouskaya from Vilnius, who is coordinating the activities of the opposition, is seeking greater Western pressure on Lukashenko to hold fair elections in Belarus.