Currently, the area around Florence is a large brownnfield right in the middle of the city, located just a kilometer from Old Town Square! The whole area now has only transport use, the focal point of which is the bus station. But there is also a main road, a railway bridge, a metro and also a tram connection between the Old Town and Karlín. Transforming this area from a purely transport hub to a place that will be suitable for living, working and relaxing will now be a task for the team of winners.

“We have already worked on several city projects, but still we have never seen such positive feedback and a desire for change from the public, ”Says Filip Tittl, a member of the winning team from Unit Architekti. “The whole area has many obstacles, both visible, such as the highway or the railway bridge, and the hidden ones. The place has huge potential and I think it is one of the most important areas for the future development of the whole of Prague, “added Tiitl.

At first glance, it might seem that everything is solved and construction may begin soon. But the opposite is true. “The winner won us over for his urban solution with a reasonable scale and design of the connection between Těšnov and Žižkov with a new public space at the foot of Žižkov. Now in cooperation with landowners inis preparing a study to change the zoning plan, “Said Deputy Mayor for Regional Development Petr Hlaváček (United Forces).

“After the change of the zoning plan, an architectural studio will be sought, which will design the specific form of the individual buildings. MI think that the closest realization is the area around Na Florenci Street. But I can’t estimate the date, it depends a lot on how quickly the zoning plan changes, “added Deputy Petr Palička from Penta Real Estate.

Hlaváček also said that he also really liked the proposed solutions, which were placed in other places. “I definitely want to cooperate with both teams in the future in the future form of Těšnov, the form of new public buildings and the park and the shift of the main road, their solution is definitely the best. It’s a very long run, but if we don’t start, nothing will ever change, “he said.

The competition was non-anonymous

The urban competition was announced non-anonymously in the form of a workshop. “The necessary transformation of the entire territory of Florence has been debated since about 2008, and several more or less successful mass studies have been created. In 2020, we agreed with another owner of part of the land – ČSAD and the city, that we announce an international competition. This is the first attempt to enter this area “with the city”, ie to transform it into a location where people will live, work and relax well, “said Palička.

The competition had two phases. The zero phase was open to anyone who met the strict conditions. The participants, who eventually applied for 57, had to have experience with urban planning and brownfield revitalization. Once the applications were closed, the public could get involved. There was participation with the public, both in the form of an information container and online. Praguers could also send in their ideas of what they promised from the transformation and what problems bother them the most. In May, the expert jury selected the finalists, followed by an exhibition in CAMP of the latest proposals, and on December 1, the jury announced the winner. 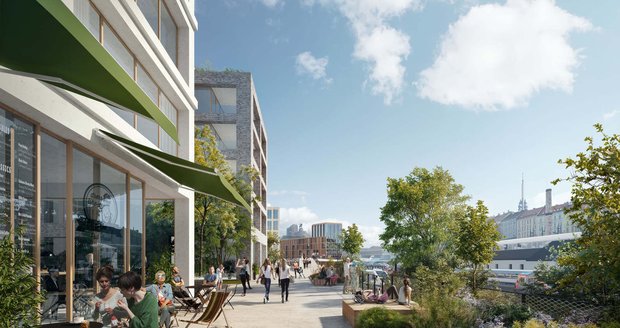 Prague is already dealing with the Novavax vaccination. The questionnaire ascertains the interest of health professionals and social workers iROZHLAS

There will be two lanes behind the exit from Blanka to the main road, they have proven themselves

Radio DAB Prague starts broadcasting from a new studio. Look at its transformation after the reconstruction