He won another international competition with the Aquaticum Debrecen Strand video

Debrecen – The beach and the design team in Debrecen win prestigious prizes. They have now received an award at a world exhibition in Barcelona.

As we reported two weeks ago, Aquaticum Debrecen Strand made it to the finals of the Piscina & Wellness expo architecture competition in the Community Projects category. The beach designer BORD Architects Studio has now posted on its Facebook page that they even won the award.

The category rewards not only the buildings and their innovative solutions, but also the impact on the community, its conscious placement in the urban fabric, and its social, health and tourism effects. The award was accepted by Péter Bordás, chief designer, owner of BORD and Ádám Kovács, head of the cabinet of the mayor’s office.

The Piscina & Wellness (Pools and Wellness) expo will be held for the 27th time this year from 29 November to 2 December in Barcelona. All participants, from architects, designers and pool technicians to investors and municipalities, will be invited to the World’s Fair.

The organizers are expecting 400 exhibitors at Piscin & Wellness and will report 12,000 visitors accordingly.

Péter Bordás gave a talk about the bath in Debrecen the next day. On behalf of the organizers of the Piscina & Wellness expo, a Spanish crew recently visited the city to shoot from the beach.

The new beach in the Great Forest opened last summer.

The beach has won the favor not only of the audience but also of the profession. Already at the planning stage, the beach was ranked among the best tender plans of the recent period by the Dutch Mark Magazine, which focuses on contemporary architecture, and in January this year, by the Royal Institute of British Architects. Aquaticum Debrecen Strand was on the front page.

The Aord Awards, announced by the largest international architectural platform, Architizer, were finalized in two categories by Bord Architect Studio with the plans of the Aquaticum beach bath in Debrecen. Although the beach was preceded by another investment in both categories in the public vote, Aquaticum Debrecen Strand in the Architecture + Engineering category received the jury award. The Aquaticum has overtaken buildings such as the award-winning Dubai Museum of the Future, Skyboat in China, the Paper Store Museum in Cambridge and Crystal, the horizontal skyscraper in Chongqing. 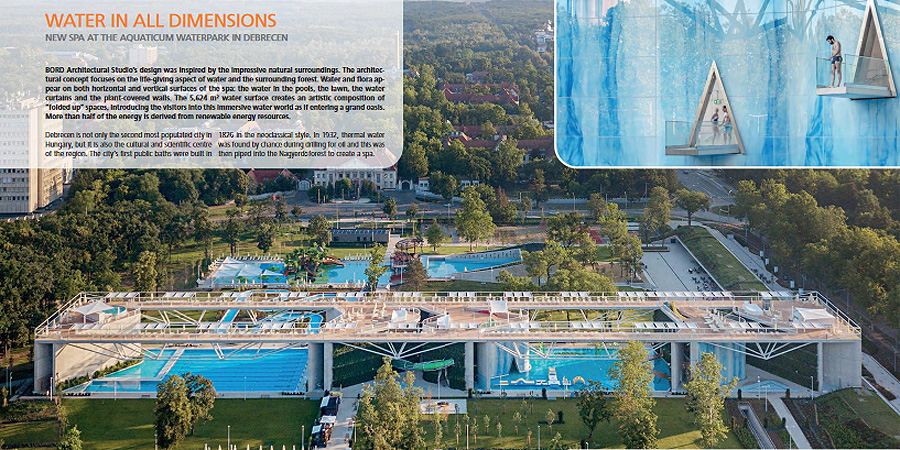 The design team of Aquaticum Debrecen Strand received the Green Good Design Award last April at the European Center for Architecture Art Design and Urban Studies and The Chicago Athenaeum International Museum. The new beach in Debrecen has been chosen as one of the best sustainable architectural works in the world.

The beach in Debrecen became a cover story for another international magazine in July. In addition to the cover photo, SB Magazine presents the spa on six pages. The magazine, published by the International Federation of Sports and Leisure Services, is the world’s leading magazine for sports and leisure facilities. A magazine can be read here.

‹ The eighth attempt came out. Krejčíř ‘s villa in Černošice near Prague was auctioned for 21.38 million crowns iROZHLAS › Corona has been causing the highest death rate in Salzburg for 60 years