“A drunken man in the road is stumbling on Strakonická Street in the direction of Prague,” was the announcement received by the city police on Friday after eight o’clock in the evening. A very drunk man had difficult ambitions, he wanted to cross the road, but his condition did not allow him to do so and instead threatened himself and the driver.

The aggressive drunk vulgarly cursed the guards. When he tried to attack, he ended up in handcuffs Prague City Police

The city police patrol saw the man at a nearby public transport stop, the drunk was unable to stand and was leaning against the railing. The man communicated with the guards, but he did not want to sit down and kept trying to enter the road.

He ended up in handcuffs

“The 47-year-old man refused the breath test. At one point, he was ridiculed by the guards who secured him, and they caused a bleeding head injury during the fall, “said Jiřina Ernestová, a spokeswoman for the city police. The patrol summoned rescuers who had to try to treat the man. The drunk was aggressive in the ambulance, vulgarly cursing at the guards and rescuers he managed to help. The patience of the patrol came only when the man tried to physically fall and destroy the rescue equipment. The man ended up on a lounger in handcuffs.

“Verbal insults often made the staff at the hospital, and he eventually refused treatment. Accompanied by police officers, he was transferred to a detention center and his offense will be dealt with by an administrative body, “Ernestová added. 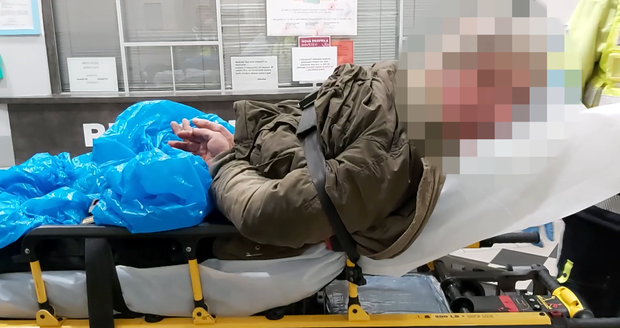 The aggressive drunk vulgarly cursed the guards. When he tried to attack, he ended up in handcuffs

‹ Man in Lichtenberg insulted and spat on: Racist attack in Berlin documented on Twitter – police find woman – Berlin › The young designers of San Marino were awarded by Ucs and Usl