The first suspected Omikron case occurs in Austria. After the new virus mutation B.1.1.529 has already appeared in other European countries, according to the state of Tyrol, a positive PCR test result associated with a trip to South Africa was available in the Schwaz district on Saturday evening.

After the initial test by Innsbruck Virology there is a specific suspicion that it is the new virus mutation, the state informs in a broadcast. 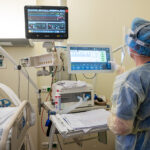 The infection affects a person who tested positive for Covid-19 after a trip to South Africa. As the country announced, according to their own information, the person concerned has only been at home since returning three days ago and is currently not showing any symptoms.

The person has already received two doses of an mRNA vaccine (either Biontech / Pfizer or Moderna; note), but the second sting was around nine months ago. In any case, the contact persons have been segregated.

The test sample will now be sent to AGES in Vienna for sequencing, explained Elmar Rizzoli, head of the Corona task force. There, the virus composition will be examined in detail. “A result from AGES will be used to calculate in the coming days,” commented Rizzoli on the further course of action. Rizzoli recommended “people who have come from the defined countries (South Africa, Lesotho, Botswana, Zimbabwe, Mozambique, Namibia and Eswatini; note) in the past 14 days to carry out a Covid-PCR test as a precaution”.

Previously, among others, the Italian and German authorities had confirmed Omikron cases. The virus variant was found in air passengers who had arrived in Munich or Milan several days ago. Even in a suspected case in Liberec (Reichenberg) in northern Bohemia, Omikron was confirmed “with around 90 percent certainty,” it said in the evening. The official authorities reported two cases and imposed quarantine on all travelers.

Belgium was the first European country to confirm an Omikron case on Friday. However, the Netherlands is viewed with particularly great concern, where 61 of 600 passengers on two flights from South Africa tested positive for the corona virus on Friday. Rapid tests corroborated the suspicion that they too carry the new variant. The Dutch authorities are 95 percent sure about this, it said.

Like many European countries, Austria had sealed itself off from southern Africa on Saturday and imposed state bans. The virologist Norbert Nowotny said on Friday evening in the “ZiB Nacht” that he expected the variant to arrive in Austria in one to two weeks. Federal Chancellor Alexander Schallenberg (ÖVP) said he thought it was only “a question of time” until the new variant came to Austria. “It is up to us all to fight it together by getting vaccinated as quickly as possible,” was the Chancellor’s appeal.

The AGES telephone hotline for those returning from southern Africa is very popular. By Saturday noon, 300 people had already registered on 01/26 75 032. There you will find information on where to turn for an official PCR test.

The omicron variant discovered in southern Africa combines mutations that had previously occurred in different variants that were worrying. The EU health authority ECDC speaks of serious concerns that.

Börse Express – Takeda is Top Employer 2022 internationally and in Austria

‹ In San Marino inaugurates “The Christmas of Wonders” Italpress news agency › Cold is here to stay and… it’s already snowing in Portugal. Here’s how images