Fake certificates at the airport: He didn’t have a point, he ran away from the police! described the agent

In order for people to be able to leave the Czech Republic, in addition to a valid travel document, a completed entry form to the destination country, if required, and a certificate of infectivity are currently required. The team can be either a vaccination certificate, a valid negative test or a covid-19 certificate. However, there are people who are trying to circumvent the regulation, as evidenced by the case that took place at Prague Airport in recent days.

“At the check-in of my own volition, I started checking the certificates not by sight, but by the reader. It took exactly five passengers when the name somehow “didn’t fit” on the paper,“On Thursday evening, he described on Twitter a man who, according to information in the profile, works for the airline Smartwings and also at Prague Airport as a handling agent. When one of the passengers asked for the correct certificate, he allegedly began to make excuses that he would not get to the e-mail, and not on the website of the Institute of Health Information and Statistics, where he could download the certificate. “He had no point. So they don’t fly, “ the agent added, calling the police, but the man escaped.

According to Smartwing spokeswoman Vladka Dufkova, there are cases forgery of a document of infectivity appears from time to time, however, these are so far the only cases in the entire pandemic period. “Checks for infectivity at the airport are carried out by the handling company with which the carrier cooperates. If the handling agent finds a suspicion of the falsity of the certificate of infectivity, it is resolved with the police, who take the case for investigation, and the passenger is refused transport, “she described how the process works.

“In the past, there have been two cases where a person has shown a false PCR test, “Foreign Police spokeswoman Renata Grecmanová told Blesk. According to her, there were also two cases of fake vaccination certificates.

According to its spokesperson Klára Divíšková, the airport is facing, for example, a failed validity of the result or an incorrectly performed type of test. “This can happen, for example, when the conditions for traveling to a state change. As for the certificate, there is no sign of authenticity, so we cannot 100 percent assess whether it is genuine. Only very bad counterfeits were detected or the date of issue of the certificate did not match the date of departure, because only the name was changed in the forgery and no other dates, “Divíšková told Blesk.

The question is also raised by the use, respectively. not using QR code readers when checking certificates. “I’ve flown at least ten times since my passport was valid, and no one has checked it with a reader until Monday in Malta. Otherwise, papers everywhere, “said one of the passengers. According to Divíšková, the question is the use of a code reader for individual airlines, it depends on which method of control they prefer.

How is a sin punished? “In the event that the passengers violate the protective measure of the Ministry of Health, it is the matter is referred to the administrative authority competent to deal with the offense, and thus in this case the locally competent regional hygienic station, “said Grecmanová.

However, according to the Supreme Public Prosecutor’s Office, forgery of covid certificates or presentation of a forged or altered certificate can be a criminal offense of forgery and alteration of a public document, for which there is a risk of up to three years in prison. This applies to both paper and electronic certificates. “The assessment of criminal liability depends on the specific circumstances of each case, as assessed by the competent public prosecutor., “Said the office. 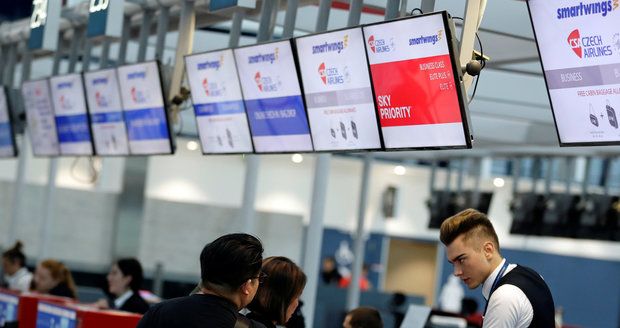 Passengers with Smartwings at Václav Havel Airport in Prague