In the third quarter of 2021, the number of dwellings started in Prague includes a significant increase (by 345.3%). On the contrary, the number of completed dwellings decreased slightly by as much as 2%. A year-on-year decrease was also recorded in building permits and notifications (by 27.4%). The approximate value of constructions increased enormously (by 644.2%), mainly due to civil engineering constructions.

In an inter-regional comparison, Prague was in the first place in the number of started flats before Central Bohemian (2,195 dwellings started) a South Moravian Region (1,713 started flats). The smallest construction took place in the two least populous regions – in Karlovy Vary Region, where 321 flats were started, and Liberec Region, in which 314 apartments were started. In year – on – year comparison, the number of started dwellings increased the most in Prague (by 345.3%), in Liberec Region (62.7%) a South Moravian Region (55.4%). On the contrary, the largest declines were recorded in South Bohemian Region (-42.3%), v Olomouc Region (-33.5%) a Moravian-Silesian Region (-10.3%).

In terms of the type of construction in Prague, more than 93% were new construction. In the remaining less than 7%, it was a change in completed constructions, ie various constructions, extensions and other building modifications. Depending on the type of construction, most flats were traditionally started in new apartment buildings (2,733 flats), which is due to the typical urban development in Prague. In contrast, 125 flats were started in new family houses. In the case of family houses it was a year-on-year increase of 19%, in the case of apartment houses there was a large increase of 507.3%.

According to preliminary data, in the third quarter of 2021 it was in Prague issued a total of 722 building permits and notifications. Compared to the same period in 2020, their number fell by 27.4%. Thus, Prague’s permit was the only region, while the number of issued construction declines. 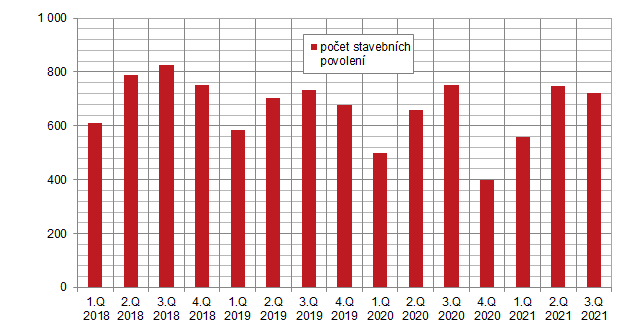 Data for 2021 are preliminary.

More information about housing construction can be found at time series.

Where to go with the children after the report card. An overview of the best swimming pools in Prague and its surroundings

‹ Warsaw. Carol Rosenfeld’s performance as part of the Master Theater Academy › Prague and the organization of the Czech Skateboarding Championship in Štvanice