The political crisis in Belarus after the presidential elections in 2020 affects not only what is happening inside the country – it also led to its international isolation. How does this affect academic contacts? DW found out the current state of relations between Belarusian and German universities, as well as whether German programs to support students and scientists from Belarus still work.

What has become of DAAD support

The main German organization that promotes the development of ties between students, scientists and teachers of the two countries, providing scholarships, is the German Academic Exchange Service (DAAD). But at the request of the authorities in Minsk, she, like the Goethe-Institut, had to cease activities at the end of July. The DAAD information center, which worked at the Belarusian National Technical University (BNTU), was accordingly closed. However, the Bonn headquarters of this organization emphasize that DAAD, for its part, does not refuse to support the Belarusians. Opportunities for studying or pursuing science in Germany still exist for them, they are on the website www.daad-belarus.org. The scholarship database contains over 90 proposals for academic exchange. You can get a consultation by e-mail: [email protected]

In addition, in connection with the intensification of repression against students and scholars who supported the Belarusian protest against Lukashenko, a scholarship program named after Hilde Domin, a German writer who had to flee Germany in the 1930s (Hilde Domin- Program). Students and graduate students forced to leave the university in Belarus can complete their studies in Germany and receive a German diploma. True, they themselves cannot directly apply. First you need to contact one of the German organizations associated with Eastern Europe, Amnesty International or one of the German universities-DAAD.

But in addition to cooperation with the participation of the German academic exchanges, the universities of the Federal Republic of Germany also maintained relations within the framework of one service of bilateral agreements. Recently, a message circulated on social media. Indeed, DW confirmed such intentions at the university. “Due to restrictions on academic freedom and repression against students and scientists in Belarus, there is no longer a single value basis for cooperation with Belarusian state universities,” Sara Batelka (Sara Batelka) from the communications department of the University of Bremen explained this decision.

According to Batelka, there has been no active cooperation in recent years. Also, a decision is now being made to terminate contracts with the main university in Belarus – BSU.

As noted in personal relations with the Belarusian participants. Instead of advertising agencies aimed at supporting Belarusian scientists and students through non-governmental organizations. So, Belarusians can attend online courses at this university. The university has already hosted one person under the Hilda Domin program. Other applications are pending.

University of Jena: agreements with BSU not broken, but frozen

At the University of Jena, where partnership agreements with the Belarusian State University have also been concluded, they note that the university does not terminate these agreements, but at the moment a formal cooperation agreement has been concluded. “Of course, our university is following the development of the situation in Belarus with great concern and therefore now does not see the necessary foundation for cooperation,” says Axel Burkhardt (Axel Burkhardt), an employee of the press service. However, the connection with Belarusian students and scientists has not been cut off. And now in this university in the east of Germany they are thinking about how to most effectively find support for them. 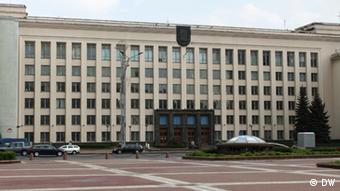 Belarusian State University (BSU) is the oldest university in Belarus. In 2021 from celebrated its centenary

The influence of Belarusian universities on cooperation with partners in Germany does not write. The DW request sent to BSU and BNTU remained unanswered.

University of Tübingen: cooperation in doubt

At the University of Tübingen, DW also said that “a strong politicization of the Belarusian system of higher education, in particular, the fact that Lukashenko appoints university rectors, as well as the participation of university leaders in suppressing protests.” This university in the south of Germany has five Belarusian partner universities, with which it worked under the Erasmus exchange program. In July, the funding period came to an end. The deadline for the next fundraising application is February 2022. The final decision has yet to be made, but according to DW Antonino Spinelli, the caller for the exchange program, not submitting enough.

Here they prefer direct assistance to students. In July, the university nominated several students from Belarus to participate in the Hilda Domin program, but so far to no avail – the university regretfully notes that there are bureaucratic difficulties. To avoid long delays, the international department of the university in Tübing is also independently looking for ways to provide assistance. So, he managed to invite to study a student of the Moscow State Linguistic University, who was at risk of being arrested for participating in protests last year. She is now studying for a master’s degree and receiving a scholarship from the fund of a German university. In the same way in Tübingeneyut to help several more Belarusians.

Belarus to buy medicines from Cuba in exchange for equipment

Belarus interested in building up trade and economic cooperation with Oman

‹ Toulouse. The Fenix ​​reserve was able to re-mobilize in time to overthrow the leader › These 2G rules apply from today in Berlin