Don’t just talk about the weather

11/15/21 In Salzburg you can not only talk about the weather. The Salzburg Museum, together with the Language Center of the University of Salzburg, provides the right vocabulary for non-residents: With a language course for German learners who want to learn more about art in Salzburg and also want to talk about it. I would also be happy to do that with locals.

“The enthusiasm of the participants was great,” reports the Salzburg Museum: “In addition to important knowledge about the city in which they live, the course also gave them new motivation and a new self-confidence in the language.” Tze Linn, a former course participant, sums it up: “You don’t always want to talk about the weather. Salzburg is so beautiful, but you also want more when you talk to local people. ”

Based on the feedback, the language center is also developing new materials for linguistic and cultural learning in the museum. An art educator from the Salzburg Museum and a German teacher will explore the Panorama Museum, the Hohensalzburg Fortress and the Salzburg Glockenspiel together with the “German learners”.

The cooperation between the Salzburg Museum and the Language Center of the University of Salzburg began years ago as part of the third-party funded project “Say it simply. Say it out loud Easy language as the key to the museum ”.

The language center took on the conception of a German course in the museum, which was carried out in conjunction with the special exhibition “Tell me about Salzburg”. The topics of the exhibition were taken up in the course over a semester and dealt with under the guidance of a German-as-a-second-language teacher and an art and culture mediator.

According to the Salzburg Museum, those responsible were impressed: “The cooperation with the Language Center of the University of Salzburg made it possible to create a technically and didactically sound course concept. The added value is that the course takes place in the museum and understands the Salzburg Museum as a place of exchange and encounter ”, says Martin Hochleitner, Director of the Salzburg Museum. Martin Weichbold, Vice Rector for Teaching and Studies at the University of Salzburg, sees the project as a successful example of the university’s social openness: “It is very important that the concepts we have developed have a lasting effect in practice. The large amount of positive feedback, including from specialist circles, shows that this project has succeeded in an exemplary manner. “ 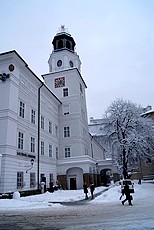 The title is not that easy, so a course doesn’t hurt: “SpraKuS. Linguistic and cultural learning in the Salzburg Museum. Paths to Participation ”is the official name of the project funded by the State of Salzburg and the Salzburg Museum. THE concept is currently being developed for a semester-accompanying course for the upcoming special exhibition. “This course will be offered every semester in the Salzburg Museum from spring 2022. In addition, individual modules were created that can be offered by the Salzburg Museum to interested groups as required, regardless of thematic exhibitions. ”The modules focus on the Hohensalzburg Fortress, the Glockenspiel and the Panorama Museum. The books can also be used by joint study groups for excursions. (Salzburgmuseum / dpk-klaba)

Fourth vaccination for all expected in autumn