PRAGUE: Give the idiots an office, invent a brand

Do you have Kocourkov like us at Pankrác? I would like to point out that I do not have a driver’s license and I will always stand up for pedestrians against cars, but …

Anyone who turns from the main street Na Pankráci to its branch branch can (after an extremely sharp turn in the style of alpine serpentines) at its very beginning easily overlook the dead end sign. It is probably correctly positioned, but ignorant drivers do not register it over the bushes. The first turn from here is Hradeckých Street, and he finds out that it is blind – the end blocked by the containers gives a clear signal. Whoever despises this turn will see a few meters ahead of the classic entry ban with the termination of the traffic staff. And asphalt roads that no one knows: is it a road or a sidewalk?

If I’m taking a beer to one of the two local pubs, I’ll probably want to continue and turn left. But I’m surprised: an entry with the support of an integrated rescue system! It is new here, before that there was also a ban on the supply bar on the pole. 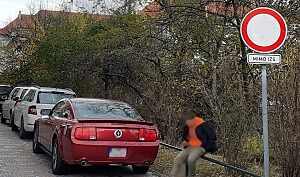 There is nothing against it, the supply of a more distant pub regularly started the whole communication so that mothers with a pram and disabled people on sticks had to return by detour across Hradeckých Street. In addition, instead of reversing, one pub preferred to go directly to the adjoining sidewalk and from there, after some twenty meters, to the main road. He saved time.

But the current reality … Do firefighters and rescuers park here? Do police officers bring basses of beer here? What about pub? Has he improved? (correct answer to all questions is “no”)

took place at the same place, only a few tens of meters lower, from the main branch of Na Pankráci street it was possible to turn right into Lomnického street in the last decades. However, during this year’s reconstruction of the intersection, this turn became forbidden. The horizontal markings are clear, only its driver driving in line to the traffic light does not have to notice between the wheels of the cars. Vertical markings also exist, only the traffic sign is quite small, especially when the orientation arrows just behind it the names of all the streets at the intersection, including one forbidden Lomnický. The official will say that the driver should pay attention to the traffic signs in all circumstances, and he will be right. In addition, if the column is not in front of a traffic light, at least the arrows on the asphalt with the commanded direction of travel cannot be overlooked.

So why do we regularly see one or two drivers turning in a forbidden direction every time we cross the Lomnický crossing?

I believe that the problem is not only certain numbs some drivers to traffic signs and regulations. In addition to the obvious bullshit (greetings of BMW Mr. Pub), there are certainly individuals who have complied with a number of orders and prohibitions and their constant changes.

It is also bad that the traffic signs are not consulted in advance with a local police officer, who walks through the locality twice a day and knows the situation well. So – if there is one.

And most importantly, it is wrong to enter an order, enter a ban and not check compliance. Every parent, every teacher, every boss knows everything, but officials enchanted by the temple and paragraph like the Frodo Ring do not know that. What would help: a new situation has arisen, after decades the turn has changed, the entry ban has changed, so first warn and admonish, after two months fine. Or reconsider the situation and lift or reformulate the ban again.

It seems like a purely local matter, but the principle of the current situation in Pankrác is, I think, completely universal. And what about you? Kocourkov too?

Taken from the author Palettes of views and birds