The Russian national ice hockey team won the first victory in the Karjala Cup. In the final round, Sergey Zubov’s charges defeated the Czech team with a score of 5: 2. The most productive player of the match was Dmitry Voronkov, who scored a double and gave an assist. An excellent meeting was held by the goalkeeper Dmitry Shugaev, who made 38 saves. 16-year-old Matvei Michkov recorded one assist in his asset.

In the history of the Karjala Cup, there has never been a case that the Russian national team left the first stage of the Euro Hockey Tour without at least one won match. Even if the tournament began with two defeats, it was necessary to finish the performance on a positive note. The current draw was no exception – the Russian youth team at the last moment managed to please themselves with a victory over the Czech national team.

For Czech hockey players, the Eurotour began as disappointingly as for the wards of Oleg Bratash and Sergei Zubov. Philip Peshan’s team lost to Sweden and Finland, conceding four goals in both matches. Such an unsuccessful performance could be explained by not the optimal composition – only three defenders from the KHL clubs entered the Czech application, and of them only Spartak Yakub Erzhabek played until the last day. Lukasz Klok from Neftekhimik never came out on the ice, and David Sklenichka, who made two assists, had to return to Jokerit ahead of schedule.

Michkov’s miracle goal, defensive mistakes and problems with the majority: how Russia lost to Sweden in the Karjala Cup

The Russian national ice hockey team suffered a second defeat at the Karjala Cup in the Eurotour. Domestic team, which instead of Oleg …

Changes to the Saturday game have also taken place in the Russian team. Zubov, who took over the duties of a mentor from Bratash, did not change only the second three, in which 16-year-old Matvey Michkov and Artem Galimov organized two goals for the Swedes. In the first, it was decided to change the position of captain Dmitry Voronkov and send him to the left flank, and release Marat Khusnutdinov in the center between him and Dmitry Rashevsky. Not without rotation in the goal – Yaroslav Askarov, who missed four goals, gave way to Dmitry Shugaev.

From the starting throw-in, the Russians headed for a foreign zone, for which the Czechs were not quite ready. It was necessary to restrain the first link at the cost of a foul, and already in the second minute Lukasz Jasek received a minor penalty for a violation at Khusnutdinov. But the Czech striker thus only slightly delayed the first goal of the match. Zubov’s wards were firmly entrenched at the gates of Shtepan Lukesh, and soon Alexander Yelesin threw powerfully from the left throw-in circle – for the first time in this Karjala Cup, the Russian team managed to realize the majority.

The pressure on other people’s gates after the first puck did not decrease, and the attempts of the Czechs to go on the offensive were harshly suppressed – after Yelesin’s power move, Jiri Smeikal even rolled his skate and rolled on one leg into the locker room. Only in the second half of the period, Peshan’s charges began to check Shugaev’s reaction, but he inflated Zubov’s confidence.

Five minutes later Michkov managed to get out of his zone – he broke through on the left edge, made a shot and returned the puck after the rebound, but the partners did not complete this dangerous moment. Soon the Czechs again presented the Russians with the majority game and paid for it. Khusnutdinov gave the pass to Voronkov on the spot, and the captain sent the puck into the net.

The second period had to start in the minority – Shakir Mukhamadullin got 16 seconds before the break. The Russians passed this test without noticeable efforts, and with the return of the defender, the third puck flew into Lukesh’s goal. After another match of Michkov, she got stuck in the goalkeeper’s ammunition, but Voronkov managed to send her for the “ribbon”. The team’s focus on other people’s gates knew no bounds, and the fourth goal did not force itself – in the 32nd minute, Nikita Tertyshny completed an exemplary counterattack. 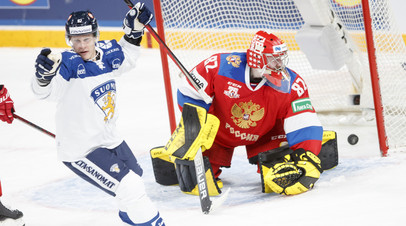 Michkov’s debut, seven deletions and lack of experience: how the Russian national hockey team lost to Finland in the Karjala Cup

The Russian national ice hockey team from the beginning of the performance at the Karjala Cup. Oleg Bratash’s charges lost to Finland with a score of 0: 3 ….

Until the end of the second 20-minute gap could have increased to five goals, but in the end the teams left for the break with the score 4: 1. Voronkov almost scored a hat-trick, but threw the puck near the post, after which he was immediately sent off for footrest. 58 seconds before the siren, the Czechs finally opened the Shugaev goal, when Michal Rzepik distracted half the team, and the puck was thrown by Matej Stranski.

In the third period, the Russian national team switched to an energy-saving mode and no longer climbed so actively into other people’s gates, which were now defended by Peter Kvacha. The Czechs did not immediately, but drew attention to this and tried to save the match. If David Kasche had a little more luck, this could very well have happened. First, the Czech striker hit the crossbar, and after a couple of minutes he was already accurate when throwing from an acute angle. This moment inspired the rivals and provoked a real assault on Shugaev’s goal, which intensified with the departure of Kvachi from the ice. In total, the Czechs made 40 shots during the match, but the goalkeeper coped with the vast majority of them.

Attempts by the Czech national team to play two goals in time were stopped by Galimov. To respond to Voronkov’s pass, he beat the defenders in a foreign zone and hit an empty net. Michkov also wanted to earn a goal, but missed the target a little with a throw from his own patch. The Russian national team won with a score of 5: 2 and for the first time in the Olympic season pleased the fans. The next event will take place in the Channel One Cup, where the team will be headed by Alexey Zhamnov.

The most annoying foreign words for Russians are named: Society: Russia: Lenta.ru

Davis Cup – 2021: schedule of matches of the Russian national team, where to watch, what time, lineups, who is playing, format

‹ Toulouse: “The breach of lawyers’ secrecy constitutes an attack on democracy” › Week of Tolerance, a message of fraternity from the pavilion of the Holy See