AS Monaco wishes a happy birthday to its former French international midfielder, 2017 French champion, Thomas Lemar, who is celebrating his 26th birthday today.

It all started in Guadeloupe for Thomas Lemar. His life, first of all, since he was born in Baie-Mahault, just next to Pointe-à-Pitre. Then football, because it is on his native island that the Guadeloupe touched his first footballs, before taking off for France and Stade Malherbe Caen in 2010. The left-hander joined the training center of the Norman club and signed his first professional contract three years later. The SMC is in Ligue 2, and it is in this championship that Thomas Lemar will play his first minutes of pro play, with the Calvados team.

A left paw in Gold

For his first season with the grown-ups, Thomas Lemar played “only” nine games (including two in the Coupe de la Ligue), when he still managed to make an assist. Caen is promoted to Ligue 1 and the Guadeloupe can then express himself among the elite even if he mainly occupies a joker role. During his first season in the first division, Thomas Lemar played 25 games but only started six times. Despite this, the potential is there and AS Monaco realizes it.

After two seasons in Normandy, the one that counts today 27 selections for the French team (4 goals) signed in favor of the Principality Club. On the Rock, Thomas Lemar will take off. Little by little, the number 27 will prevail and become a key element of Leonardo Jardim’s team. During his first year with the Rouge et Blanc, the French international participates 26 Ligue 1 matches. He scored five goals and delivered three assists, proof of his undeniable talent. 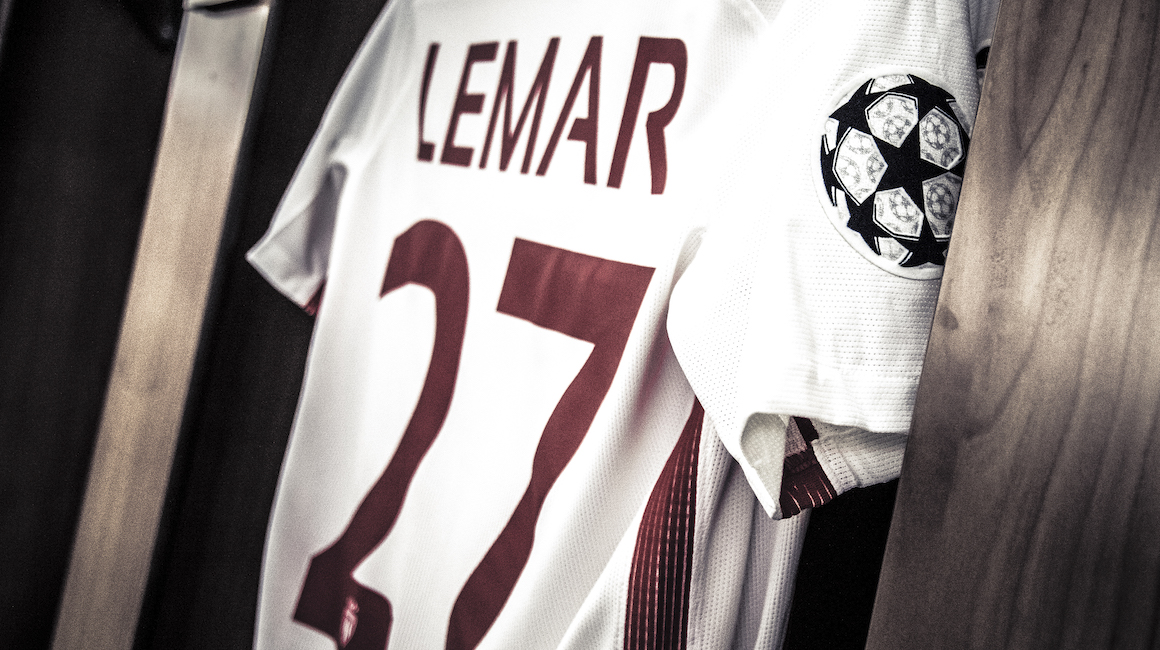 A resounding debut in the Champions League

In addition to that, Thomas Lemar contests his first European minutes, in the Champions League play-offs and then in the group stage of the Europa League. Europe, Thomas Lemar will fully reveal itself the following season, during the 2016/2017 financial year which will lead AS Monaco to the semi-finals of the Champions League. During this European campaign, the left-hander participates in almost all of the matches and is decisive.

First against Tottenham in groups, since he scored, in the first leg as in the return leg, the second goals for AS Monaco allowing the Club to win 2-1 each time. Then during the knockout stages, when he notably deposited the free kick on the head of Tiemoué Bakayoko against Manchester City or during the double confrontation against Borussia Dortmund, during which he delivered a total of three assists decisive on the six goals scored by AS Monaco.

Lemar, custodian of the ball on Bakayoko’s head against City

In addition to his remarkable performances in the Champions League, Thomas Lemar distinguished himself in the league. He played a total of 34 games, scored nine goals and delivered ten offerings to his partners, which allowed him to finish second in the ranking of the best assisters in Ligue 1 during this 2016/2017 season punctuated by the eighth French league title. of AS Monaco.

The following season, Thomas Lemar confirmed all the good things he had heard, which earned him a place in Didier Deschamps’ list of 23 for the 2018 World Cup. In Russia, the French international thus became world champion alongside notably Benjamin Mendy, Kylian Mbappé and Djibril Sidibé. This coronation comes a little more than a month after the announcement of his departure from the Club, since Thomas Lemar has indeed chosen to leave in June 2018 for Atletico Madrid, where he still plays, to pursue his career.

At what times and on which channels to follow Monaco, Lyon, Rennes and Marseille?