130 years to Yuri Rutkovsky. How a Pole created a Russian Drama Theater in Alma-Ata

In 2021, the Central State Archives of the Republic of Kazakhstan celebrates its 100th anniversary. Over its century-long history, the archive has collected rich documentary materials on the history and culture of our country, which have been deposited in funds of personal origin. So is the personal archive of the Honored Art Worker of the Kazakh SSR, Honored Artist of the Kazakh SSR Yuri Ludvigovich Rutkovsky, who stood at the origins of the creation of the State Academic Russian Drama Theater. M.Yu. Lermontov, a special place in the documentary heritage of outstanding cultural figures of Kazakhstan.

Yuri Ludwigovich Rutkovsky was born on November 21, 1891 in Warsaw (Poland). His father was a mechanic in the workshops of the Privislensky Railways, then an actor. From 1898 to 1903, Yuri studied at the city school, then for 3 years – at a technical school of an advanced type.

In 1906, the whole family of Yuri Lyudvigovich moved to Chelyabinsk (Russia) to stay with relatives. His uncle, a former political prisoner Anton Iosifovich Kvatsinsky, lived there. The young man continued his studies at the technical railway school. In 1909 he went to work in a private turning workshop in Osinsky. Soon, Yuri’s father fell seriously ill, and he was transported to Warsaw, where he died in 1910. In connection with the death of his father, Rutkovsky returns to his homeland. He works in the technical office of the engineer Eber as a construction technician and at the same time enters the theater studio, from which he graduated in 1913. In February 1914 he was admitted to the troupe of the Warsaw Art Theater. He did not serve long in the theater.

In November of the same year, he was mobilized for military service – he participated in the Imperialist War (World War I), was a private in the 33rd motorcycle branch of the Ussuriysk brigade of the 5th Army of the Russian Emperor of the Army.

At the end of 1916 he was enlisted as a private in the 1st reserve Siberian regiment. He was wounded and was in a hospital in Petrograd. In May 1918, a medical commission exempted him from military service.

After the end of the war, Rutkowski was unable to return to German-occupied Warsaw and remained in Russia.

From that time on, Rutkovsky’s theatrical activity, which had been interrupted earlier, began. During the Civil War, he worked in agitation centers, agitation trains, the road political department of the Omsk railway. In Omsk, Rutkovsky meets his wife Elizaveta Boleslavovna Kruchinina (maiden name Przhbalskaya), who was the leading actress of the theater. By the way, the personal archive of the People’s Artist of the Kazakh SSR Ye.B. Kruchinina-Rutkovskaya is also kept in the Central State Archive of the Republic of Kazakhstan. 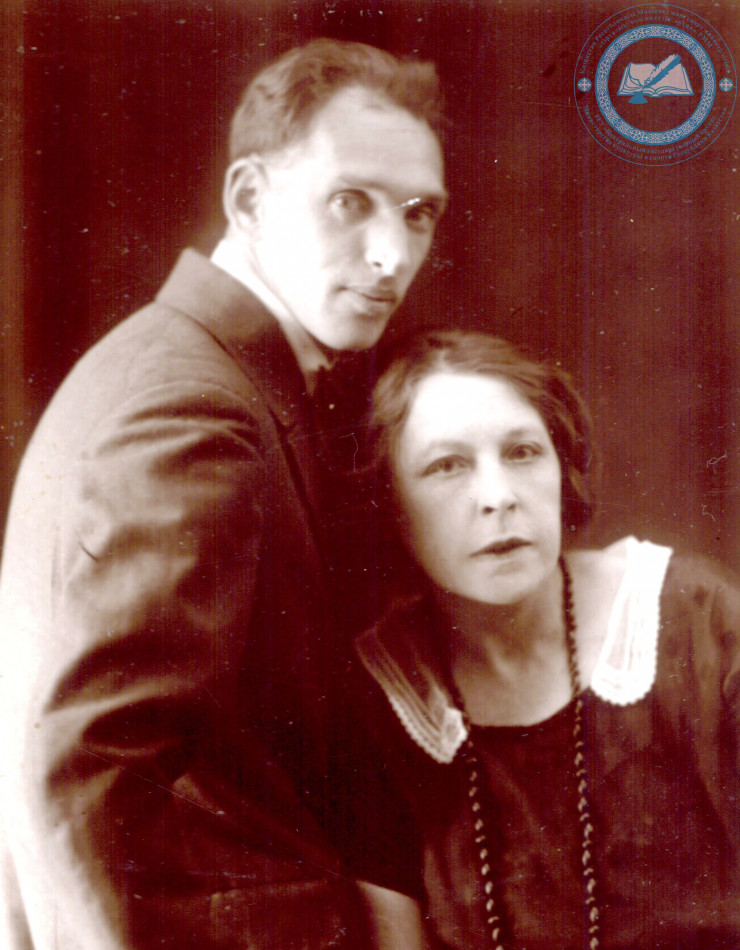 Gradually, a permanent team was formed, in which Yuri Lyudvigovich was a director and foreground actor. He served in many drama theaters in Belgorod, Bobruisk, Gorky, Kursk, Nizhny Novgorod, Omsk, Stary Oskol, Tashkent and other cities.

His troupe performed with great success. Rutkovsky’s documents preserved evidence (certificates, certificates and others) about the successful tours of his troupe, for example, the certificate of the Rylsky district committee of 1925, which says: “The brought troupe of artists comrade Rutkovsky turned out to be highly artistic and managed to interest the whole city from the first performance “So much that the theater attendance has greatly increased …” (Spelling preserved). 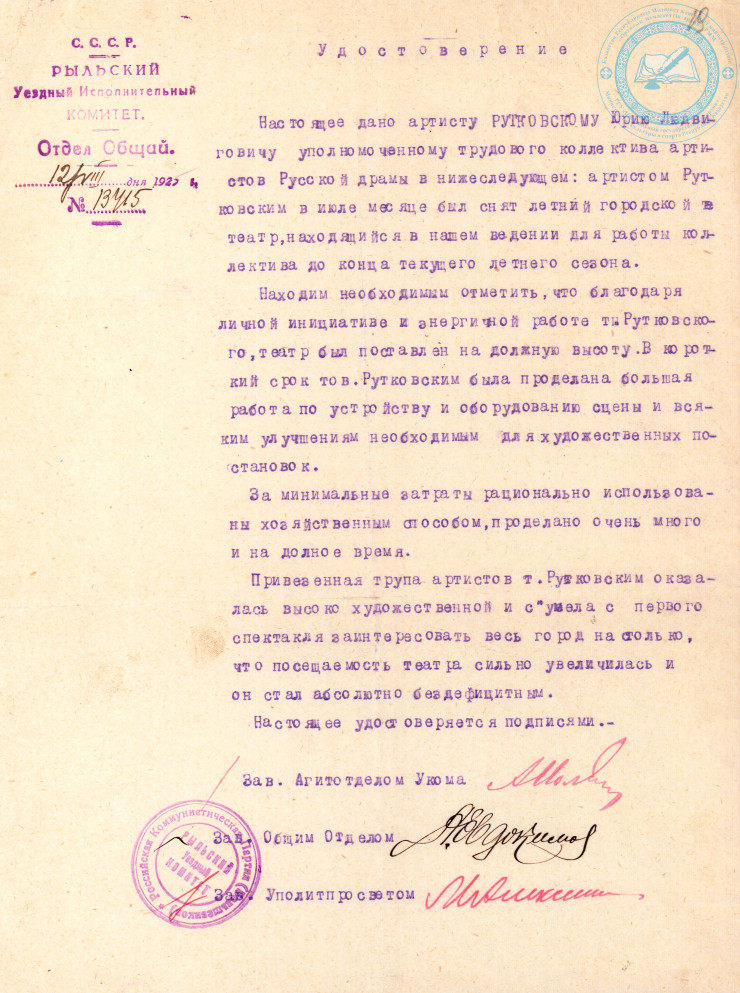 Certificate of the Rylsky district executive committee of the work of Yu.L. Rutkovsky and his troupe. 1925 Central State Administration of the Republic of Kazakhstan. F. 1712. Op. 1.D. 28 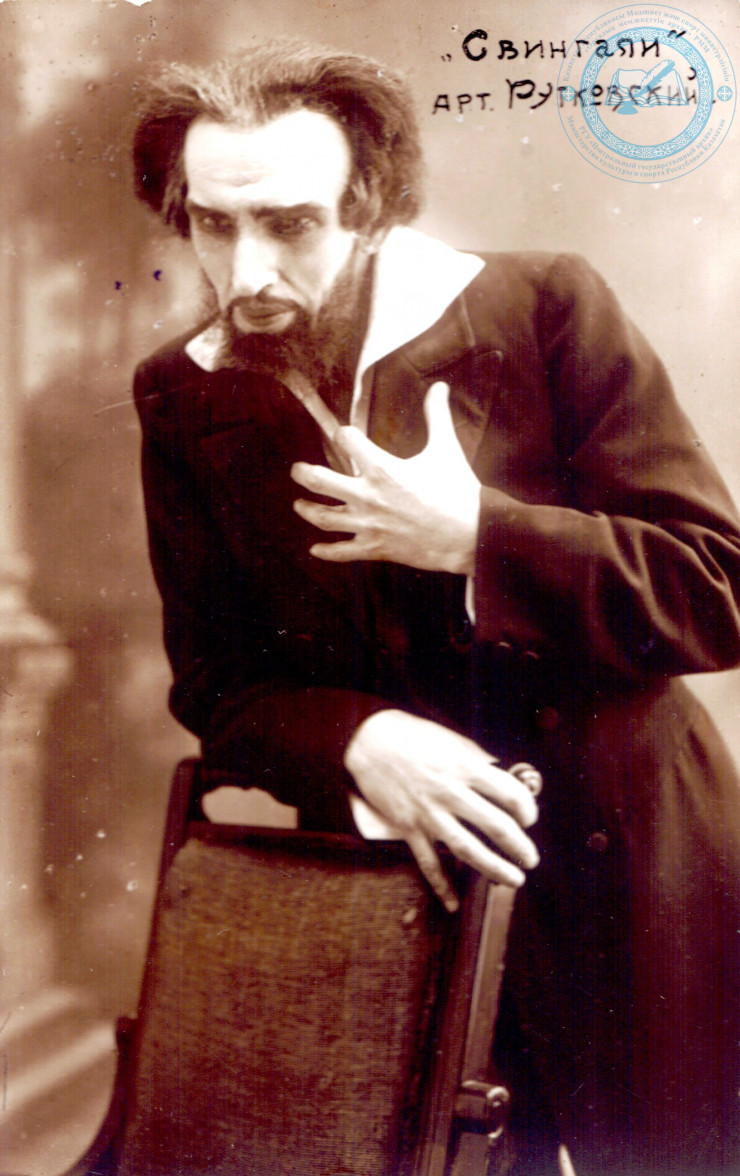 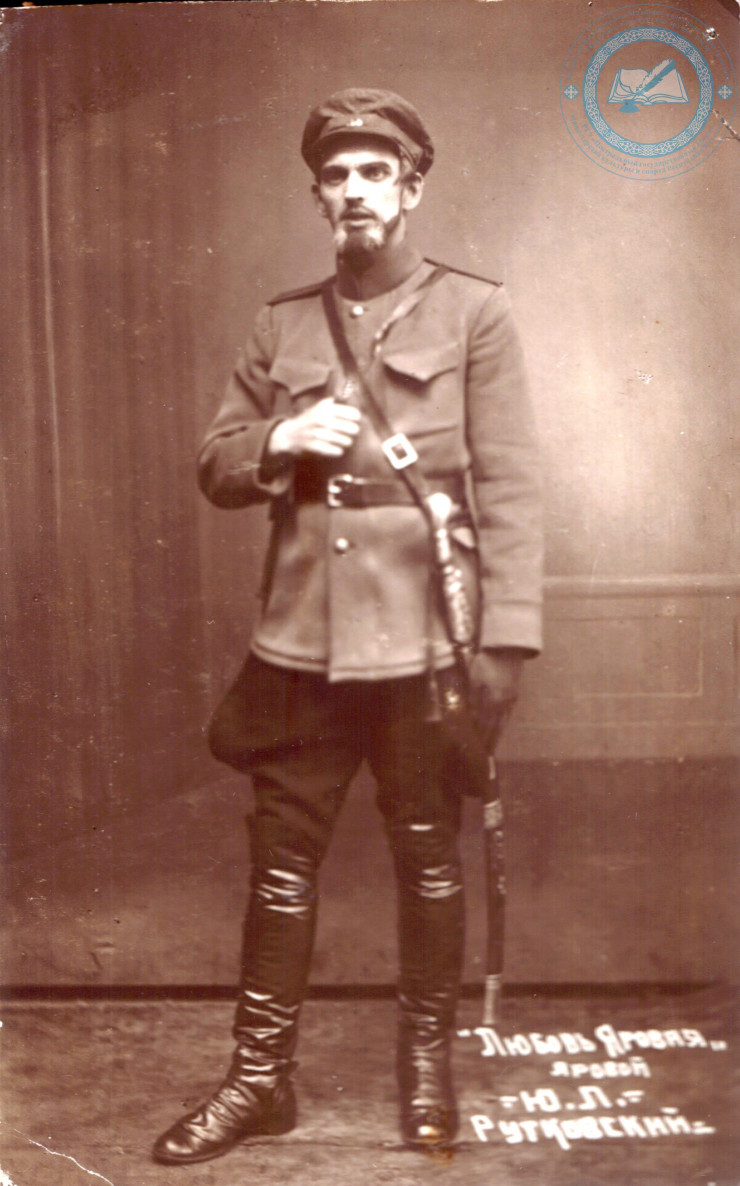 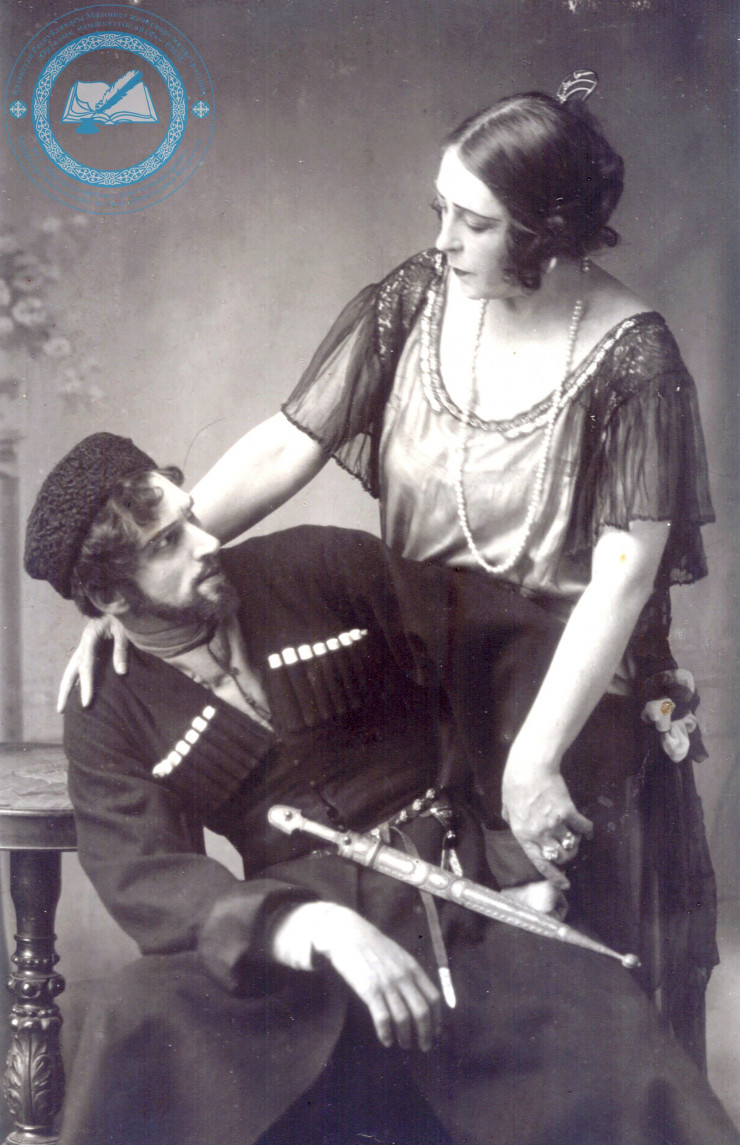 In 1931, Rutkovsky was sent by the Moscow Posredrabis (Intermediary Bureau for the Recruitment and Distribution (Employment) of Actors and Other Theater Workers, which existed in the USSR in the 1920s and 1930s) to Frunze. the position of artistic director of the Russian Drama Theater, where he worked until 1933. 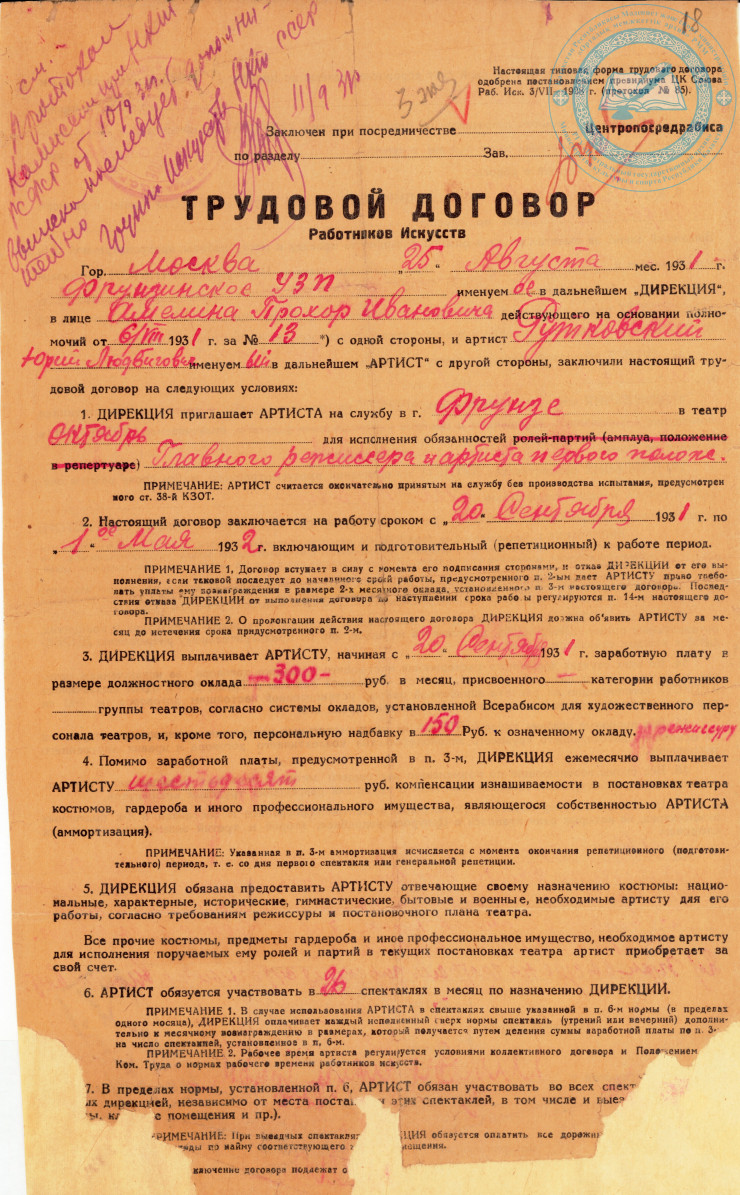 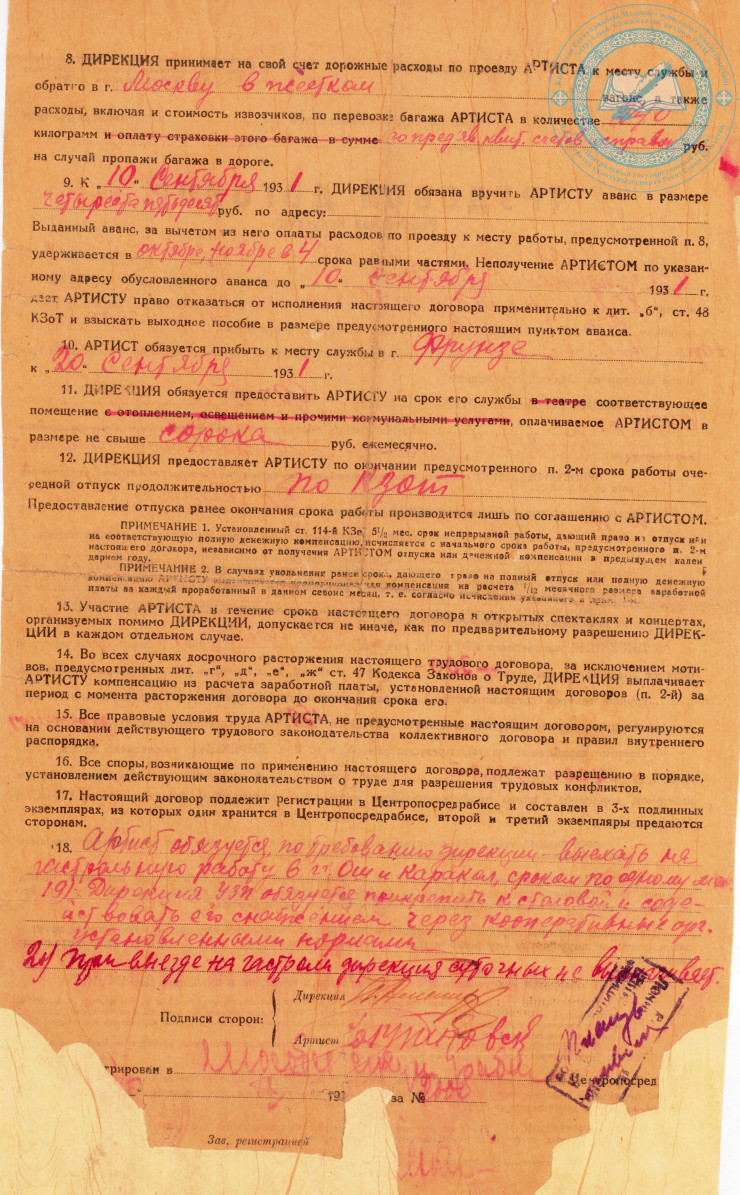 Employment contract of Yu.L. Rutkovsky with the Frunze Directorate of entertainment enterprises. 1931 Central State Administration of the Republic of Kazakhstan. F. 1712. Op. 1.D. 29.

In 1933, Yuri Ludvigovich Rutkovsky was invited by Zhumat Shanin, head of the arts sector of the People’s Commissariat of Education of the KazASSR, to organize and manage the Russian drama theater in Alma-Ata. 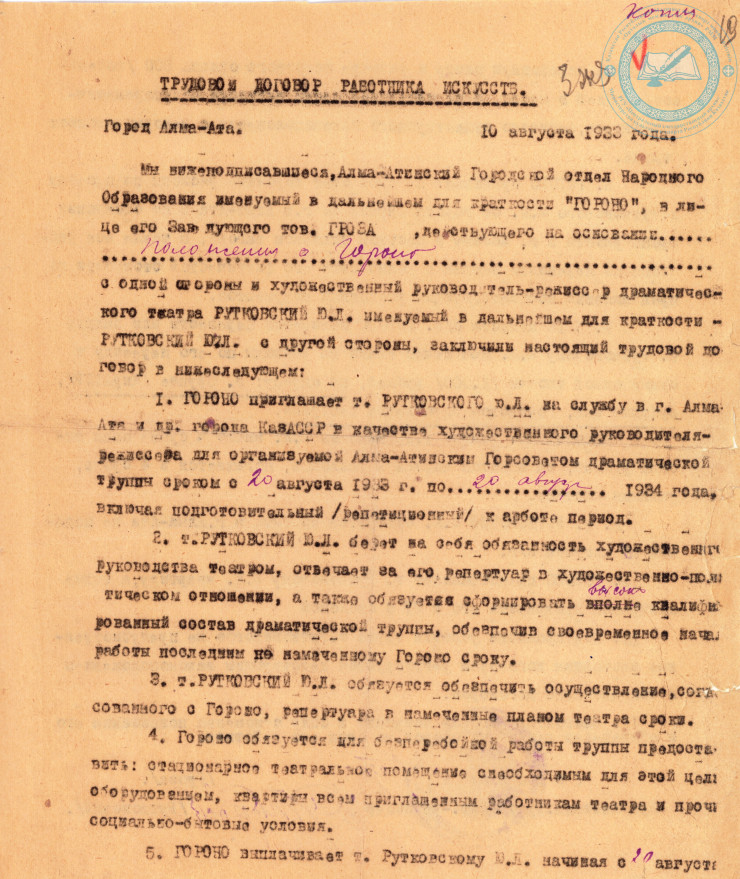 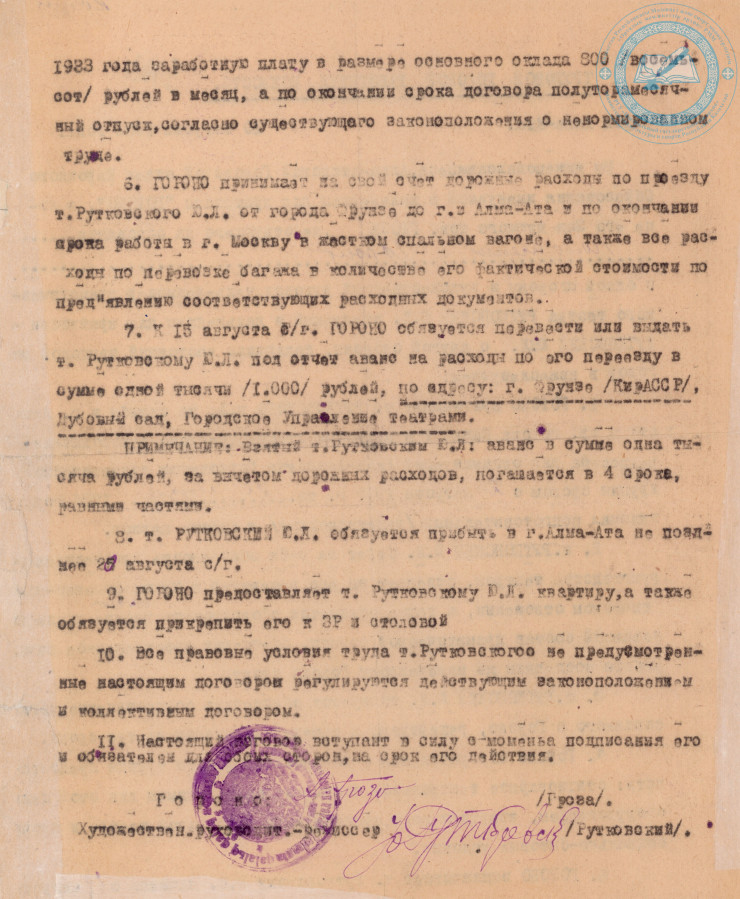 Employment contract of Yu.L. Rutkovsky with the Alma-Ata city department of public education about hiring the artistic director-director of the Russian drama theater. 1933 Central State Administration of the Republic of Kazakhstan. F. 1712. Op. 1.D. 29.

Due to circumstances not foreseen for the theater, the first season in 1933-1934 was opened twice. Due to the lack of theatrical premises, it was assumed that the Russian Drama Theater would open its season at the F.E. Dzerzhinsky, but the construction of the club was not completed on time. The theater began its activity on October 31 in Semipalatinsk. It was the play “Lyubov Yarovaya” based on the play of the same name by K.A. Trenev. Then there were the performances “Egor Bulychev” by M. Gorky, the comedy “Alien Child” by V. Shkvarkin, “The Inspector General” by N.V. Gogol, “Guilty Without Guilt” by A.N. Ostrovsky. With each new performance, the theater was invited to leave for the capital, since the building had already been completed.

In Alma-Ata, the theater opened on January 26, 1934 with the performance “Fear” based on the play by A.N. Afinogenov, staged by Yuri Ludvigovich Rutkovsky.

The artistic director of the theater had many responsibilities: Rutkovsky had to work out a repertoire for a year, draw up production plans for the theater, such as a breakdown and order, a schedule of rehearsals, the distribution of roles among actors, overseeing the performance of the duties of all departments of the theater; check production estimates, put at least 25 percent of the premieres from the main repertoire, be responsible for the artistic and political line of the repertoire, and also participate in performances as a leading actor, and more. 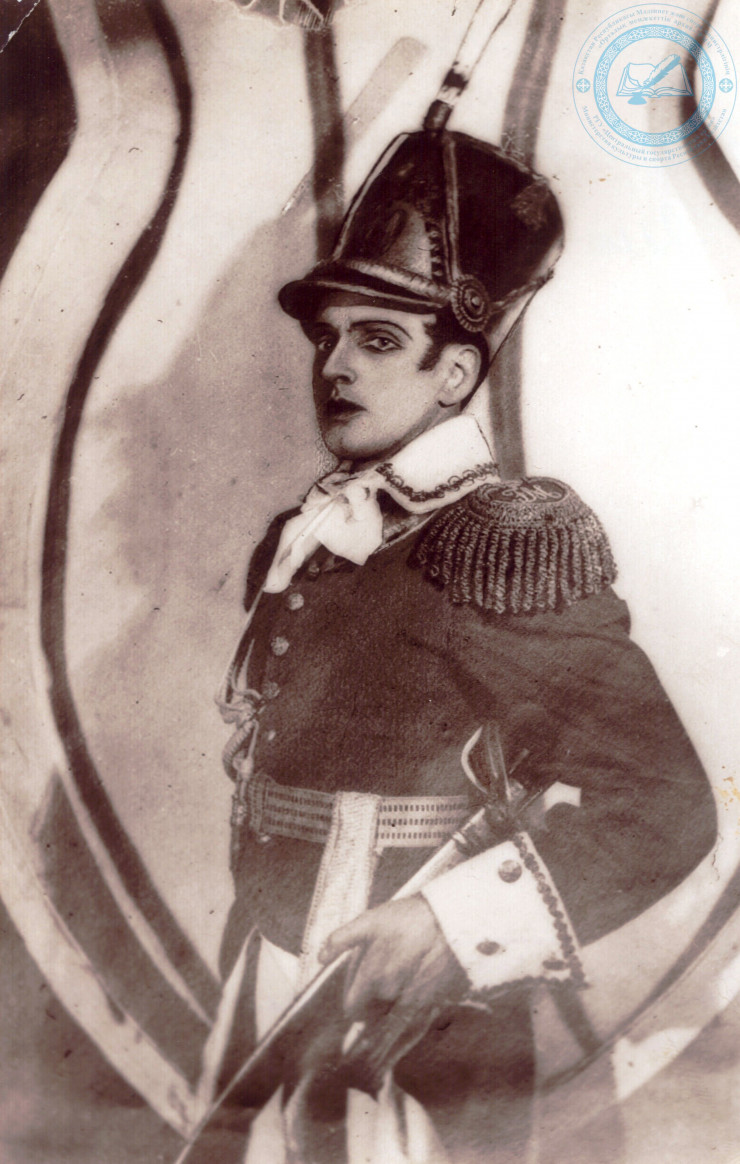 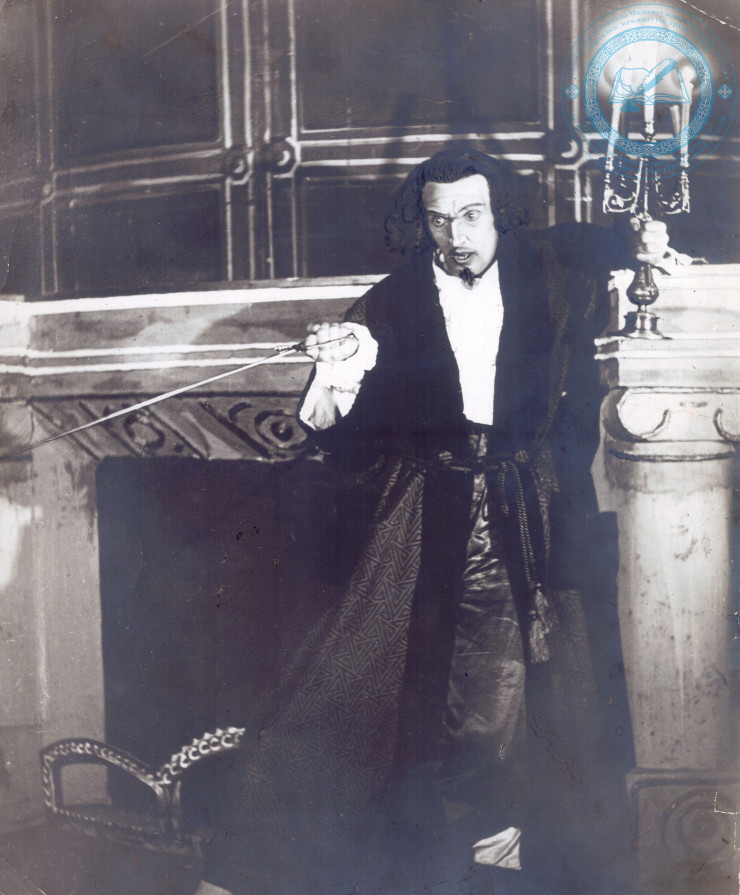 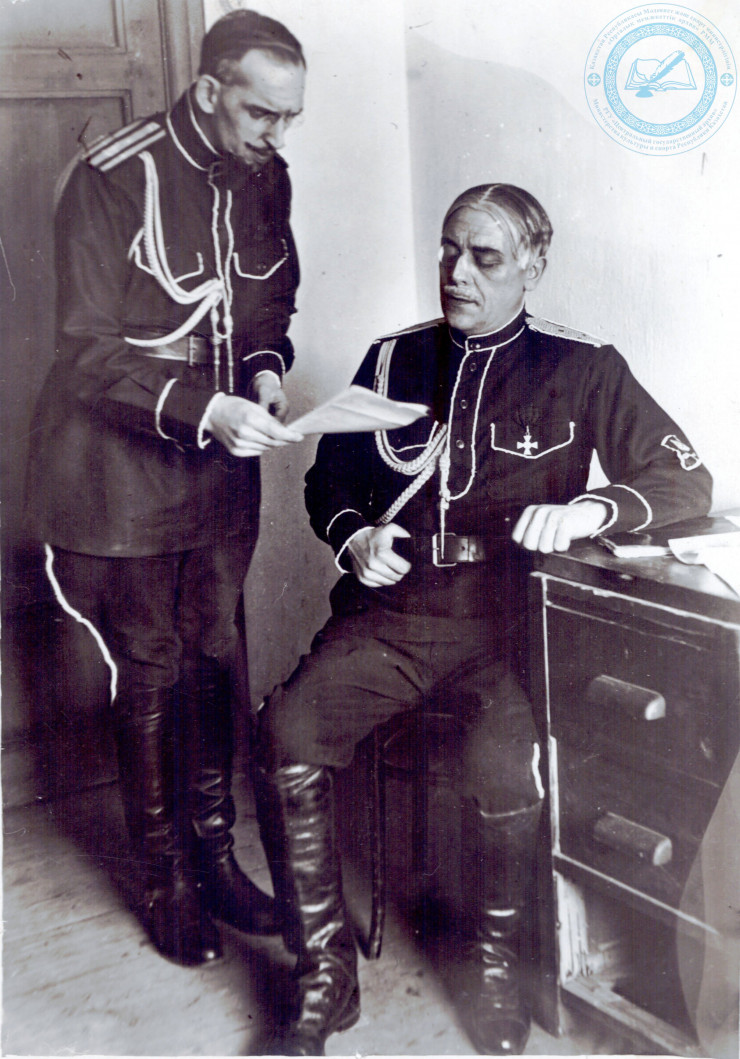 Yu.L. Rutkovsky (left) as Chief of Staff, Stransky as General Marev in the play “Chapaev” based on the novel by D.A. Furmanov. Alma-Ata. 1935 Central State Administration of the Republic of Kazakhstan. F. 1712. Op. 1.D. 50. 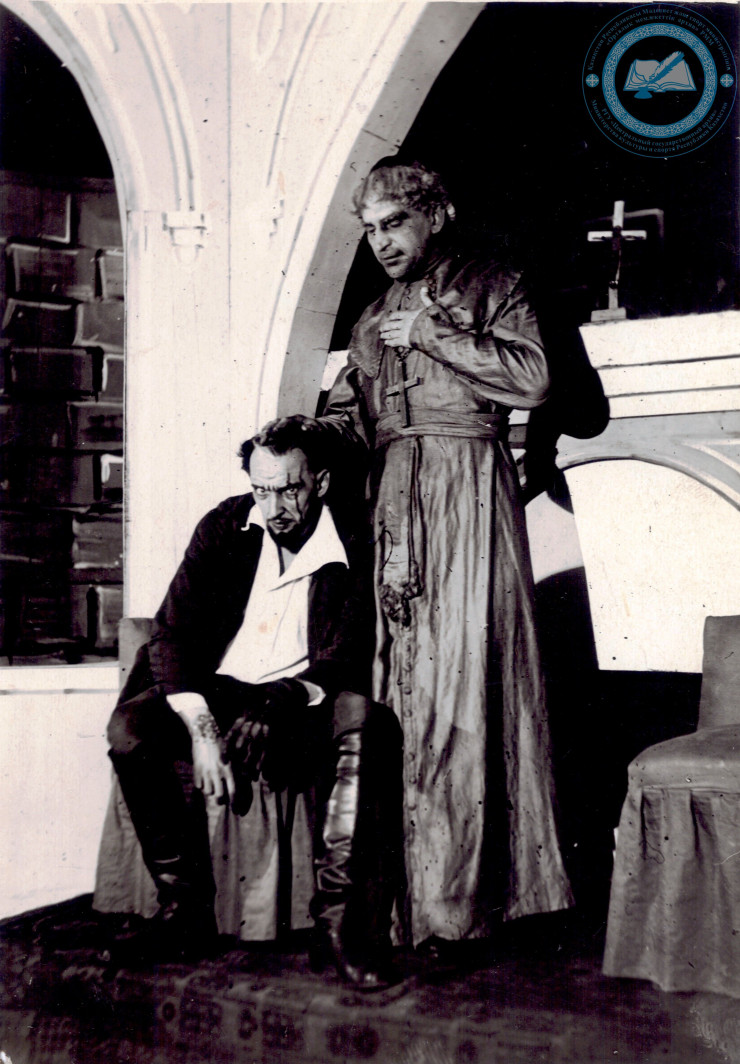 Among the productions of Yu.L. Rutkovsky at the Russian Drama Theater performances based on the plays “Love Yarovaya” by K.A. Trenev, “The Rift” by B.A. Lavrenev, “Aristocrats” by N.F. Pogodin.

In 1934, Rutkovsky successfully staged “Tungi Saryn” by M.O. Auezov at the Kazakh Drama Theater. Directed by M.G. Nasonov fell ill with typhus, and the theater staff turned to Yuri Lyudvigovich for help. The author himself was the translator and consultant on everyday and historical issues. This made the job much easier. After all, the play itself was a complex one of a large number of characters, crowd scenes on a small, technically not equipped stage. As a result of the intensive work of the collective, the premiere of the performance took place on January 1, 1934. The audience enthusiastically accepted “Tungi Saryn”.

In the theatrical season – 1937-1938, the premiere of “Tungi Saryn” – “Night Rolling” took place at the Drama Theater. The director continues to cooperate with the Kazakh Academic Drama Theater – in 1946, “The Inspector General” N.V. Gogol, in 1947 together with Sh.K. Aimanov – “A Man with a Gun” by N.F. Pogodin. 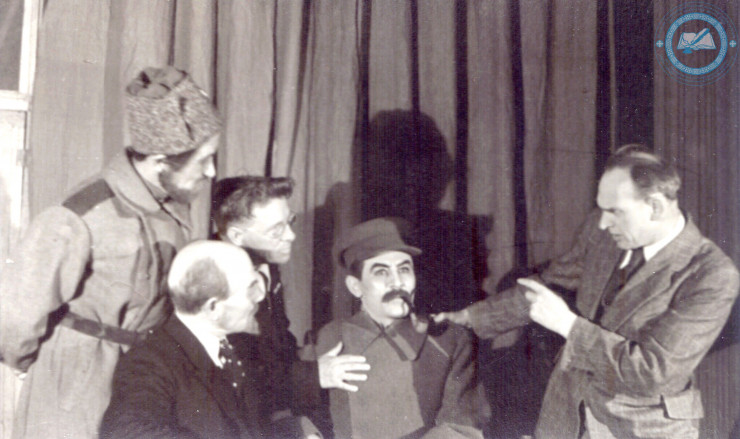 In 1937, Rutkovsky was awarded the title “Honored Artist of the Kazakh SSR”. 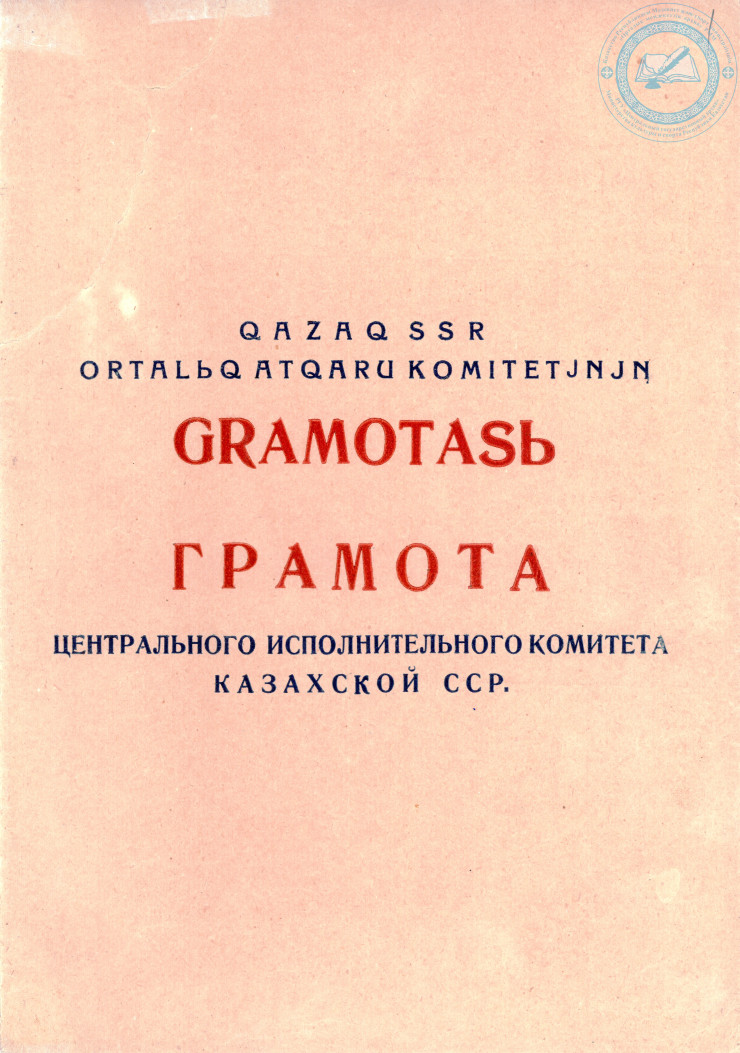 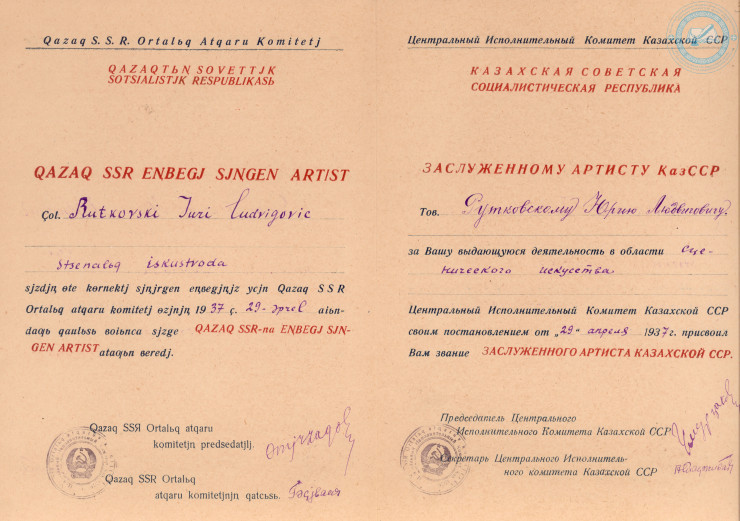 Diploma of the Central Executive Committee of the Kazakh SSR on assignment to Rutkovsky Yu.L. title “Honored Artist of the Kazakh SSR”, 1937 Central State Administration of the Republic of Kazakhstan. F. 1712

Rutkovsky worked at the Russian Drama Theater until 1939. In 1937-1939 he taught a course in directing at the Kazakh Theater School. 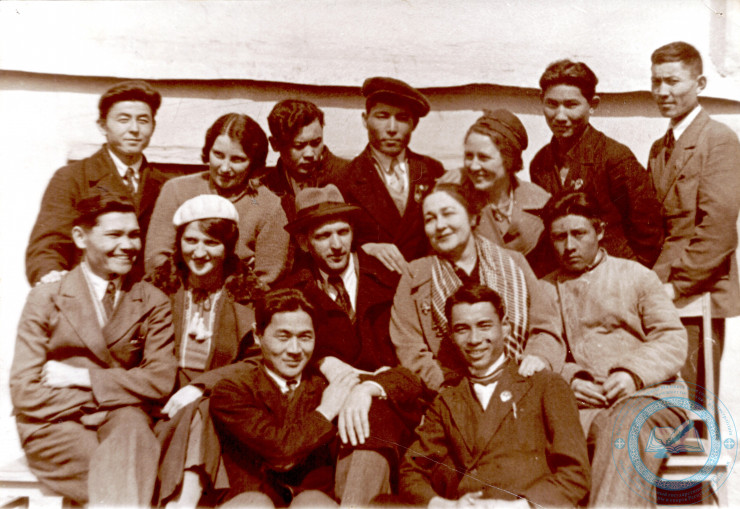 Rutkovsky was repeatedly sent to provide creative assistance to the regional theaters of the republic for staging major dramatic works – “Othello” (1943), “Romeo and Juliet” (1947), V. Shakespeare, “Mashenka” by A.N. Afinogenov (1943) at the Kustanai Russian Drama Theater.

At the beginning of 1939, by order of the Department of Arts Affairs, the Kazakh SSR was sent to the Kazakh Drama Theater in Chimkent with a certain standard: to strengthen the creative positions of the young team, to prepare a director-director from among the creative staff.

In 1940, he was appointed head of the theater department of the Department of Arts of the Kazakh SSR, where he worked for a year and a half, then he was sent as a production director to the Kazakh Academic Opera and Ballet Theater (the name of Abai will be assigned in 1945). 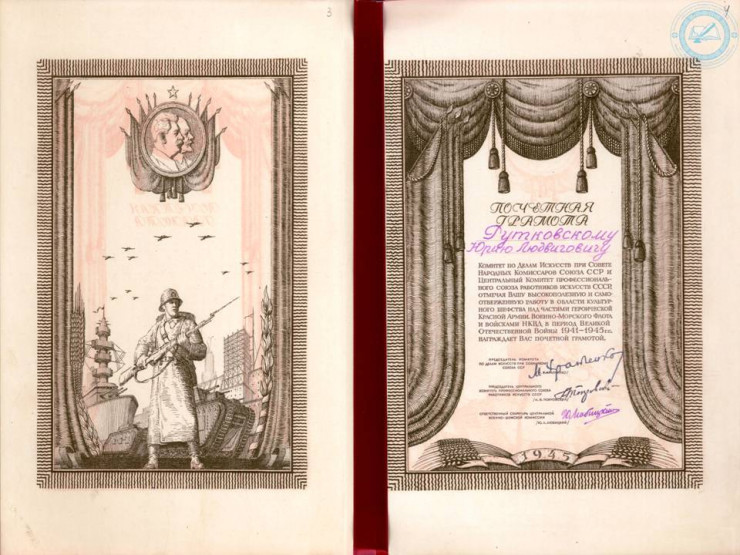 Certificate of Honor for Arts under the People’s Commissars of the USSR Yu.L. Rutkovsky. 1945 Central State Administration of the Republic of Kazakhstan. F. 1712. Op. 1.D. 31.

Yu.L. Rutkovsky staged thirty performances on top: “Othello”, “Rigoletto”, “Troubadour” by G. Verdi, “Carmen” by J. Bizet, “The Barber of Seville” by G. Rossini, “Romeo and Juliet” by C. Gounod, “The Tsar’s Bride” .A. Rimsky-Korsakov, “Ruslan and Lyudmila” by M.I. Glinka, “The Queen of Spades” by P.I. Tchaikovsky, “Young Guard” by Yu.S. Meitus and others. 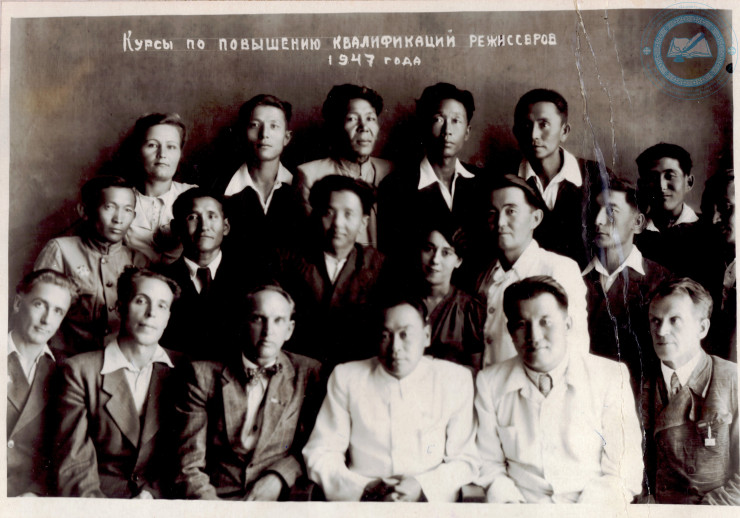 specialist of the highest qualification level:

archivist of the highest category of the department

on working with archives and historical documents

Alikhanov called the opening date of the bath in the Neman

Clients of Russian Standard Bank can now get insurance against accidents online, including sports risks. ARB: Association of Russian Banks